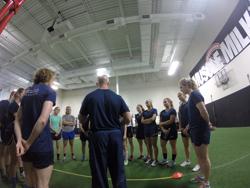 Of all the ways Robb Stauber uses to measure the changes in women’s ice hockey since its 1998 Olympic debut, the most insightful might be the one he can’t quantify.

“Opinion wise, over the past 15-20 years, it’s been slow,” said the 10-year-pro goalie, 47, who spent five years in the NHL with the Los Angeles Kings and Buffalo Sabres. “But it’s been developing. For some of my friends, teammates ... maybe (women’s hockey) was never the greatest thing for the eye, but for other guys who engaged, became part of it — either their daughters are playing, or they coach — (they) feel they’ve advanced the game in some way by coaching, by their knowledge.”

Stauber, the goaltending coach for the U.S. women’s national team for the past five years, has other measures, too: speed of play, stick handling, accuracy and speed of shots. Another was this past weekend’s goalie camp for Team USA, the first for the women, where 18 of the country’s best — from ages 16 to 29 — gathered in Blaine, Minnesota, for a four-day series of classes, drills and evaluations.

The purpose of the camp was not only to assess the various attendees, their strengths and their weaknesses, Stauber said, but also to introduce them to Team USA and give them a sense of what the coaching staff is looking for and what it will take to make the Olympic or world championships roster.