After a day off yesterday, Team USA returned to the ice at the KVIK Hockey Arena in Herning, Denmark, for practice ahead of tomorrow's game against Latvia. Following practice, players and head coach Jeff Blashill took part in media availability. The team will return to the hotel, rest up before dinner and get ready for tomorrow's game.

KEEP IMPROVING
One message the coaching staff sent to its players was the reminder to keep improving as it turns its attention to Latvia.
"Now we get to regroup and get ready for what we know will be a real tough Latvia game," said Blashill. "They play extremely hard so we know it will be a good challenge tomorrow." 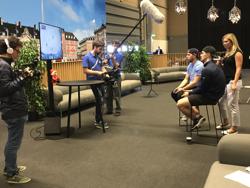 OFF DAY FILLED WITH OUTDOOR ACTIVITIES
Yesterday, the team was given the day off to explore Herning and its nearby cities here in Denmark. While some staff visited nearby cities by train or bus, players broke up the day with a number of outdoor activities. A number of players went fishing, some went for a long bike ride and others played golf. Some relaxed with a movie at a nearby theater before walking the streets of Herning.

LOOK AHEAD: LATVIA, 10:15 A.M. ET
The United States (2-1-0-0/W-OTW-OTL-L) returns to tournament action tomorrow (May 10) when it takes on Latvia (1-1-0-1/W-OTW-OTL-L). The game will be televised live on NHL Network at 4:15 p.m. local time (10:15 a.m. ET.). With both teams having played three games and being off today, the U.S. will enter the game with eight points, currently second in Group B, while Latvia holds five points, which currently places them fourth.