It was a significant night in the long, storied career of Pittsburgh Penguins forward Matt Cullen.

So the Penguins decided to throw a party for the 42-year-old and his family.

During the team’s March 5 home game against the Florida Panthers, the 21-year league veteran became just the second American-born player in NHL history to skate in 1,500 career regular-season games.

“I didn’t really have expectations going into it, but it was pretty overwhelming, honestly,” Cullen said. “It was way more than I would ever deserve or expect. It just really took me off-guard, and it means a lot that everybody would go through all that trouble for me.”

In more than 100 years of NHL history, Chris Chelios was the only American-born player to reach 1,500 career regular-season games until Cullen hit the milestone. Only 20 total NHL players have reached the mark in general.

As a second-round pick in the 1997 NHL Draft, Cullen has played 1,632 games total, including playoffs, for eight teams with three Stanley Cup championships.

“It’s such a great milestone, and there aren’t too many people that reach it,” said Penguins coach Mike Sullivan. “I think it’s a reflection of his passion for the game and his professionalism. There aren’t too many guys that take care of themselves and train the way he does, and live the way he does in order to give himself the best opportunity to continue to play and sustain his performance.”

The Penguins recognized their teammate for his longevity during the pregame warm-up, all wearing jerseys bearing Cullen’s name and No. 7.

“It was my best warm-up of the year,” Cullen joked. “It was pretty funny though. That was a really classy touch. I never saw that before.”

Cullen’s wife Bridget, and his three sons Brooks, Wyatt and Joey, were on the ice during a pregame ceremony to honor the longtime NHL veteran. The ceremony included a video tribute in which Chelios congratulated Cullen on the milestone. 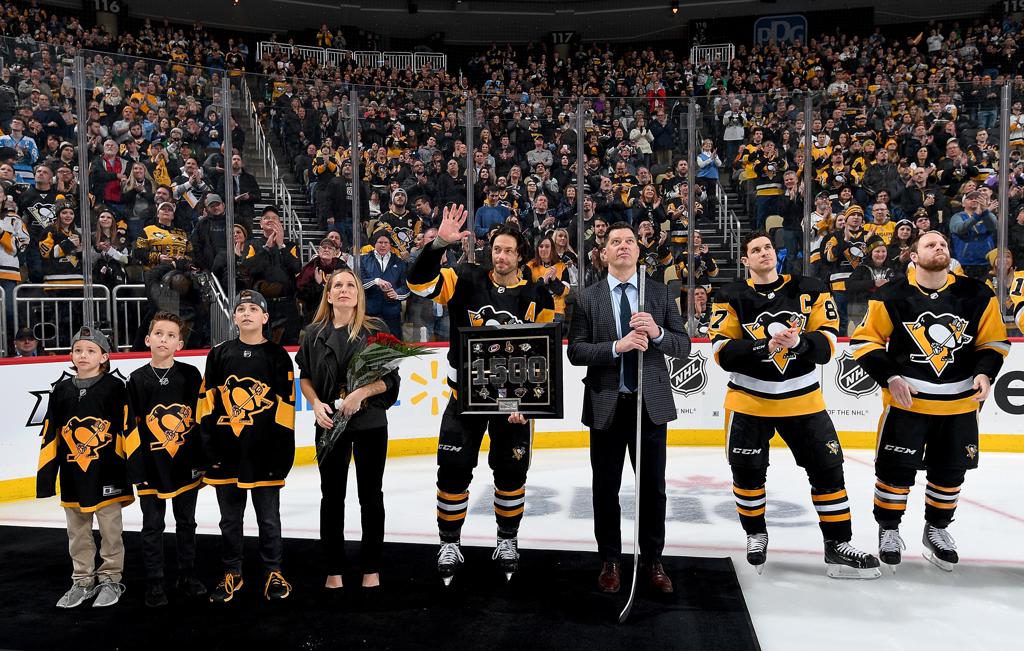 “They’re probably still in it,” Cullen said after the game. “It was pretty cool, and obviously the guys went out of their way to do that, which is beyond anything I could ever imagine. It was beyond words, and I don’t even know what to say. The whole thing just blew me away.”

Cullen, who started the game and took the opening faceoff, also wore three different jerseys — one for each period — against Florida, a meaningful keepsake for each one of his sons.

“Anytime as a dad, when I can share an experience like that with my boys, who love the game, it’s just special,” Cullen said.

Cullen’s sons have enjoyed following their father’s journey, too.

“It has been kind of fun the last stretch with my boys and the age they are,” Cullen said. “After every game, they show me the list and anyone I passed and things like that. It’s been fun to go through that experience with them being so into it.”

Cullen, a native of Virginia, Minnesota, is 20th all-time in games played, and this season he could catch long-time Detroit Red Wings captain Steve Yzerman, who is currently in 19th place with 1,514. Cullen passed Mike Modano, a former Minnesota North Stars and Dallas Stars great, to move into second place among American-born players.

“He was a guy I looked up to and loved watching growing up and cheering for the Stars,” Cullen said. “It was pretty cool.”

And it has been a long road to this point for Cullen, who played his first game more than 22 years ago as a member of the Anaheim Mighty Ducks on Oct. 28, 1997, at Toronto’s Maple Leaf Gardens. The Ducks are no longer “Mighty,” Maple Leaf Gardens is a grocery store and the NHL is five teams larger.

What Matt Cullen has done was achieved by taking each day one-at-a-time, being disciplined in his training, and forging strong bonds with supportive teammates and family along the way.

Let's step back and appreciate the past 21 seasons. pic.twitter.com/tZRNKOHsCA

Among career highlights like playing alongside legends such as Jaromir Jagr and Paul Kariya, Cullen won back-to-back Stanley Cups with the Penguins in 2016 and ’17 before playing one year with his hometown Minnesota Wild. Cullen, who also won a Stanley Cup in Carolina, considered retiring, but he returned to Pittsburgh with his family for another memorable season.

“I think as you get older you appreciate these things more,” Cullen said. “I know when I’m done and I’m sitting at home, I’ll appreciate it even more. It’s pretty special what the Penguins do for a guy like me. They make me feel special and go out of their way to make my family feel special. It’s part of why I love it in Pittsburgh so much.”