On a roster with 12 NHL first-round picks, undrafted trio reinforces there are many paths in hockey

Calgary Flames forward Derek Ryan understands, maybe more than anyone, that there isn’t one particular set path to the National Hockey League.

Ryan is one of three players, in addition to forwards Luke Glendening (Detroit Red Wings) and Frank Vatrano (Florida Panthers), who reached the NHL as undrafted free agents. They established themselves not only as NHL regulars, but also as members of the U.S. Men’s National Team that is competing in the 2019 International Ice Hockey Federation (IIHF) Men’s World Championship in Kosice and Bratislava, Slovakia.

“There are so many different paths you can take to get to the NHL level, or get to the level where you’re representing your country,” Ryan said. “There’s no right answer because every kid is unique. If you can follow your own journey and make it, it makes it all that much sweeter, and for a guy like myself, I can definitely attest to that.”

Ryan, a native of Spokane, Washington, started his professional career in Europe and spent time in the Austrian Hockey League and Swedish Hockey League, picking up a most valuable player award in each.

Ryan earned a one-year, two-way contract with the Carolina Hurricanes in 2015, and ended up flourishing there for three seasons, before signing a three-year deal with Calgary prior to this past season.

This is the second time the 32-year-old has had the opportunity to represent his country with the national team. 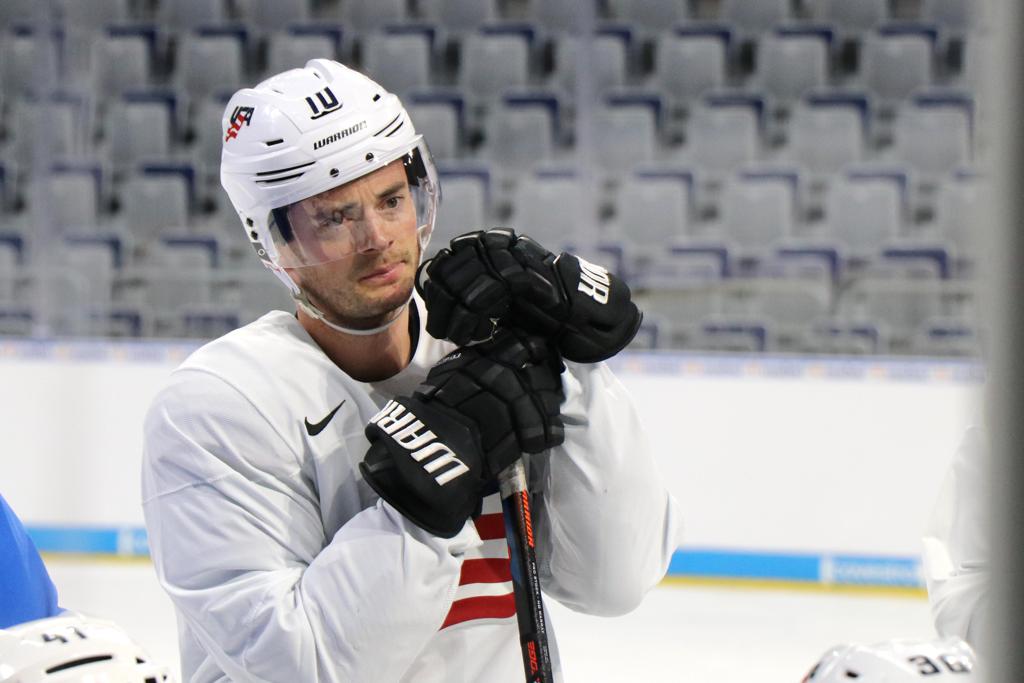 Ryan looks on as head coach Jeff Blashill explains a drill during practice at Steel Arena in Kosice, Slovakia

“It’s been a pretty wild journey, and it’s pretty crazy when I look back on all the different steps that I had,” Ryan said. “It’s not that I didn’t have faith, but I just continued to get better, I adapted to the different leagues I played in, continued to learn from other guys I played with and played against, and just never gave up.”

Glendening, a native of East Grand Rapids, Michigan, opened his professional career with Grand Rapids of the American Hockey League after a highly successful collegiate career at the University of Michigan. He also spent time in the ECHL before signing a one-year, two-way contract with the Red Wings, where he has spent the past six seasons. 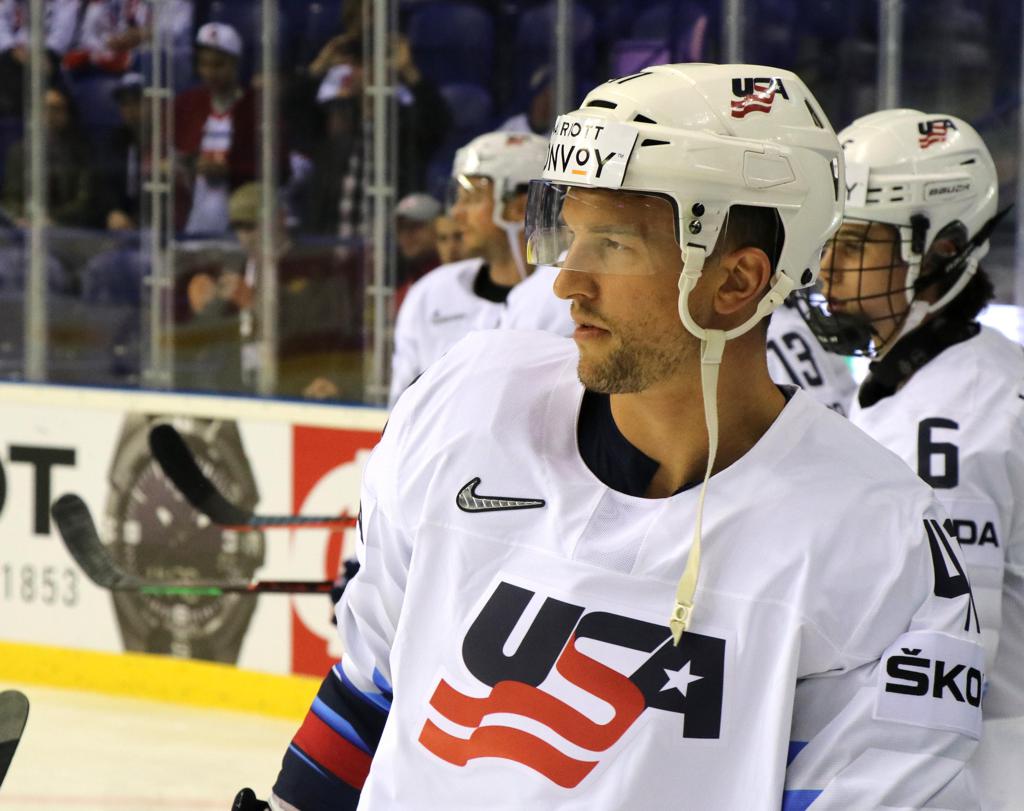 Glendening during warmups ahead of Team USA's opening game in the 2019 IIHF Men's World Championship.

“I think everyone has their own unique way of getting here, and there are some guys who have taken similar paths, but no one is exactly the same,” Glendening said. “I think it’s a testament that if you really believe in yourself and you’re willing to chase your dreams, anything can happen.”

The 30-year-old Glendening already fulfilled a dream by playing for his hometown Red Wings. He crossed another off the list when he was named to the national team for the first time this year.

“Follow your dream and don’t be afraid to dream big,” Glendening said. “When I was 5 years old, I wanted to play in the NHL. As I got older, it was looking like less and less of a reality, but I pursued it with all of my heart and passion, I carved out a niche for myself and that has gotten me to where I’m at. I’m obviously really thankful and blessed to be where I’m at, but I just continue to battle.”

The same can be said for Vatrano, a native of East Longmeadow, Massachusetts, who is playing for the national team for the second time in his career.

The 25-year-old Vatrano spent time with USA Hockey's National Team Development Program (NTDP) before playing college hockey at the University of Massachusetts Amherst. He signed a three-year entry-level contract with Boston and spent two seasons in the American Hockey League before catching on with the Bruins.

“I’ve had to fight for everything I have,” Vatrano said. “I was taught at a young age that you have to earn what you get, and for me, I’m just trying to work hard and earn my spot every single night. When you make it to the NHL, or any other level before that, you always have to earn your spot. There’s always someone coming after your spot, and you have to show people that are making personnel decisions that you can play at a high level.”

Vatrano, who is playing in his second World Championship, enjoyed success with the Bruins, but he flourished following a trade to Florida where he set career highs in goals and points in the 2018-19 season.

That helped establish Vatrano as an NHL regular, much like Ryan and Glendening did in Calgary and Detroit. The hard work also earned the three NHL stars spots on the national team, playing alongside 12 NHL first-round draft picks. It’s a position the three former undrafted free agents do not take lightly considering the work it has taken to reach this point.

“You never know if you’re going to get a chance to wear this jersey, so to be able to do it is something special,” Glendening said. “I’m very blessed and honored to have this opportunity, and just to know that I have a chance to play for the U.S. is an amazing feeling. To be with this group and all the great players we have is outstanding.” 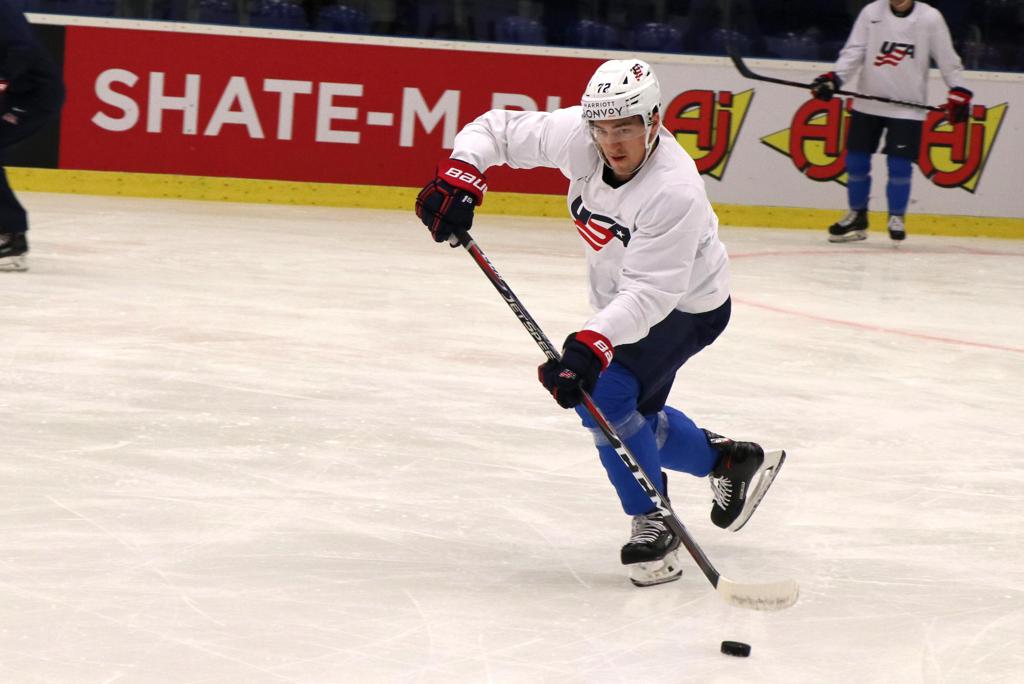 Vatrano makes a pass to a teammate during practice on the Steel Arena practice sheet.