In the day's first tilt here in Plymouth, Michigan, Finland stormed to an 8-3 victory over Canada. For both game recaps, scroll below.

Showcase action resumes on Friday (Aug. 2). The double-headers on Friday and Saturday (Aug. 3), will be broadcast live on NHL Network.

The U.S. opened the scoring just 1:09 into the game off the stick of John Beecher (Elmira, N.Y.). The play started in the U.S. zone where Blake McLaughlin (Grand Rapids, Minn.) sent a clearing pass up the ice to Kaliyev, who drifted into Sweden’s zone before sending a cross-ice feed to Beecher for a one-timer goal.

Knight was called upon early, making back-to-back saves during a Sweden man-advantage to keep the U.S. up, 1-0. His best shorthanded save came when a Swedish passing play down low forced him from right-to-left before one extra pass to Tobias Bjornfot in the slot led to an attempt Knight batted away with his blocker by sliding back to his right.

The goaltender was called upon again later in the period when a failed two-on-one opportunity by Sweden ended with a pass back to a trailing Philip Broberg for a chance Knight was able to collect cleanly.

With 8:45 to play in the frame, Trevor Zegras (Bedford, N.Y.) and Jacob Pivonka (Woodridge, Ill.) nearly connected for a tally when Zegras generated a turnover at the left wall and found Pivonka alone in front for a tap-in try that was denied.

The middle stanza opened just like the first with the U.S. capitalizing a minute into play. This time, Jordan Harris (Haverhill, Mass.) intercepted a pass at the U.S. blue line, skated up the ice and sent a high shot on goal that went off Sweden’s goaltender, Olof Lindbom, and sailed in the air where Kaliyev batted the puck into goal for a 2-0 U.S. lead.

Three minutes later, Beecher nearly netted his second of the game with a breakaway chance but Lindbom stood tall to make the save.

With just :14 to play in the frame, Kaliyev extended Team USA’s lead to 3-0 when he one-timed a rebound off a shot from the point by Zac Jones (Glen Valley, Va.). Matthew Boldy (Millis, Mass.) also collected an assist on the play.

In the final stanza, McLaughlin added to the U.S. lead 2:26 into the frame by finishing a two-on-one opportunity with Trevor Janicke (Maple Grove, Minn.). At the 8:13 mark, Nick Robertson (Northville, Mich.) stole the puck at the Swedish blue line, skated in uncontested and faked the Swedish defender to the right before slipping the puck into the empty net to make it 5-0.

With under two minutes to go in the third, Zegras collected a pass from Pivonka and fired it home to push the score to 6-0 in favor of the U.S.

Knight finished with 22 saves to secure the wing and register the first complete shutout of the 2019 World Junior Summer Showcase.

Finland opened the scoring just 1:33 into the opening period off the stick of Toni Utunen. After Sampo Ranta held the puck in the offensive zone at the right point, he fired a saucer pass to Utunen who was waiting at the opposite end of the blue line before finding the top right corner with a wrist shot to give the Finns a 1-0 lead.

Finland doubled its lead at the 8:45 mark when Patrik Puistola beat Colten Ellis after a nice passing play from Kristian Tanus and Peetro Seppala.

Finland continued to apply pressure to the Canadians and nearly extended its lead to three just a minute later when Samuel Salonen found himself on a breakaway, but Ellis stood tall in the crease and made a glove save.

With 8:01 to play in the frame, Joonas Oden gave Finland a three-goal lead with a powerplay tally. After a tripping penalty was assessed to Canada, the ensuing powerplay started with Tanus controlling the puck at the right circle before feeding a pass across the seam to Honka. Looking to the back post, Anttoni Honka sent a pass through the crease the found Oden, who was waiting at the back door to finish the play.

Just 1:54 after the third goal, Finland added a fourth tally off the stick of Lassi Thomson. With under two minutes to play in the frame, Ranta tallied to push Finland's lead to 5-0.

The Finns continued to apply pressure in the Canadian zone at the start of the second period and capitalized just 2:01 into the stanza to bring its advantage to six. Santeri Salmela controlled the puck at the center point before firing a shot on goal that was tipped by Aku Raty into the back of the net.

After Canada was whistled for a high sticking penalty just 42 seconds after the goal, Finland went back to the power play where it would capitalize again to take a 7-0 lead off a one-timer slapshot from Honka.

Canada responded 3:18 later when Serron Noel took a pass from Jett Woo before making a nice move to the forehand and scoring Canada’s first goal of the contest. Noel then tallied again just four minutes after with a tip-in goal off a shot from Johnny Tychonick.

Connor McMichael added a third goal for Canada at the 19:02 mark of the second period. After Finland was assessed a penalty for tripping, McMichael took advantage of a turnover in the slot before firing a wrist shot past Annunen to close out the second stanza.

Utunen connected again in the third with 3:50 to play in regulation to account for the 8-3 final. 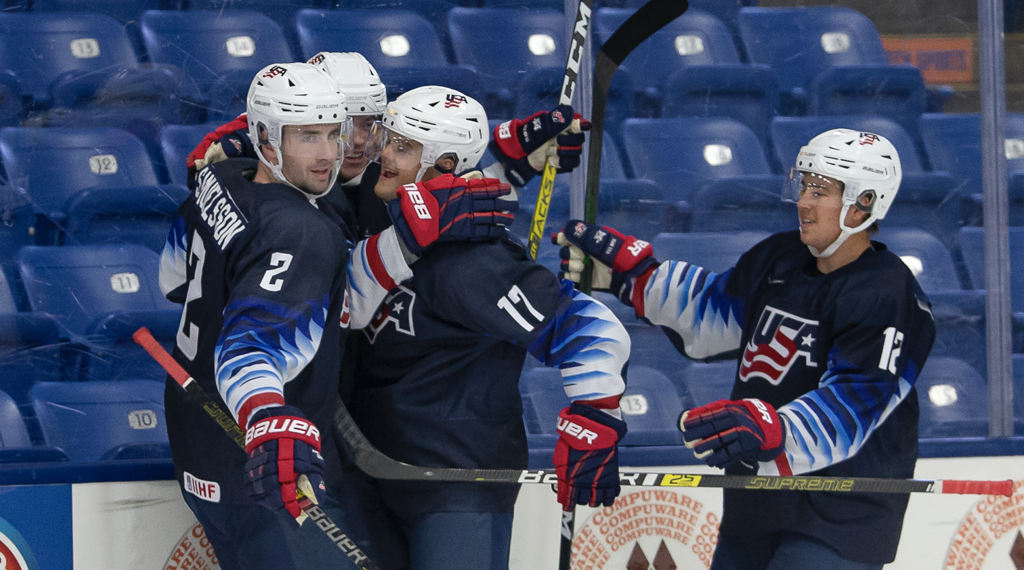