SUNRISE, Fla. — Joe Pavelski remembers playing in his very first NHL game back in 2006 because the journey to get there would probably leave most travelers jet-lagged and numb.

He received the phone call at 3 a.m. and then was on a flight from Boston to San Francisco. It was the day before Thanksgiving, which is usually considered the busiest travel day on the holiday calendar for Americans.

Pavelski landed, got to the hotel, grabbed lunch and before he knew it, he was skating alongside first-line teammates Patrick Marleau and Steve Bernier of the San Jose Sharks. Pavelski would score in that first game and then was finally rewarded with some much-needed sleep.

His immediate emergence in the NHL may have seemed like a dream and he’s still living it out today.

“There was an opportunity that sort of presented itself and I was able to take advantage of it,” Pavelski said when reflecting on the beginning of his professional career. “I got on a roll early and never really looked back.” Fast forward 14 years.

Pavelski played in his 1,000th career NHL game on Friday night when his Dallas Stars fell to the Florida Panthers, 7-4.

A veteran of the 2010 and 2014 Olympic Winter Games and captain of the U.S. team at the 2016 World Cup of Hockey, Pavelski joined the Stars this past offseason. The move came after a highly successful stint with his first team, the Sharks, where he helped them to the playoffs 11 times during his 13 years with the club.

But the 35-year-old Pavelski admitted he does not like to crunch too many numbers as he definitely puts more stock on overall team success compared to any individual milestone. 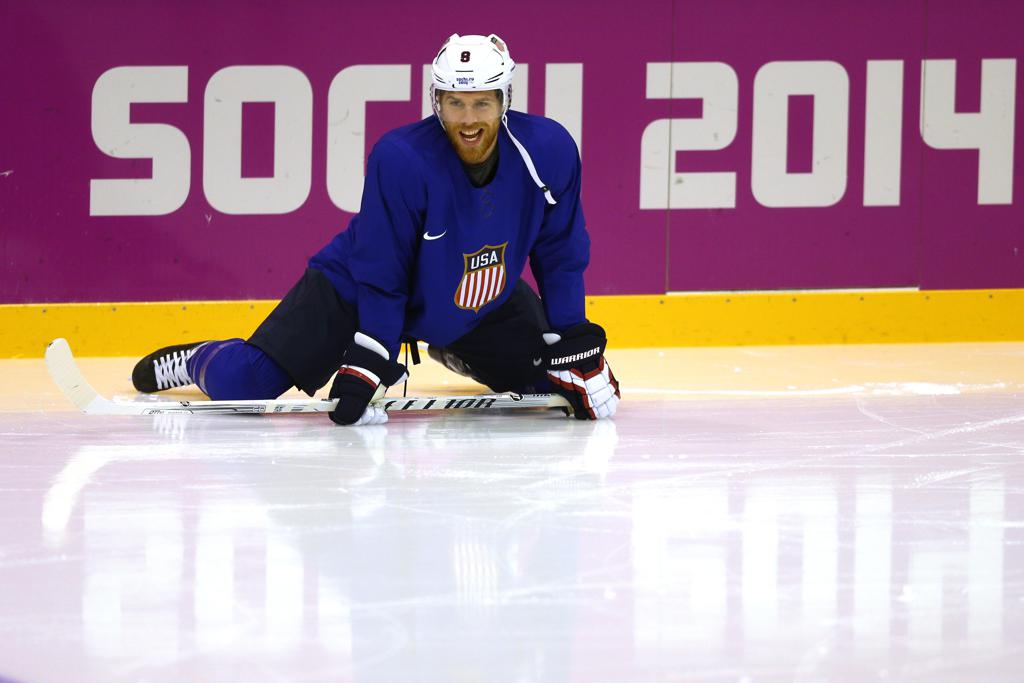 Pavelski stretches during a practice session at the Sochi 2014 Winter Olympics at Bolshoy Ice Dome.

“You never set out to play 1,000 games so a lot of things have to go right,” he said inside the visitors’ locker room at the BB&T Center. “You know what, it’s an 82-game season, so if you can play in all 82, that’s a nice number. But it’s just numbers. Just little things that guys can talk about along the way.”

And Pavelski has been surrounded by some strong teammates, who know a little something about longevity. He credited mentors like Marleau and Joe Thornton for not only showing him what it takes to compete at the highest level in the NHL, but how to stay on top.

“Playing with guys like Joe [Thornton] and Patty [Marleau] has been so great,” said Pavelski, a team captain, who did not miss a regular season game during seven of his 13 years with the Sharks.

“A majority of my career was in San Jose. It’s the organization that I came up in and I’ve had so many great teammates to learn from.”

When looking at the all-time list of NHL players with 1,000 games played, Thornton and Marleau are the only active NHL players among the top 20. Both spent significant time in San Jose with Pavelski and both were on the opposing side at the 2010 Vancouver Winter Olympics.

It was also Thornton who helped Pavelski off the ice after he suffered a head injury during one of the Sharks’ first-round playoff games against the Las Vegas Golden Knights last season.

Immediately after Pavelski won a faceoff, he absorbed a cross-check and landed on his head. Pavelski left the game and needed stitches but it resulted in a five-minute major penalty, and by the time it was over the Sharks had taken a 4-3 lead. They ultimately won 5-4 in overtime to advance to the second round.

“The boys, they got together and said, this is for Pavs,” Thornton said after that game. “We love him and it was just a matter of will, and we willed that one for him.”

Pavelski did not blame Stastny but he did miss two weeks of playoff hockey before returning and scoring during Game 7 of their second-round series against the Colorado Avalanche.

After signing a three-year, $21 million contract with the Stars in July, an obvious question is how long does he expect to compete at the highest level?

“Looking back, this has been a game I have always loved,” he said. “My goal is still the same: Show up every day with great people around me and keep competing.”

Once again, he didn’t want to talk numbers nor did he put an expiration date on a celebrated career.

“It’s been a fun ride so far,” Pavelski said. “And I think I have a lot of hockey still left.”