Ten potential returners from this year's team eligible for 2021

Five returning silver-medal winners from the 2019 U.S. National Junior Team returned in 2020 in hopes to capture Team USA’s fifth gold medal. After losing the gold-medal game to Finland in the final two minutes last year, veterans knew what was at stake and pushed everyone to reach gold-medal status in 2020.

The U.S. was placed in Group B, titled the “Group of Death” by many in the media, alongside Canada, Czech Republic, Germany and Russia. Three of four preliminary games were sell outs, including hostile crowds against Canada and Czech Republic. After preliminary-round play, including two back-to-back sets, the U.S. finished second in the group and was matched up against Finland in quarterfinals. It was the first time since 2015 that both gold-medal game teams from the year prior would square off in quarterfinals. Ultimately, Finland won a defensive stalemate, 1-0, from a power-play goal in the third period. 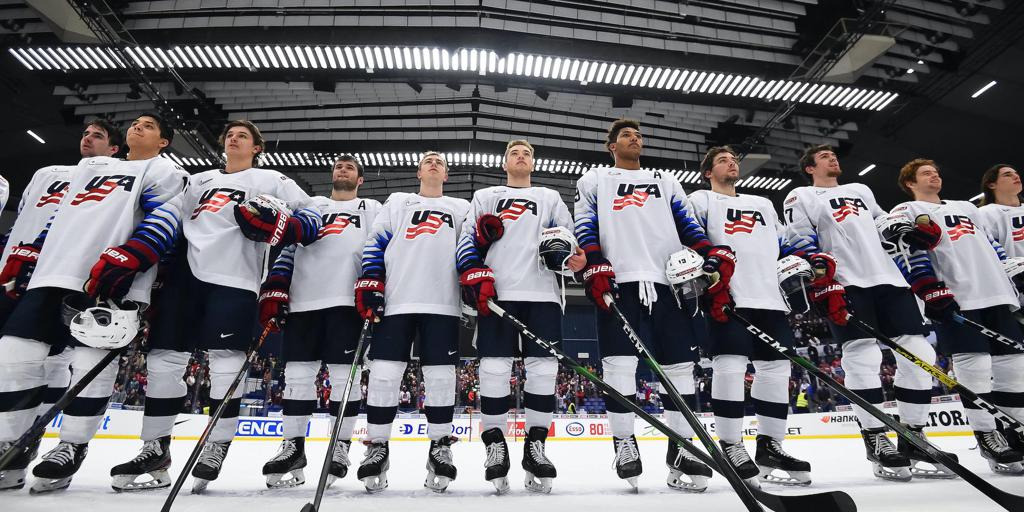 Despite not reaching a medal-round game for the first time in five years, there are many positives to take from the tournament. Arthur Kaliyev (Staten Island, N.Y.) and Nick Robertson (Northville, Mich.) tied an IIHF World Junior Championship record for fastest two goals scored by the same team, with six seconds separating their tallies against Russia. Spencer Knight (Darien, Conn.) was named the U.S. Best Player of the Game twice in his four starts. Additionally, Trevor Zegras (Bedford, N.Y.) led USA in points with nine assists, all primary, in five games. All players mentioned above were born in 2001 and are eligible to return to the 2021 IIHF World Junior Championship.

“I thought this group that we have was growing, but tonight we were chasing the game and didn’t have it,” said head coach Scott Sandelin (Hibbing, Minn.) following the quarterfinals loss. “There are some guys in there who will have a chance at this again, I hope they all learn from it moving forward.”

Team USA opened 2020 IIHF World Junior Championship play with back-to-back games against Canada and Germany, respectively. Shane Pinto (Franklin Square, N.Y.) led the U.S. offensively against Canada with two goals and an assist, including a late third period goal to tie the game at 4-4 with less than four minutes remaining. However, the Canadians would strike back and add an empty-net goal to secure the 6-4 win.

USA bounced back against Germany, 6-3, with six different goal scorers. In total, 11 players were credited with points in the win. Zegras, named U.S. Player of the Game, dished out four primary assists, including a spin pass short side to Curtis Hall (Chagrin Falls, Ohio) for the eventual game-winning goal late in the second period. Goaltender Dustin Wolf (Gilroy, Calif.) started in his first World Junior Championship game, stopping 17 of 20 shots. Wolf, born in 2001, is also eligible for next year’s World Junior Championship.

After two preliminary-round games, all five Group B teams featured 1-0-0-1 (W-OTW-OTL-L) records. Since the tournament reformatted group play in 1996, no World Junior Championship group had featured a five-way tie after two games.

The U.S. faced another set of back-to-back games to close out preliminary play. Kaliyev led the U.S. with two goals as USA defeated Russia, 3-1. Knight stopped 25 of 26 shots, leading the U.S. penalty kill to a perfect six for six in the game. Kaliyev and Robertson opened the game up in the second period, scoring six seconds apart for a 2-0 lead. USA wouldn’t look back, as Knight went on to be named U.S. Player of the Game.

Two goals. Six seconds. That was a fun way to head into the third period! #USAWJC | #WorldJuniors pic.twitter.com/stxCzjjNxO

Czech Republic came into USA’s fourth preliminary game needing a win in front of their home crowd. Germany, Czech Republic and Russia were all facing potential relegation depending on final results of the preliminary round. Zegras dished one of the most talked about assists in the tournament, a spin pass through the crease over to Jack Drury (Winnetka, Ill.) for a 3-2 lead heading into the third period. However, fueled by the sellout crowd, Czech responded late with a tying goal sending the game to overtime.

It took three minutes of extra time for Cole Caufield (Stevens Points, Wis.) to find the back of the net courtesy of a give-and-go pass with Alex Turcotte (Chicago, Ill.) to earn the win. Both Caufield and Turcotte, teammates at the University of Wisconsin, are eligible to return to next year’s tournament.

Team USA moved to Trinec, Czech Republic for its quarterfinal matchup against Finland. Despite early opportunities on the power play from both teams, the game remained a stalemate for nearly 45 minutes of play. Knight was steady in net, stopping 28 of 29 shots, but the U.S. couldn’t find the back of the net against their Finnish foes.

Knight, Pinto and Zegras were named the Top-3 Players for the U.S. following the quarterfinal game. Zegras finished T-4th in U.S. single tournament history with nine assists, and the only player in U.S. history to accomplish the feat in five games. Among players with five games at the 2020 IIHF World Junior Championship, Zegras finished second in points, behind only tournament MVP Alexis Lafreniere. The IIHF announced preliminary matchups for the 2021 IIHF World Junior Championship based on 2020 tournament results, with USA placed in Group B alongside Austria, Czech Republic, Sweden and Russia.

In total, 10 players from the 2020 U.S. National Junior Team were born in 2001, making them eligible for next year’s tournament. The quarterfinal loss will serve as a reminder to those returning, just how difficult of a tournament the World Junior Championship is. USA Hockey has begun preparations for the 2020 World Junior Summer Showcase, an annual summer event focused on player evaluation. It will be the first opportunity to witness the potential of next year’s team against fellow international competition.