The third time was most certainly a charm for Maggie Nicholson, Abbey Murphy and Makenna Webster.

That’s because Nicholson, Murphy and Webster captured their third medal in international competition when the U.S. Under-18 Women’s National Team won gold earlier this month during the 2020 IIHF Women’s Under-18 World Championship in Bratislava, Slovakia.

“Being able to lead a group that was able to win the gold medal was awesome,” said Nicholson, the team captain. “I’m really honored to have been able to play with the USA Hockey logo across my jersey for the past three years. And to have [Webster] and [Murphy] next to me through it all was really great as well. Just knowing that was our last game that we’re guaranteed playing all together was kind of sad, but it was also a really nice way to end it.”

Nicholson, Murphy and Webster closed their careers with the Under-18 national team by defeating Canada, 2-1, in overtime. It was the eighth gold medal for the U.S. in international play. The trio finished with two gold medals and a silver.

“I remember in overtime against Canada, the three of us were on the ice and it kind of hit me,” Nicholson said. “We were considered the old ones this year, but it really didn’t feel like it. It felt like we were still the three young kids on the team. But to think about all of the experiences and opportunities I’ve had alongside those two girls is something I’ll never forget.”

The trio won a gold medal in 2018 at the Under-18 women’s worlds in Dmitrov, Russia. They claimed silver in Obihiro, Japan, a year later.

“To come out on top the third time was such a great experience,” Murphy said. “I know last year we didn’t have a good end to it, but I believe in redemption. I feel like coming back, we were stronger and obviously ending up with a gold medal was an unbelievable feeling.”

Webster’s favorite medal was her first gold in Russia.

“I learned so much that year, not just as a player, but as a person and a teammate,” Webster said. “I grew so much and just the feeling of putting that first medal around my neck was a feeling that I’ll never forget.”

Nicholson’s most meaningful medal was the most recent gold. 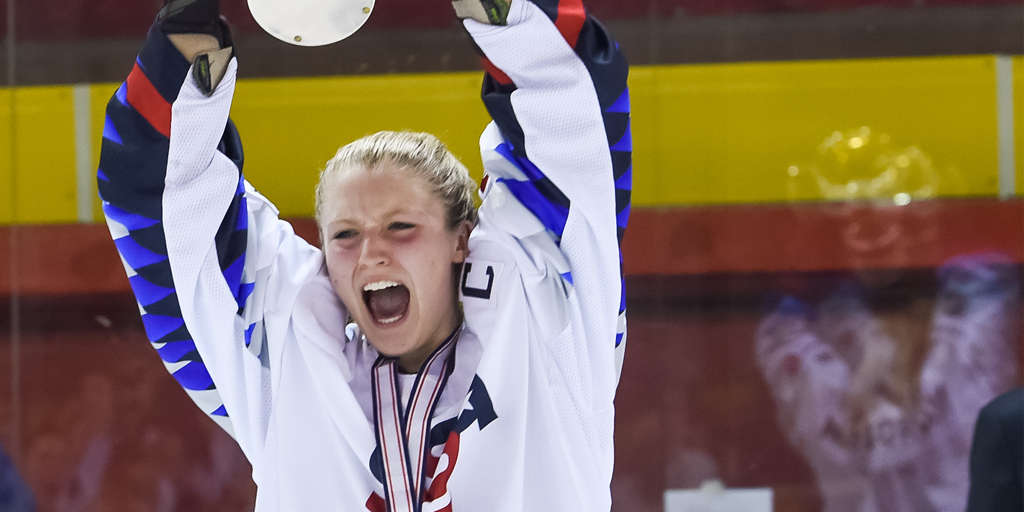 “I think it’s just a symbol of determination,” Nicholson said. “We all got together as a group and we had one goal in mind. There was a long road to get there, but we were all on the same page and we were fortunate enough to accomplish that goal.”

Webster led all U.S. players and finished second in the 2019 tournament with three goals and six points. Webster, an alternate captain this year, appreciated the experience even though the team didn’t win three gold medals. She said the team had a chip on its shoulder after claiming silver in 2019, which led to gold this year.

“I’m so honored and humbled that I was able to play in the [Under-18 Women’s World Championships] three times,” Webster said. “It was just an unbelievable experience that not many other girls get to experience, going for three years, and I’m so lucky that I was able to do so.”

Murphy played a significant role in the gold-medal game with the opening goal in the first period.

“It was a pretty good feeling,” Murphy said. “I feel like our energy was up after that, we had our plan and we were ready to go.”

Murphy is the second player in tournament history — joining Kendall Coyne — to score in three consecutive Under-18 Women’s World Championship gold-medal games. Murphy had two goals in the gold-medal win against Sweden and one in a 3-2 loss to Canada in 2019.

Murphy’s first-period goal in this year’s gold-medal game was her 10th in Under-18 Women’s World Championship play. She finished with 10 goals and 13 points in 12 games and scored in her final five tournament contests.

“It’s a total honor,” Murphy said. “My first year was definitely fun, but my last year, I will never forget that one for sure. The team we had, the girls and how we cooperated, it was unreal.”

Nicholson helped set up the golden goal in overtime. She forced a turnover at the defensive blue line and assisted during the game-winning 2-on-0.

Moments like the clinching goal could help Nicholson, Webster and Murphy in college and during future experiences with the senior national team.

“Overall, it’s a really long journey emotionally, physically and they definitely push you to become the best version of yourself,” Nicholson said. “Playing and competing alongside the top girls, not only in our country, but also in other countries is probably one of the most challenging things that I have done in my career.”

The next step for all three players is to compete in the Western Collegiate Hockey Association (WCHA) next season. Nicholson and Murphy will play at Minnesota and Webster at Wisconsin.

“I feel like we’re a trio,” Nicholson said. “The relationship I built with them is going to last a lifetime. Not only are they amazing players, but they’re even better people off the ice.”

Webster’s known Murphy for about a decade and she met Nicholson at USA Hockey camps. The trio formed an unforgettable bond during the last three years with the U18s.

“It was just an amazing experience to be able to grow up with [Murphy], to make the team with her and to hopefully keep making teams with her,” Webster said. “I’ve learned so much from [Nicholson] as the captain of the team and she taught me so much about how to be a leader. I wouldn’t want to spend the last two years with anybody else besides Abbey and Maggie because I’ve learned so much from them.”