ST. PAUL, Minn. — Surrounded by his mom, wife and three kids, Zach Parise stared up at the large video board hanging over center ice playing a video tribute.

Honoring Parise for playing in his 1,000th NHL game, highlights of Parise playing as a youth in Bloomington, Minnesota appeared on the screen. There were clips of Parise at the University of North Dakota, being drafted by the New Jersey Devils in 2003 and more from his 15-year NHL career for New Jersey and the Minnesota Wild.

Parise watched, smiling, before something hit the Wild forward. An unexpected clip of Parise’s dad, J.P., was shown and caused tears to well in Zach’s eyes.

Congratulations are in order.

“Pretty proud dad,” J.P says in the video. “He's accomplished some really good stuff and he's going to be successful in life because he understands that caring for people will only bring him success.”

Zach was honored before a Feb. 15 home game in Minnesota for reaching 1,000 games played in the NHL. He was the 51st American and eighth Minnesotan to reach the mark.

But it was the video clip of his father, who died in 2015 after a battle with lung cancer, that hit Zach emotionally.

“It was my dad,” Parise said after the game. “I wasn’t expecting that. I don’t know where they dug that one up, but that caught me off guard.”

J.P., who had his own 14-year NHL career, watched his son grow into an NHL star. He’d be further proud of Zach’s continued career.

Zach reached 1,000 games on Feb. 7 in Dallas. The Stars honored Parise during the game, even showing a picture of J.P., who played for the Minnesota North Stars, on the arena’s video board.

At the time of his milestone game, Zach and J.P ranked sixth all-time in combined NHL games among fathers and sons. Zach’s counter keeps ticking in his eighth season for Minnesota as he’s scored 21 goals, the 10th time in his career he’s reached the mark.

“Hockey in Minnesota has always been his home,” Parise’s mother, Donna, said during the video. “For him to celebrate the 1,000th game here, that’s very, very special.”

The Wild honored Parise back at home on Saturday, Feb. 15, a game that marked an even 502 games played for both New Jersey and Minnesota.

“It was awesome,” Parise said of the ceremony. “I thought they did a great job with the video and all that stuff. I’ve got to go find someone and tell them thanks because it was really special for all of us, for our family.”

“I like to call Zach the fourth-line star because the way he plays is like a fourth-line attitude,” Langenbrunner said in the tribute video in Minnesota. “It’s the way he works. His motor is relentless.” 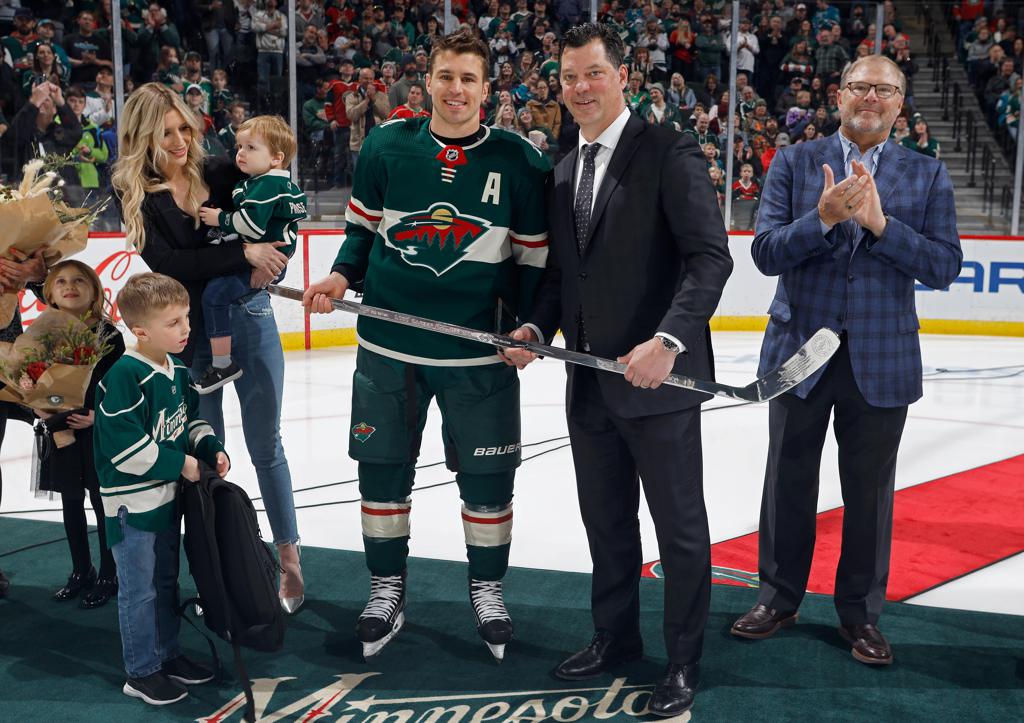 Parise poses for a photo as General Manager Bill Guerin presents him with a Silver Stick as the Parise family and owner Craig Leipold look on.

“He left nothing on the ice,” former Devils general manager Lou Lamoriello said on the video. Lamoriello drafted Parise 17th overall in 2003. “He competed each and every shift. He’s just a pure winner in everything he does.”

Parise returned home to Minnesota in 2012 in the famous dual signing with Ryan Suter, who played in his 1,000th game last season in a Wild uniform.

Parise grew up playing youth hockey for Bloomington Jefferson and played prep hockey in Faribault, Minnesota, for the standout program at Shattuck-St. Mary’s. After time with USA Hockey's National Team Development Program, Parise has represented the U.S. in several events, including twice at the Olympic Winter Games (silver medalist in 2010), three times at the IIHF Men's World Championship and twice at the IIHF World Junior Championship.

“I always said Zach’s kind of a hockey nerd,” Suter said during the video. “He eats, breathes, sleeps hockey.”

In a video posted on the Wild’s website, Parise was interviewed by Ryan Carter, another Minnesota-born NHL player. Carter played with Parise in New Jersey and Minnesota. Parise told Carter he figures he’s used a minimum of 1,000 sticks in his career and has used about 30 different curves on his sticks.

Chicken and pasta has remained Parise’s pregame staple, he told Carter, and Americanos have helped propel his career.

Part of the result is a Wild-record 67 power-play goals. He has 188 goals and 184 assists in his eight years with Minnesota.

“When I think about him, you could talk about stats and how, I think, he leads all Minnesota-born players in goals, and yada, yada,” Carter said in a video on the Wild’s website. “But really it’s about the intangibles with him; the effort, the tenacity. He truly loves the game and he’s cerebral about it. He goes to those tough areas because he knows he has to go there to be good and doesn’t shy away when maybe he could have. He’s got the excuses with the back and everything, but he shows up, he goes to work. He does his thing and he produces.”