Every time Bill Cleary got a call at night leading up to the 1960 Olympic Winter Games, he had a pretty good idea who was on the other end.

When the team was playing exhibition games to prepare for the tournament, Riley would call Cleary and beg him to join the team. Cleary, a silver medalist on the ’56 Olympic squad, was reluctant.

Bill and Bob Cleary were a heck of a hockey tandem. Bob was a member of the U.S. team that competed in the world championships the year before in Prague, Czechoslovakia. A mere couple weeks before the ’60 Games were to get underway in Squaw Valley, California, the Clearys joined the team.

The brothers from Massachusetts, both former Harvard University players, flew to Denver to meet their teammates.

“I remember we got into Denver and went into the lobby of the hotel and there are the two Clearys,” U.S. team member Dick Meredith recalled. “Some of the guys were saying, ‘Somebody here’s got to go.’ It wasn’t the best of situations, let’s put it that way.”

“It was a very cool reception to say the least, but I understood it,” Bill Cleary said. “They had all worked out at West Point and had been there the whole time. We joined the team, I think, it was two or three weeks before the Olympic Games, so I understood completely.”

Years later, coach Riley told his friend Lou Vairo — who was a scout for the U.S. for the 1980 Olympic team and was the head coach of the ’84 team — his thoughts on bringing aboard the Clearys right before the first games of the Olympics.

“Jack told me, ‘Hey, we wanted to win, and we wouldn’t have won if we didn’t do what we did. Period.’” Vairo said.

With the Clearys on board, the last piece of the puzzle was adding offensive defenseman John Mayasich. A legend at the University of Minnesota, Mayasich had to finish up his season with the Green Bay Bobcats before joining Team USA.

Then came the cuts.

“When we got John Mayasich and the two Clearys, that made our club a lot better,” U.S. goalie Jack McCartan said.

Those three hockey stars made all the difference. Predicted not to medal in the Games, the unheralded U.S. squad pulled off upset wins over Canada and the Soviet Union en route to capturing the gold in the remote, northern California town. It marked the first time in USA Hockey history that a team brought home the top prize at the Olympics.

Feb. 28 marks the 60-year anniversary of that golden day.

“Can you image, 60 years?” said Bill Cleary, who is now 85. “Where the heck does it go? I still have fond memories and I think they’re fairly vivid.”

“It feels like a million miles away, it really does,” said the 87-year-old Meredith. “It was a good run and we had a lot of fun. Everything went well.”

Yes, after the guys settled in with their new teammates, 17 members became one. It is known as one of the best U.S. hockey teams ever assembled.

“The defense we had with Mayasich and [Jack] Kirrane were probably the two best defensemen in the tournament, in my opinion,” said McCartan, 84. “Then you had [Rod] Paavola and Bob Owen were a couple of bulldogs. They weren’t big, but they were competitive guys. We only had four defensemen. Then you look up front and we had the two Christian brothers [Roger and Bill] with Tommy Williams, all three of them were great hockey players. You had the two Clearys and Bob McVey, they were great hockey players. You had Pauly Johnson, who was probably as talented as anybody playing on another line. We had good hockey players.”

McCartan is happy to spread love for all of his former teammates, but if it wasn’t for him, the U.S. probably won’t have stood atop the medal stand.

“You have to have good goaltending to win, look at the ’80 team with Jim Craig,” said Mayasich, who is 86 years old. “He won it for us. Period. The rest of the team played 120 percent each, so it was a total team effort. But Jack was the difference. That’s my estimation.”

The Minnesota product played lights out in the tournament. He logged every minute between the pipes and finished 7-0 with a .917 save percentage and a goals-against average of 2.43.

“I’ve known Jack since back at the University [of Minnesota], and I’d say that was the best I’ve ever seen him,” Meredith said. “He was the reason that we got where we got.”

McCartan might have been lucky just to get the opportunity to play in the Olympics. Riley cut him on Dec. 1, 1959, but just before New Year’s, his coach invited him back.

“I thought I belonged there, but I was just happy to get a call back because I was in the service,” said McCartan, who was in the Army and stationed at Fort Carson in Colorado.

Heading into the Olympic tournament, the U.S. had flown under the radar. No one was talking about them.

“All the writers, I think they had us finishing 12th, and there were only [nine] teams in the finals,” Cleary joked. “That’s how much they thought about our chances.

McCartan was locked in right from the start of the tournament. The U.S. upset Czechoslovakia and beat Australia by a combined score of 19-6 to win Group C to advance. 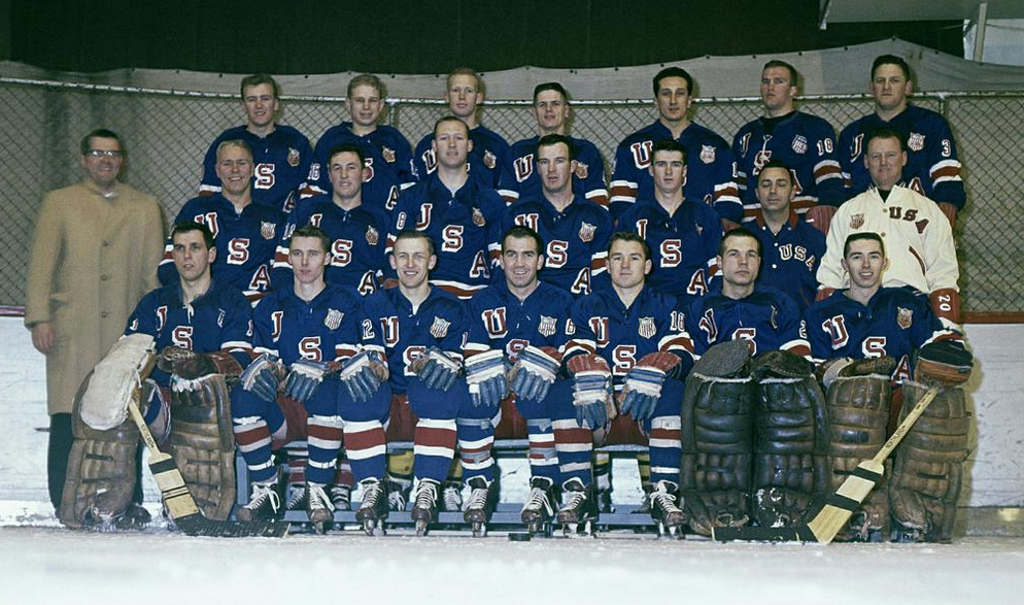 "I think when we beat the Canadians, that shook everyone up,” said Bill Cleary, who finished the tournament with a team-high 12 points [six goals, six assists]. “Everyone started to take notice.”

It didn’t get any easier for the U.S. when two days later it had to face fellow unbeaten and 1956 gold medalist, the Soviet Union.

The U.S. trailed 2-1 after one period, but the defense tightened and kept the Soviets off the board the rest of the game. Bill Christian tied the game in the second and won it with 5:01 remaining to give the U.S. a shocking 3-2 victory.

“I think the Canadian win was an indication we could end up with something here,” Mayasich said. “I think we gained confidence from that and the experience, just realizing we all could do it. Maybe teams took us lightly, that could be a factor, too — the Canadians and the Russians. Home-ice advantage was a positive thing.”

Back in ’60, the Olympics didn’t have a medal round. The winner was determined by which team had the best record at the end of the final round, which was a six-team round-robin. Sitting at 4-0, the Americans had to beat Czechoslovakia in the final contest.

The U.S.-Czechs game was scheduled for 8 a.m. According to Bill Cleary, those who set up the schedule figured the de facto gold-medal game would be played between Canada and the Soviet Union at 3 p.m. The U.S. spoiled the party.

With an early start time, the U.S. struggled out of the gate and trailed 4-3 after two periods. Knowing a victory meant gold, the U.S. players woke up in a big way. The team put up six third-period goals, led by Roger Christian with a hat trick and Bob Cleary with a pair of tallies, to win 9-4.

“An interesting part at that time was if you got a penalty, you had to serve the two minutes even if the other team scored,” Bill Cleary said. “I think they got a penalty and we got two goals. Once we got that other one to tie it up, that set us off. We just kept attacking. And the Czechs are a great hockey team, let me tell you.”

The victory capped off a great celebration by the U.S. players and coaching staff. At the medal ceremony, Kirrane, the team captain, represented his team on the highest pedestal as his teammates stood close by.

“That was really one of the great moments when I sat there and watched Jack Kirrane,” Bill Cleary said. “This tough Irishman from Brookline [Massachusetts] with the jaw sticking out, tough as nails, and he was standing up there in the No. 1 position getting the gold medal. His knees were shaking, his hands were a pool of perspiration, and I said, ‘Look, that’s what it’s all about right there. That’s what it’s about.’ That’s what it meant to all of us.”

The guys hope taking home the gold medal made a big impact on the sport in the United States.

“I think it was an achievement that maybe propelled the growth of hockey in the U.S. and maybe had a big influence on what the ’80 team did and what players grew up with,” Mayasich said.

“Winning in ’60 elevated USA Hockey and what it’s about and all their programs and all the stuff that has come from it because of some wins and some very winning teams,” Meredith said.

Vairo knows the impact firsthand of the 1960 team.

“We didn’t have that many players playing hockey in our country, and they went out and won a gold medal with very little. Most of them had to give up jobs, put their military service on hold, their education on hold, and they played with all their heart for our country. I really admire that.”