From workouts to step challenges to emails to social media, the team carries on

Sports may be on pause around the world, but the U.S. Women’s National Team continues to find ways to move forward together. Despite being scattered across the country, they are remaining connected, engaged and busy as a cohesive team, using several unique ways to continue supporting one another.

The team wasn’t able to compete in the 2020 IIHF Women’s World Championship due to the global pandemic. But team captain, Kendall Coyne Schofield, was determined to maintain a competitive schedule and continue bonding as a team in their favorite way—working out.

“We felt it was extremely important to still acknowledge the team that was going to compete in the world championships,” Coyne said. “The pandemic is challenging on everyone so we thought why not bring everyone together and do something we love. We always want to focus on getting better every single day no what the circumstances may be.”

With the guidance of the team’s assistant strength and conditioning coach, Ari Habas, every Wednesday morning they gather on a Zoom call for an hour-long bodyweight workout.

“I try to get creative with what we can do because not everyone is going to have specific equipment,” Habas shared. “I have to assume that they have nothing, so on that aspect I get creative with different isometrics and bodyweight exercises that can keep them strong and in shape.”

Although this training regimen isn’t necessarily normal, the team has tried to maintain some traditions such as the interactive warm up. If they were at an event, the team would circle up and take turns choosing what exercises they want to perform next. They toss some friendly banter back and forth while preparing their bodies for the session. This circle is now virtual, yet it still serves the purpose of joining together and getting ready to be pushed as a team.

The banter goes quiet and the energy shifts to pure focus during the actual time of instruction from Habas, and at the end they stay on the call for an extra 10 to 15-minutes to chat and catch up.

“It is so nice to have the coaching and structure from Ari during these difficult times,” added Coyne. “And ultimately to be able to grind through the workout with the team and laugh about our soreness the next day together.” 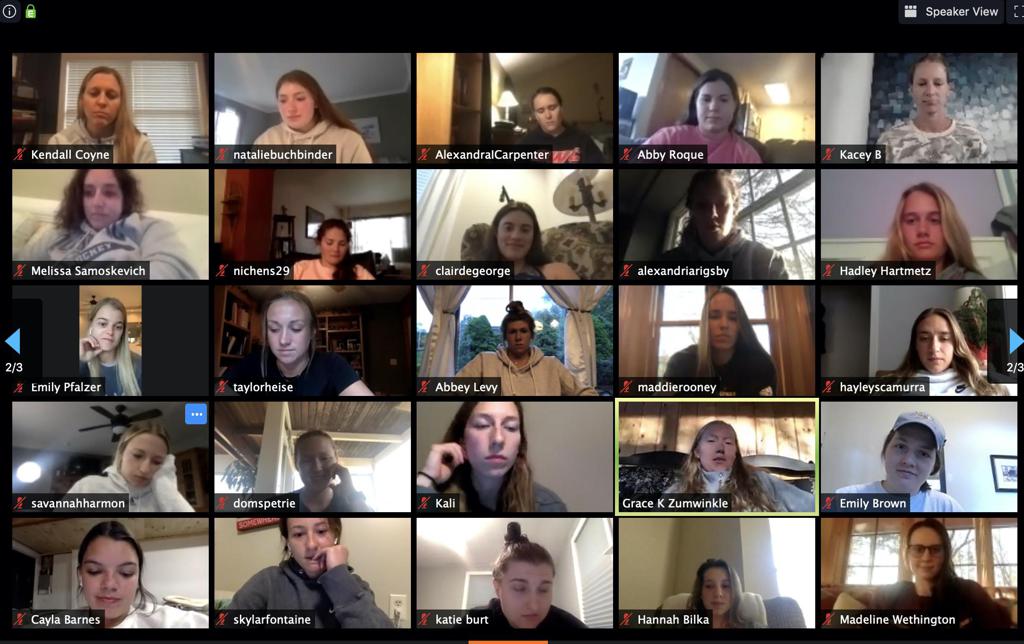 Workouts aren't the only way the team is trying to keep an edge and push for growth during this downtime. Amanda Kessel, Alex Cavallini and Hannah Brandt decided to compete in a step challenge.

“Most of our team is already obsessed with steps. It started in Florida during the leadup to the 2018 Olympics when we started taking nightly walks,” said Kessel. “So, I came up with a challenge in April as we have more time right now and it can get a little bit boring.”

The goal is to hit 12,000 steps as 10,000 seemed too easily attainable for them. They each have different devices to measure their steps, and although there’s no official leaderboard, they share their totals via text, Snapchat or even Twitter. The goal of the challenge isn’t just to get moving, but also to earn some bragging rights. At the moment, those bragging rights have consistently been won by Brandt.

“Hannah is in her own little league,” Cavallini joked.

“We’re competing for pure pride. But we get excited when someone gets that many steps,” Kessel added.

“We’re supportive of each other,” Brandt chimed in. “It’s quite the honor to be known as the step champ so I definitely take that title seriously and want to always stay at the top.”

Kessel also mentioned that she is working on another challenge for May. Keep an eye on her Twitter for the official announcement and details.

A major way the team has remained connected has been through email. Every day during the month of April, a player was designated to share an update of their activities in quarantine.

Assistant Coach Joel Johnson suggested the idea as a way to share and enjoy their experience as a “virtual” 2020 U.S. Women’s National Team.

Within this reply-all chain, there were more than simple updates included. Many shared recommendations, like books to read such as Kobe Bryant’s book, The Mamba Mentality: How I Play. Some suggested shows to binge like Netflix’s Tiger King. A few shared the latest food they’re serving up in the kitchen: anywhere from giant chocolate cookies to breakfast smoothies to Asian chicken lettuce wraps.

One thing that was also consistent among many emails were pupdates. Emily Matheson, Lee Stecklein, Brianna Decker, Aerin Frankel, Dani Cameranesi, Megan Bozek, Kelly Pannek, Cayla Barnes, Britta Curl, Hannah Brandt and Kendall Coyne Schofield shared how they’re spending time with their dog(s). From walks to hikes to couch snuggles to soaking up every minute they can get with these four-legged friends, it is absolutely certain that if quarantine could have a winner, these dogs take the title. Updates on their dogs weren’t simply told, it was usually shown to prove the pup is living their best life.

In a time of social distancing, the team continues to turn to their personal social media accounts to connect with each other and fans.

Megan Keller has kept her TikTok creativity flowing with amusing videos including one showcasing her dance moves.

For people w/ zero rhythm...nailed it. ##fyp ##foryou Comment which one we should do next..please keep in mind we suck at dancing. K thanks.

Hilary Knight keeps her followers up to date with her hikes, golf swings, gaming action and workouts on her Instagram page.

Altitude and I are in a fight.

Kacey Bellamy shares regularly on Twitter about ways to train strong and eat smart, while also reminiscing over memories playing for Team USA.

#CoreTraining is always an essential part of every workout. If you don't have access to plates, you can fill a backpack with books, sand, or rocks. pic.twitter.com/E7GXHW5CCH