A year later, Atkinson was part of a playoff experience that was not just new to the Blue Jackets, but to the entire National Hockey League.

Atkinson adjusted well to life in the bubble in Toronto, scoring eight points in eight August playoff games before Columbus was eliminated from the one-year format the league came up with in order to resume competition and complete a season while the world deals with the COVID-19 pandemic.

A former national champion and Hobey Baker Award finalist at Boston College, Atkinson has played in 571 regular-season and 35 playoff games in his NHL career. He said this year’s NHL playoff format reminded him of time with Team USA in Finland, Sweden and Denmark in the World Championships.

Atkinson was selected as one of the top three U.S. performers on the bronze medal-winning 2018 World Championship team.

He took the time to discuss with USAHockey.com what it was like to be inside one of the two bubbles the NHL used to keep players isolated and as safe as possible while proceeding with the Stanley Cup Playoffs.

USAHockey.com: Can you describe what life was like in the bubble in Toronto?

Cam Atkinson: Life in the bubble was definitely very interesting. You were pretty much secluded to your floor with your teammates, coaches and trainers.

We were staying at the Royal York, so our spot was a little bit different than the other guys who stayed in the Hotel X with a little more freedom to move around. They had a rooftop pool. They were able to go over to the soccer stadium because that was in their bubble. With ours, we had the access to see the rink and there was one little area to grab a coffee and sit upstairs.

Other than that, you were pretty much stuck inside your hotel room or in the lounge, playing ping-pong or playing cards. I facetimed my family — my two boys and my wife.

Plus, once you kind of got into your schedule, you were playing every other day. You were able to just focus on hockey, which was nice.

It probably took about a week to get used to the everyday life. A lot of guys were ordering in and having Uber Eats. It really wasn’t that bad, other than missing your family.

USAH: Having multiple games on one rink, did that take you back and remind you of youth hockey where you set up in one place waiting to play your games?

CA: Absolutely. I really liked it. The schedule was very unique.

Not only did it remind me of my youth days, but it was like a World Championships sort of feel where everyone goes to one country and everyone’s in the same hotel and you run into teammates or friends that you played with growing up, or in college or junior. It kind of had that feel to it, so it was nice.

It was different, but I’m used to it and actually like the concept better than the typical case where you go to a city, stay in a hotel and maybe fly right out. 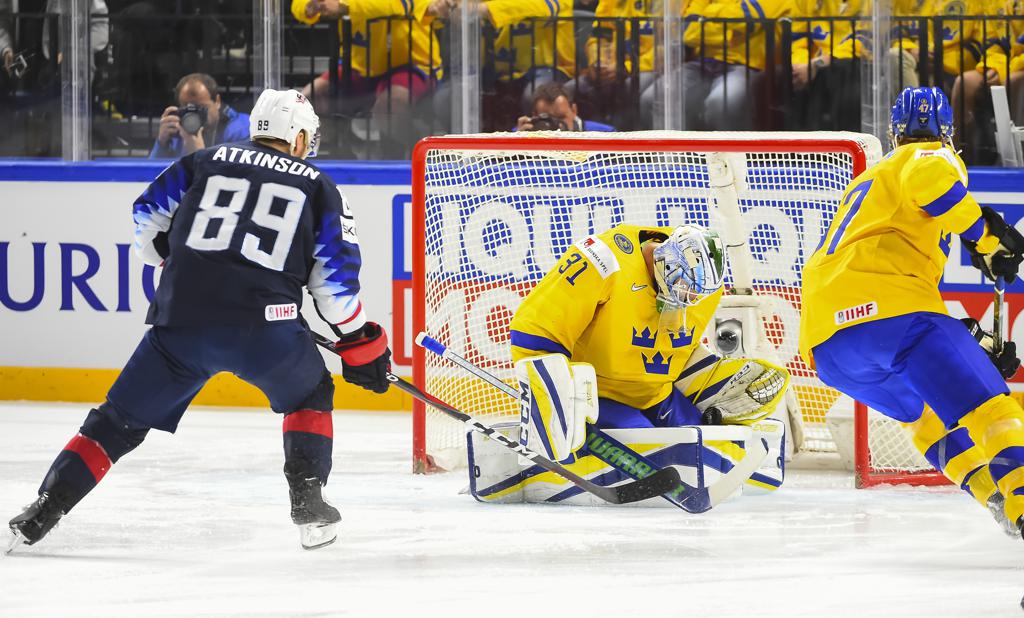 USAH: It was a tough ending and you didn’t wind up winning, but can you describe the experience of playing in a five-overtime game?

CA: That was definitely a very long game.

I actually wasn’t even really supposed to play that game because I had some bumps and bruises.

You don’t expect it to go five overtimes, which did not help my situation. Once we kind of got to the third overtime and the fourth overtime, it was funny. We were kind of laughing in the locker room because there’s really not much the coaches can say at that time. You’ve just got to go out there, use up all your energy and try to replenish by getting liquids in you and salts. The most important thing is staying hydrated in that time.

That was a tough one to lose. It would have definitely been nice to come out of the winning end. But, it was also exciting to be part of some type of history.

USAH: What is the closest experience you’ve had to that? Do you remember your previous longest games?

Those were the longest, other than the five overtimes, that I’ve been a part of.

USAH: As you go along, which is more challenging, the physical side or the mental side?

CA: That’s a great question. I want to say your adrenaline is going to the point where mentally, you’re involved.

It’s more about staying hydrated so you don’t cramp up. So, I would say probably more physically.

For the most part, everyone knows how [coach John] Tortorella is in practices and in training camp. So, we practice for situations like that.

A lot of guys after that game were either getting sick or weren’t feeling well from the lack of hydration and food in your belly.

USAH: During the time when the season was paused, what did you do to stay in game-ready shape?

CA: I’m in a very unique situation in Columbus because I own a training and hockey facility. It’s called the Battery Hockey Academy. It’s about 20 minutes from my house. It’s a 16,000-square foot warehouse that has a studio-sized rink, a gym inside and a couple of different shooting lanes.

I was able to go up there and skate three times a week to stay sharp, which definitely helped my cause going into the playoffs.

USAH: Last of all, what advice would you offer to young kids who are just getting into playing hockey or just getting back into it after this break? What can youngsters do to get the most out of hockey?

CA: I get asked that a lot by parents.

I tell parents to tell their kids to shoot as many pucks as they can in the offseason, whether it’s in your driveway, if you have a net, or if you have to go to a school and shoot against a wall. For the most part, all the kids have their sticks at home, so whether it’s a tennis ball or hockey puck, just keep your hands sharp with stickhandling and shooting.

I always tell parents and kids to play as many sports as you can growing up. Every sport works on hand-eye coordination and just working on skills that really do help with hockey skills and learning to be a good teammate.

It’s very important to be a good teammate, to be a good brother or sister. You treat people with respect. That’s one of the philosophies we have at my hockey training facility. We want good hockey players, but we want even better kids and that’s something we sort of preach on a daily basis.

Ultimately, it’s to have fun. As soon as you stop having fun, you feel like it’s a job or something.

Especially as kids, they should be having fun all the time — playing with their friends, scoring goals or making saves or that type of thing.