Even at a young age, Julie Chu knew that Meghan Duggan was a special talent.

Duggan was in high school at Massachusetts-based Cushing Academy when she joined an informal summer skate in Boston with the top college players and members of the U.S. Women’s National Team, including Chu, one of the most decorated U.S. skaters in Olympic Winter Games history.

“She was playing against college and national team members, and just there, you could see that she was talented,” said Chu, a member of four Olympic teams, two as teammates with Duggan in 2010 and 2014, and captain of the national team prior to Duggan. “I was really impressed by her skills at the time. It was really clear at that moment.”

Those informal skates were the early beginnings of an exceptional career. Duggan, who was a foundational piece of the national team for more than a decade and led the U.S. to monumental success on the international stage, announced her retirement earlier this week.

“When you look at the career Meghan Duggan had with Team USA, it’s arguably one of the greatest of all time,” said Kendall Coyne Schofield, current national team captain and teammate of Duggan at the last two Olympic Winter Games. “She led Team USA to many championships and she did it through her personality and leadership skills. She’s a dynamite teammate, friend and leader that the program is going to miss dearly.”

Duggan, a three-time Olympian, was the captain of the historic team that captured the gold medal at the 2018 Olympic Winter Games in PyeongChang, South Korea. She also captured seven gold medals in IIHF Women’s World Championship play, second-most of any player in U.S. Women’s National Team history.

Duggan is among just 12 players to have been named to three or more U.S. Olympic women’s hockey teams.

“Meghan, to me, is the ultimate competitor,” Chu said. “She really embodies everything it takes to become the best player and the best leader that she can be. She was a warrior on the ice. Every practice, it didn’t matter the drill, she went all out. The intensity that she brought was something that the rest of us fed off of.”

Duggan played 144 games for the national team from 2007-2018, totaling 43 goals, 35 assists and 78 points. She captained Team USA on 10 different occasions, including twice at the Olympics, three times at the IIHF Women’s World Championship and five times at the Four Nations Cup. 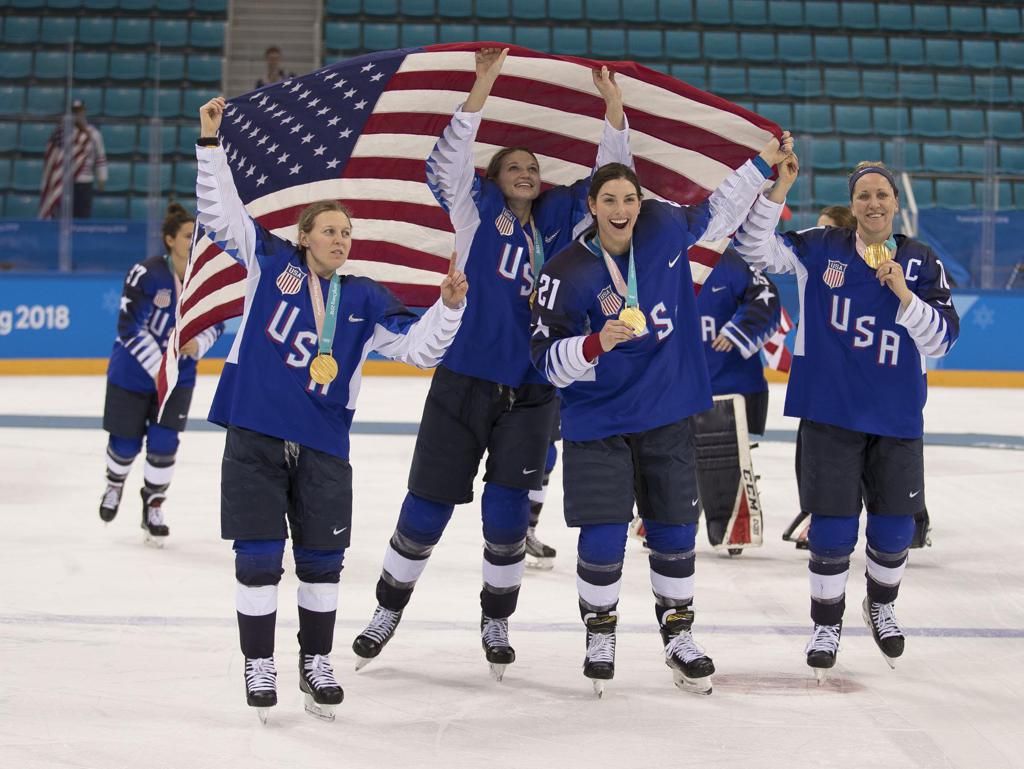 Duggan captained Team USA to gold at the 2018 Winter Olympics.

Duggan also enjoyed an impressive career at the University of Wisconsin where she led the Badgers to three national championships, in addition to a runner-up effort. Duggan, who finished her college career with 108 goals and 238 points in 159 games, won the Patty Kazmaier Memorial Award as the top player in NCAA Division I women’s hockey, in addition to USA Hockey’s Bob Allen Women’s Player of the Year Award in 2011, her senior year.

Duggan also played six seasons of professional hockey, including four with the Boston Blades, where she helped her team to a Clarkson Cup championship in 2013 and 2015.

“She wanted to win,” Chu said. “And to have that mentality is why she’s been a winner at so many levels of her career. As teammates, we always knew what we were going to get from her and that was complete commitment. She was a great example of how to be fully committed and fully all-in to whatever she put her mind to.”

Duggan ended her career on top, as her final game with the U.S. came when she won the gold medal at the 2018 Olympic Winter Games. She recently took time away from the ice to start a family with her wife, former Canada standout Gillian Apps. They welcomed George Robert Apps-Duggan on Feb. 29, 2020.

“The amount of kids she impacted to want to play the game of hockey is significant,” Coyne Schofield said. “She is leaving the game better than when she entered. While we’re all sad to see Meghan leave the game as a player, we know that her mark on this game will last forever.”