Perseverance through some early struggles helped Hellebuyck forge his own path

Winnipeg Jets star Connor Hellebuyck allowed his challenges at a young age to propel him into becoming one of the best goaltenders in the world.

Hellebuyck, a native of Commerce, Michigan, rose from the North American Hockey League (NAHL), one of the top junior hockey leagues in the United States, in 2011-12 to the top of the National Hockey League (NHL) after he won the Vezina Trophy as the best goalie in the league in September.

“On the road to perfection, you have to fail,” Hellebuyck said. “It’s so hard to see in the moment that you have to fail in order to learn what perfection really is. My biggest improvements have come after I failed.”

USA Hockey’s American Development Model has long preached the benefits of not rushing development, and focusing on the core concepts of human development through hockey. Many hockey parents recognize terms like “small area games” or “age-appropriate development,” but the core concept is to ensure all athletes, from the beginning of playing hockey until the end of their hockey careers, have the opportunity to have fun and acquire skills at appropriate ages.

This is even more true with a position like goaltending.

“USA Hockey continues to make large strides in teaching coaches, players and parents the best way to develop as a goaltender,” ADM goaltending manager Steve Thompson said. “Connor is the perfect example of how important playing at a level that allows you to play on the ice, and not watch from the bench, is to the development of a goaltender.”

In all seven professional seasons between the Jets and Manitoba Moose (AHL), Hellebuyck has played 50 games or more. Throughout his college career, Hellebuyck was the featured starter at the University of Massachusetts-Lowell. And prior to college, between junior hockey and high school, he was well-prepared in net after being featured as the starter.

“The ADM prioritizes playing hockey in order to develop. We want to ensure that no youth hockey teams have back up goalies,” added Thompson. “If you’re an athlete thinking about the next level, we want you to thrive and not just survive. Connor’s “failures” in his transition to junior hockey were actually opportunities for him to stay back at a level that he had a lot of success at which was the best situation for his personal development, and it has allowed him to become the goaltender he is today.”

Hellebuyck wasn’t scouted coming out of high school at Walled Lake Northern, based out of Commerce Township, so he played in the Michigan Development Hockey League (MDHL).

“That’s where I got a scout’s attention,” Hellebuyck said.

But the move didn’t get Hellebuyck drafted to the United States Hockey League, the top junior hockey league in the country sanctioned by USA Hockey, or the NAHL either.

“That hurt because I thought one of them would’ve happened,” Hellebuyck said. “I thought the USHL might happen, and if it didn’t, I thought the NAHL might fall into play, but neither did. I had my moment of despair and then I got back to work.”

That earned Hellebuyck a tryout with the NAHL’s Texas-based Odessa Jackalopes.

“I said, I’m going to make this work no matter what happens,” Hellebuyck said. “That became my full-on goal. My Plan A, Plan B and Plan C was to make the team from that camp. That was my goal, I got to work, and the rest, kind of, is history.”

That’s where Hellebuyck credits his work ethic. Those setbacks set him up for the recipe needed to find success, while playing two seasons of Division I college hockey at the University of Massachusetts Lowell, within the American Hockey League at St. John’s and Manitoba, and then the NHL level with the Jets.

“If I would’ve had success, I probably would’ve kept doing what I was doing,” Hellebuyck said. “With a little bit of failure, you learn what you’re doing wrong, and you learn how to correct it. I had a ton of drive, but not only that, I was having a lot of fun.” 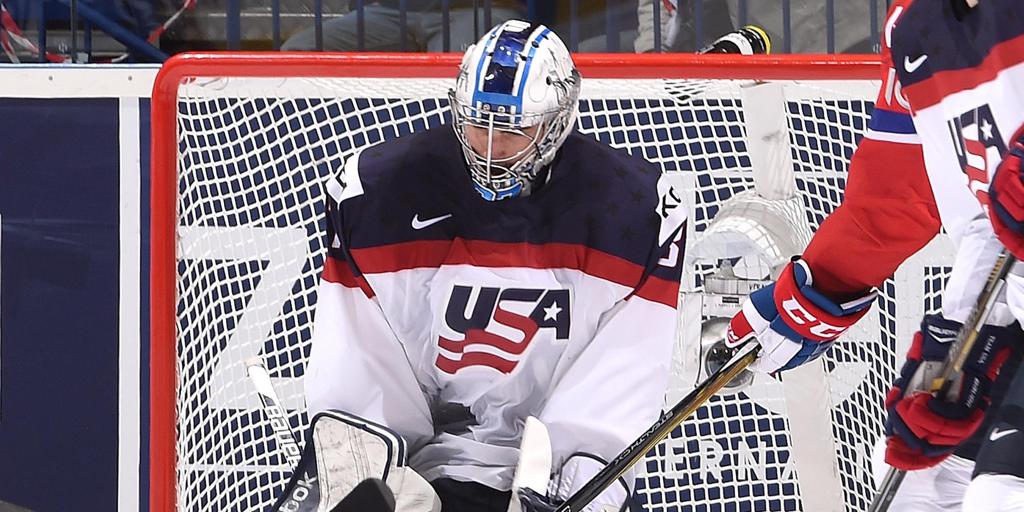 Hellebuyck also found himself in an advantageous situation at Odessa, which set him up for success in the NAHL and beyond.

“I was very fortunate that my NAHL team came from the [Central Hockey League], so they operated in a professional way,” Hellebuyck said. “They had a really good staff around them and a really good owner who really cared about the players, team and winning.”

Away from home for the first time, fortunately with a supportive billet family, he was able solely focus on hockey during his NAHL days. Odessa’s former general manager Joe Clark was also the team’s goalie coach. Hellebuyck still keeps in contact with him to this day.

“He really helped shape hockey for me, he helped me with my mental game, my work habits, how to improve and just going over video,” Hellebuyck said. “My game just took astronomical leaps and bounds there.”

Hellebuyck’s game took off in the NAHL, where he was named the league’s Co-Rookie and Co-Goaltender of the Year. But Hellebuyck still credits Randy Wilson, one of his previous coaches from his high school days.

“I’ve been working with him ever since,” Hellebuyck said. “It’s a summer thing, but being able to have him as my goalie coach in the summer, and then to go to my team, and really start breaking things down … they just feed into one another.”

Those habits developed in high school at the junior level and in the NAHL have helped shape Hellebuyck into the goaltender that he is today.

“It’s everything for me,” Hellebuyck said. “It’s how I made my career, and it’s how I’m going to continue my career. I have the right people around me, who believe in me and will do whatever they can to make me better and help me succeed. When you have people around you like that, it’s almost hard to fail because I always have somebody to lean on.”

“It was on my bucket list and that’s what I set out to do,” Hellebuyck said. “It means a lot to me and it meant a lot for me. I was willing to do whatever it took to put this in as one of my milestones and I’m very happy that I was able to win it.”