One year later, Abbey Murphy admits she still continually reflects on the gold medal she helped the U.S. Under-18 Women’s National Team capture during the 2020 IIHF Under-18 Women’s World Championship in Bratislava, Slovakia.

“Honestly, I look back at it all the time,” Murphy said. “I go on my camera roll and look back at the memories and friendships that I made. It was truly special and every time I look back on it, I think of it as a great opportunity that we had. We were very lucky and I’m grateful for it.”

Teammates Kiara Zanon and Mia Biotti can attest, as the group helped the U.S. capture a fifth gold medal in six years. It was the eighth gold medal for the U.S. Under-18 Women’s National Team in international play and 13th consecutive medal overall.

Zanon played a significant role in the deciding contest, as she tallied the game-winning goal in the team’s 2-1 overtime win against Canada to clinch the gold medal. She found the back of the net during a 2-on-0 rush with Maggie Nicholson for the winner. Zanon also vividly remembers the celebration after her golden goal.

“There was a huge dogpile,” Zanon said. “I was on the bottom and I couldn’t breathe. But honestly, watching it back, watching everyone pile on top and being able to stand on the blue line and sing the national anthem with everyone’s arm around each other … to be able to scream it at the top of our lungs was probably the most special.”

Biotti’s favorite memory was also the clincher against Canada, along with the championship celebration and the special connection she still shares with her teammates one year later.

“The gold-medal game,” Biotti said. “And celebrating afterward, and just everyone skating around the ice, carrying the flag with our medals, standing on the blue line and singing the national anthem, and then going back to the hotel and celebrating with all of our parents … I would say that’s definitely a vivid memory. Those are moments I remember and like to relive.”

The group dispersed into different parts of the country, but they remain tight one year later. Murphy and Zanon are freshmen at the University of Minnesota, and Penn State University, respectively, while Biotti is committed to Harvard for the 2021-22 season. 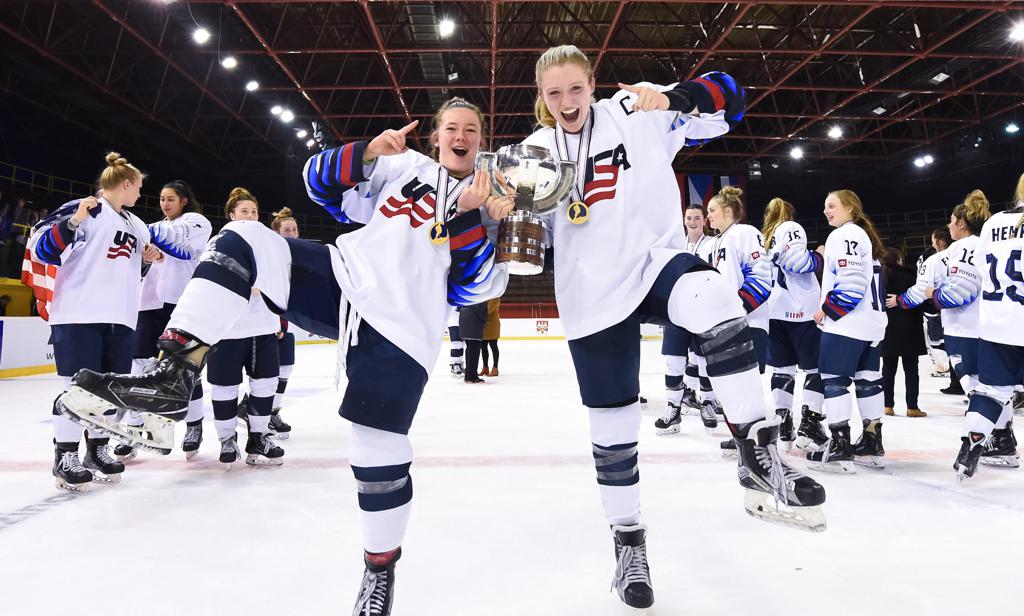 Members of the team have enjoyed connection through social media and text message groups. It has been a different connection for Zanon, who is sharing a room at Penn State with Lyndie Lobdell, a defender on the gold-medal winning team.

“We actually have a huge canvas of us holding the trophy on our wall,” Zanon said. “We both have a similar mindset because we’ve been there. We know what it takes and we can carry that into college, so having someone with the same goals and aspirations, and being able to talk about it, and reflect, is special.”

Murphy captured her third medal in international competition when the U.S. claimed gold. She won a gold medal in 2018 at the IIHF Under-18 Women’s World Championship in Dmitrov, Russia, and claimed silver in Obihiro, Japan, a year later before winning gold again in 2020.

Murphy played a significant role in the most recent gold-medal game with the opening goal in the first period. She’s the second player in tournament history — joining Kendall Coyne — to score in three consecutive Under-18 Women’s World Championship gold-medal games. Murphy had two goals in the gold-medal win against Sweden and one in a 3-2 loss to Canada in 2019. She finished with 10 goals and 13 points in 12 games and scored in her final five tournament contests.

“Every time I [played in a tournament] it changed me,” Murphy said. “It made me a better person and a better player. The coaches and staff, they just teach us a lot … not only on the ice, but off the ice, so I think being there, and doing the team bonding, it changes you and I came home a different person.”

The group undoubtedly grew as players and individuals, gaining confidence from excelling at the international level and defeating some of the best in the world at their age group.

One year later, they still and will always remain champions.

“Those are some of the best experiences, but they’re not easy,” Zanon said. “There are many obstacles you have to go through, whether it’s the process of making the team or even being on the team, and I think I learned so much from everyone around me. I carry everything I learned with me today. It impacted me in more ways than I can ever explain.”