Memories extend beyond gold medals to their impact on the sport

Monique Lamoureux-Morando and twin sister Jocelyne Lamoureux-Davidson both played an integral role in helping Team USA to a historic and exhilarating gold medal at the 2018 Olympic Winter Games in PyeongChang, South Korea.

Now, they’re calling it a career.

The Lamoureux twins, who were mainstays on the U.S. Women’s National Team for more than a decade and helped lead the U.S. to unprecedented success on the international stage, announced their retirement this week.

“They’ve been true leaders off the ice,” said Meghan Duggan, the captain of that 2018 gold medal-winning team. “They’re two players that if anyone asked me who in your career would you want to go to battle with tomorrow, they would both be at the top of that list. Their compete level, their work ethic, focus and determination is unmatched.”

In 2018, the Lamoureux twins helped lead Team USA to its first Olympic gold medal in 20 years. Both sisters played a vital role in the gold-medal victory against Canada, as Monique netted the game-tying goal in the third period, and Jocelyne scored the winning goal in the shootout.

Duggan isn’t surprised that the twins came through when their teammates needed them most. 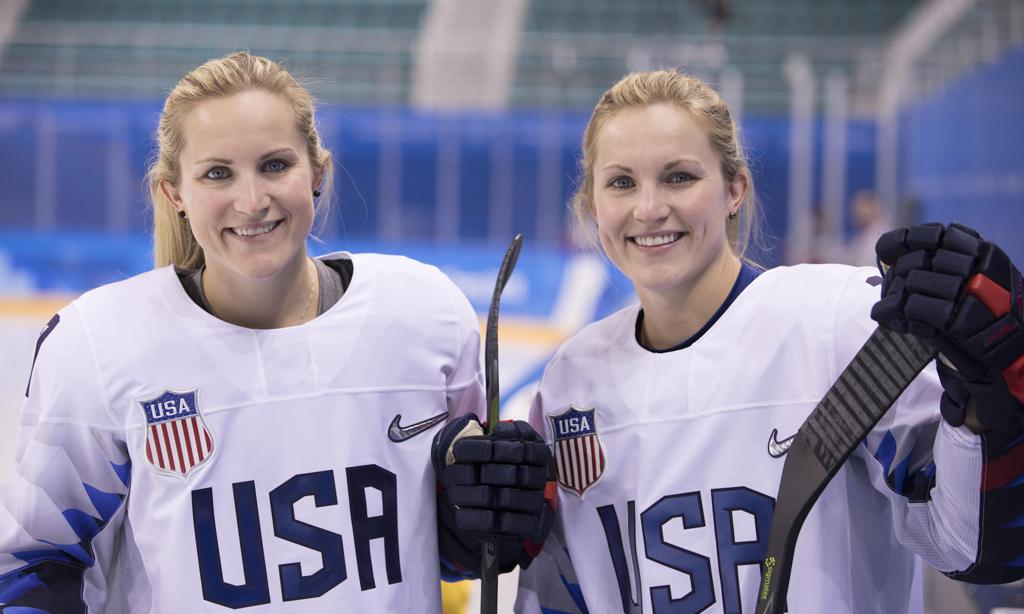 The twins at the 2018 Olympic Winter Games.

“They were made for those moments and they proved it,” Duggan said. “They’re game-changers, and they score those types of goals because of their preparation and attention to detail. That’s what I love most about them.”

The Lamoureux sisters grew up in Grand Forks, North Dakota, with their four brothers. Their father Jean-Pierre was a championship-winning goaltender at North Dakota and their mother Linda was a swimmer and marathon runner.

The Lamoureux sisters were the first ones on the ice when Stafford coached his first-ever girls hockey practice at Shattuck-St. Mary’s. He described the Lamoureux sisters as one-of-a-kind when they burst onto the scene, and noted that Jocelyne occasionally played goal during some practices, which created a unique dilemma at the national tournament one year when their regular goaltender suffered an injury.

“I saw them skate, pass and shoot, and I saw their work ethic and grit,” Stafford said. “They set a standard in that very first practice to which the [Shattuck-St. Mary’s] program aspires today. They are the same humble, generous kids they were from the start, but they also have a strong sense of right and wrong, and how things are supposed to be done the right way, whether it’s how you train and play, or how you treat people.”

“Like everyone who knows them, I am just so proud of both of them,” Stafford said. “They have represented themselves, their families and any organization whose jersey they have worn with the utmost class, respect and integrity. They will be missed and their absence will leave a void on the national team that will be very hard to fill, the physical presence and the aura, but also the team cohesion and identity.”

Peter Elander was an associate head coach at the University of North Dakota when the Lamoureux sisters starred in their hometown of Grand Forks.

Elander also indirectly played an important role in Team USA’s 2018 Olympic victory, as he initially introduced Jocelyne to the famed shootout move used to clinch the gold medal. The move was named “Oops, I Did It Again,” the title of Britney Spears’ 2000s megahit because it focused on weight transfer and smooth puck transitions.

As Elander recalled, Jocelyne needed years of time to perfect one of the most significant goals in women’s hockey history.

“Things and moves they could not do, they mastered after two, or sometimes three years of practice,” Elander said. “Jocelyne’s famous Olympic gold medal penalty shot, the ‘Oops, I Did It Again,’ took years of development and another year to master it in the most pressuring moment there is.”

Elander first saw the Lamoureux sisters on the ice when they were 18 years old and recalled that they were raw, tough, scrappy players with a high compete level, but their technique needed improvement.

Their work ethic changed that.

“Their ability and love for working on things they didn’t master is the reason for their success,” Elander said. “I’m extremely proud of their achievements and I’m very grateful as a coach to have had the true pleasure of working with two athletes who constantly pushed themselves and others to be better. They strived for world class in their sport, they listened and learned, and whatever drill you threw at them, they always responded with a, ‘Yes, let’s work on that,’ and never took the easy solution.” 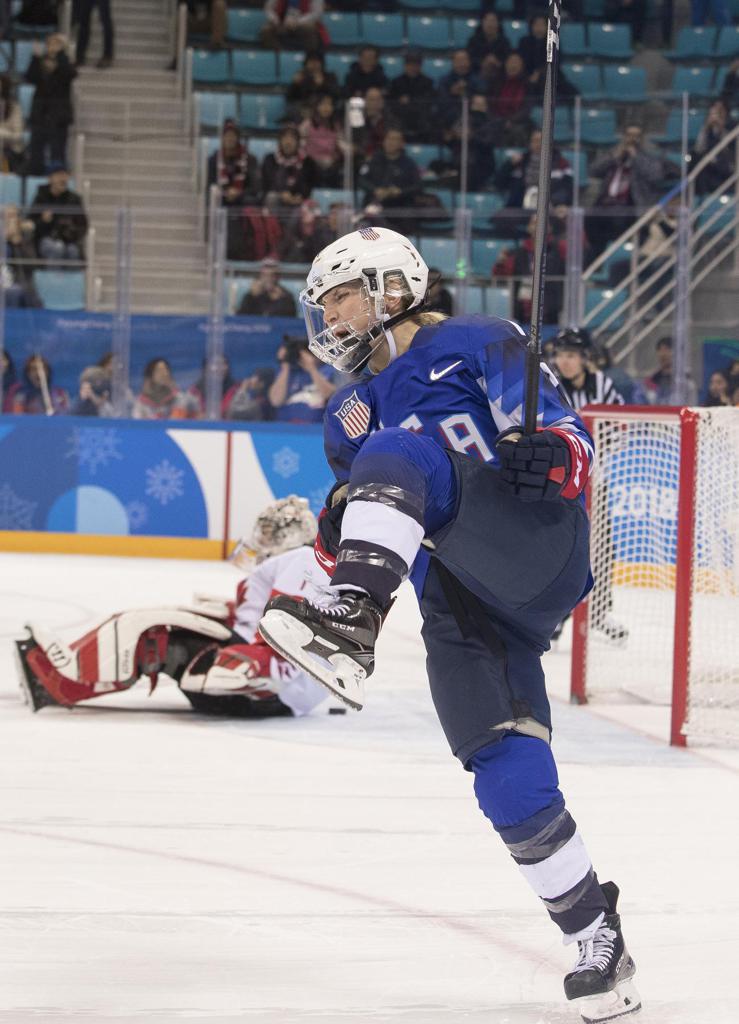 Jocelyne scored the game-winning goal in the shootout of the 2018 gold-medal game.

“I have a lot of great stories, but one thing that comes to mind is their toughness and ability to play the game for the team that needed them,” Elander said. “Also the way they challenged each other to be better, and not always with a soft, nice tone, was astonishing to be around.”

Elander detailed a North Dakota game against Ohio State where Monique and Jocelyne came in on a 2-on-0 situation. One of the sisters missed a pass, and the conversation on the bench between the two was “harsh,” according to Elander. 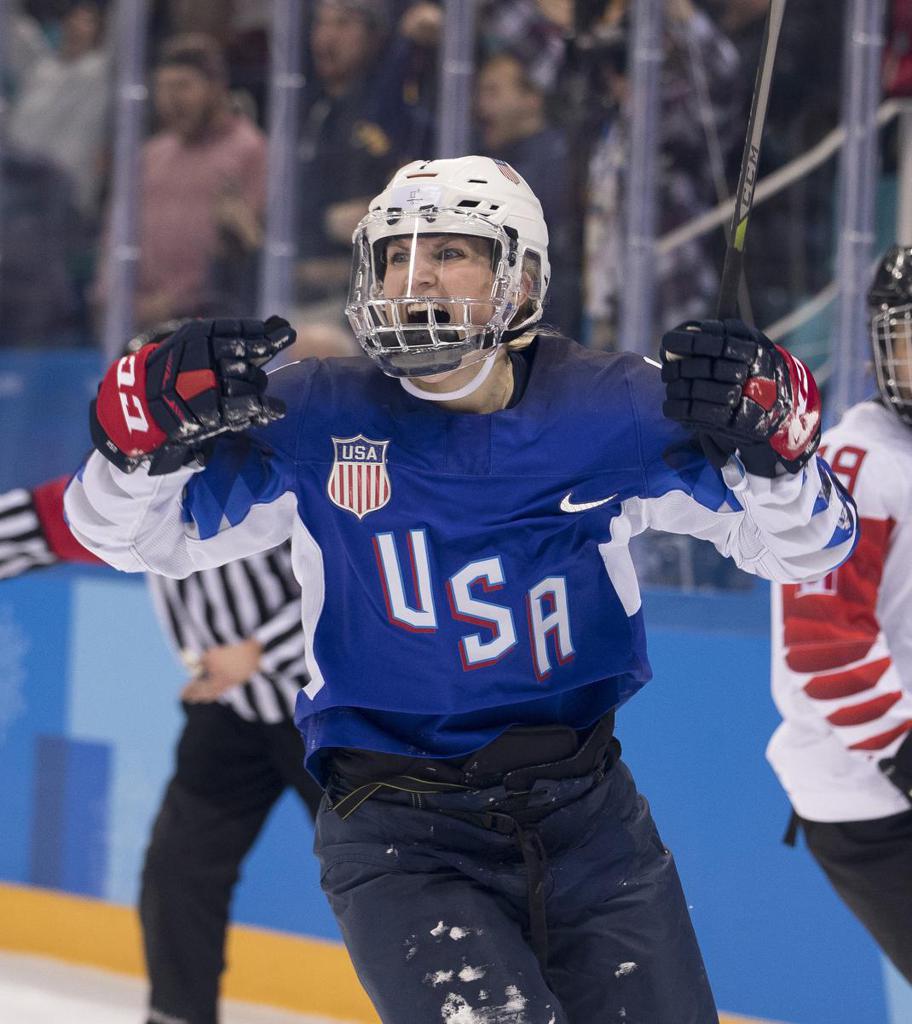 Monique scored the tying goal to send the 2018 gold-medal game to overtime.

“They were saying to, ‘Make a better pass next time,’ or, ‘You should’ve been ready for it,’ or, ‘You better work on your passing,’” Elander said. “The rant went on for a minute with anger until the next shift when they scored. We still haven’t figured out if the mistake was on the pass or the receiving end.”

“Their impact on the game is obvious, but I think their impact on women’s athletes, specifically in team sports, is even greater.”

Nashville Predators forward Rocco Grimaldi played college hockey at North Dakota where he also watched the twins play. The past several years, Grimaldi has trained with the Lamoureux sisters and Monique’s husband, Anthony.

“The girls have had such amazing careers and they’ve inspired many people along the way,” Grimaldi said. “They are two of the hardest-working people that I know. Yes, they have more talent than most, but they still outwork everyone around them. It’s great to be able to train with people like that because you can push each other to be better every single day. They know what they want in life and they are willing to put in the work necessary to try and achieve that goal.”

The Lamoureux sisters had a significant impact on Duggan as a player, a person and a leader on the U.S. Women’s National Team.

“They showed up every training camp, every meeting and every practice,” Duggan said. “They held me accountable and made me want to continue to push myself and be better every time I showed up at a new training camp or practice. I can’t stress enough their commitment, dedication, work ethic and preparation. It’s world-class and that’s why they’re world-class athletes.”

That was evident after Monique and Jocelyne attended the annual USA Hockey Women’s National Festival in Lake Placid, New York, less than eight months after giving birth to their sons. Lamoureux-Morando and her husband Anthony welcomed their son Mickey in December 2018. One month later, Lamoureux-Davidson and her husband Brent announced the birth of their son, Nelson.

“They’re two players I admire so much in the way they conduct themselves and the way they prepare and commit,” Duggan said. “They’ve challenged me in so many ways over the years to continually grow and push myself because they continually set the bar and standard so high.”

In 2019, the twins launched a foundation to help disadvantaged and underprivileged children, primarily through education in their home state of North Dakota. In the past, they traveled the country, putting on hockey camps, while promoting gender equality and internet access for low-income families.

Grimaldi is sad to see the Lamoureux sisters retire, because they will be missed in the hockey world, but he feels this is only the beginning.

“I believe their work is just getting started,” Grimaldi said. “They will have more time to be able to share their experiences with young kids and show them what it takes to get to the top of their sport, and more importantly, how to be a good person and remain humble even at the top. They are wives, moms and mentors for their families and families around the country. Whatever they set their minds to will be a success.”

Duggan, who announced her retirement in October, is excited to see what’s next for the Lamoureux sisters after retirement.

“They’re both making this decision right now because it feels right to them for a million different reasons,” Duggan said. “It’s a wonderful decision and I’m so excited for them because they’ve had a fantastic career. What they’ve done for our team, on and off the ice, it’s historic and it has been game-changing on so many levels. They deserve to be celebrated because they’ve changed the sport of hockey.”