A 14-year career in professional hockey is special. Playing all 14 years with the same organization? Even more special, especially in this day and age. But that’s what Jimmy Howard did. The goaltender recently announced his retirement from the NHL.

The upstate N.Y. native, who now calls his family “Michiganders,” spent the entirety of his career in the Detroit Red Wings organization, collecting a Stanley Cup ring in 2008. Howard played at USA Hockey’s National Team Development Program during the 2001-02 season while also representing Team USA at the 2014 Winter Olympic Games, the 2012 and 2017 IIHF Men’s World Championships and the 2003 IIHF World Junior Championship.

A father of four, Howard spent some time with USA Hockey to talk about his career, his favorite hockey memories and his plans now that his playing career is over.

USA Hockey: Congratulations on a great career. When you look back, what are some memories that stick out the most to you?

Jimmy Howard: Starting with the first memory of getting drafted back in 2003, I was very surprised to be picked by Detroit. I only had about a 10-minute meeting with them, so they weren’t really on my radar. When they called my name out in the second round on the first day, it was a shock and a thrill at the same time to be picked by such a storied franchise, being an Original Six team and all of the history that goes with the Red Wings. It was a lot of emotions for myself and my family.

Another memory that sticks out is my first game back in 2005 playing against the LA Kings at the Staples Center and winning 4-2. It was very special to me to be able to put on the Red Wings jersey for the first time and play in a game. But also to play with guys that I idolized growing up. Steve Yzerman was on the team, Brendan Shanahan, Chris Chelios, Niklas Lidstrom, Pavel Datsyuk, Henrik Zetterberg. The list goes on and on that I sort of had to pinch myself in the first period that I was playing with these guys after watching them for so long. 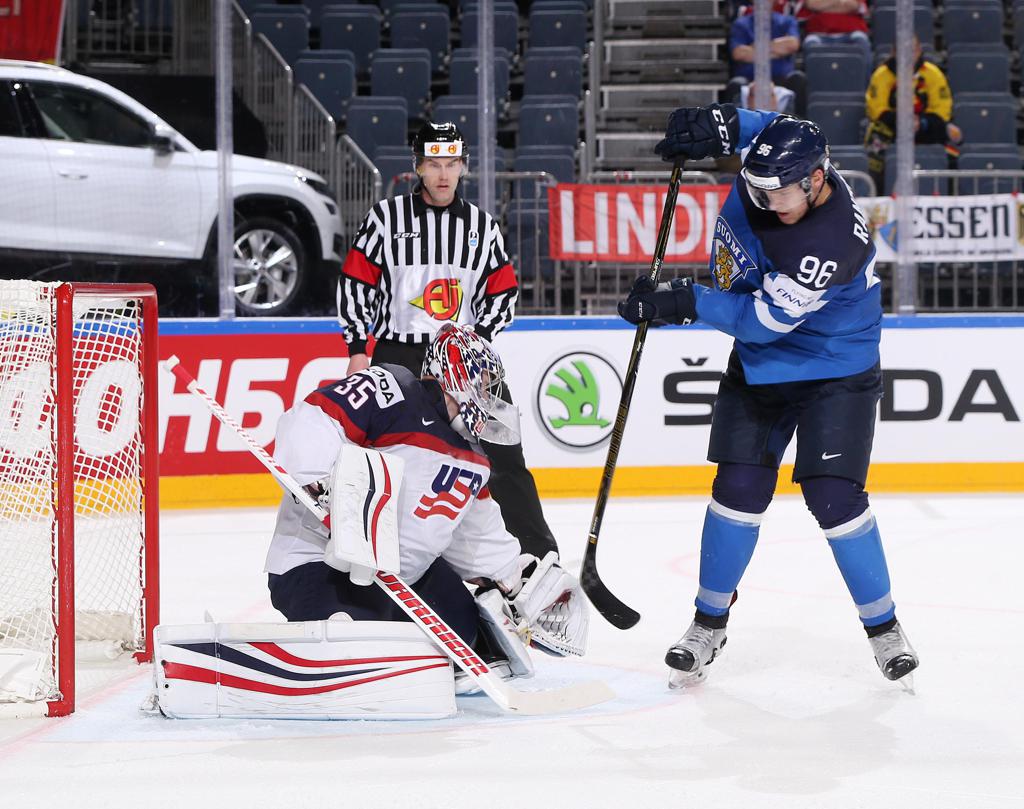 USAH: What was some of the advice those guys gave you?

JH: A lot of those guys just said enjoy it because it goes by really fast and boy does it. I mean I blinked and I’ve got four kids and I played in the league for 14 years and I think, ‘Where did the time go?’ They said enjoy every single day because it goes by fast. I also just tried to watch their lead because there were so many good influences in that dressing room. Chris Osgood was probably the most influential Red Wing teammate slash really good friend. We’ve remained good friends to this day. Just live in the moment, when the game is over it’s over and there’s nothing we can do about it. He helped me out a lot just by watching him over the course of three to four years.

USAH: How special was it for you to spend your entire career with the Red Wings organization?

JH: It’s such an honor to be able to play for just one organization. The city of Detroit has embraced my family and me, and now we’re Michiganders. There’s a lot of movement now within the league and guys not staying too long in one spot. I was so fortunate to be able to be in one spot for my whole career and not have to constantly figure out moving trucks and stuff with my wife and moving all around North America.

Thank you for always repping the Red, White & Blue with pride.

USAH: Who were some of the biggest influences on you throughout your life and career?

JH: My parents had the biggest impact on my career. Without them when I was growing up, being selfless and driving me all over northern New York and southern Ontario, I wouldn’t be in the position I’m in today, being able to call it quits on my terms after a 14-year pro hockey career. My parents, hands down, were the most influential for me being where I am today.

USAH: What did it mean for you to represent Team USA and the red, white and blue?

JH: It meant the world. To be able to put on your nation’s colors was one of the big factors why I chose to go to USA Hockey’s National Team Development Program. To just be able to put on the red, white and blue every single day, it’s just very special. I think any athlete would tell you when they get to put on their nation’s colors, there’s just something about it, it’s just such a unique situation. Not everyone gets the opportunity to do that. To be able to go to the NTDP, to play in World Juniors and World Championships, to be on the team in Sochi for the 2014 Winter Olympics, those are all very special moments for me looking back on my career.

USAH: What excites you the most about the state of hockey in the United States?

JH: That it’s growing everywhere. Back when I was younger, it seemed like it was Minnesota, Massachusetts and Michigan. Now you have kids from all over the country that are making it to the NHL and growing the sport. That’s what I think is the most exciting part about USA Hockey. It doesn’t matter where you live, you can still make it to the NHL.

USAH: Why did you choose to be a goalie, and what advice would you have for young goaltenders today?

JH: I was a rink rat growing up. My dad was the high school hockey coach in upstate New York for the first five or six years of my life. I used to just always love being around the dressing room. When I was in the dressing room, I was just always drawn to the goalie stuff. It was just so unique, it had the team colors on it, and then painted masks were just starting to come out and were really cool to me. I remember my first year of 10U, I said I wanted to play net. My dad always thought it would be a phase, but he’s thankful now it wasn’t.

As far as advice, I think the biggest thing is you have to be a good skater. The old song and dance of putting a kid in net that can’t skate, once you put the equipment on, it’s even harder to skate. The good goalies out there are good skaters before they put the pads on. If you enjoy being a goalie, just have fun with it. That’s what I always did up until the last day.

USAH: Now that your playing career is done, what are your plans?

JH: I don’t have any aspirations of coaching in the NHL, but right now I really enjoy spending time with my kids at the youth level. My two older boys play hockey here in Detroit for the Oakland Junior Grizzlies. I am the head coach for the 2011 team here and I am the assistant for my other son’s team. I really enjoy coaching my kids. I’m just taking everything in stride now. I’m trying to be a family guy, right now I pretty much just chauffeur the kids around with a driver’s hat. As far as what’s on the horizon for me? I’m not too sure, I’m just enjoying family time here since everything just came to an end.