Head coach David Hoff and members of the U.S. National Sled Team didn’t hesitate when offered the chance recently to help the Warrior For Life Fund (WFLF) Sled Hockey Program, an upstart sled hockey organization based in the Hampton Roads region of Virginia.

Hoff was joined by national team players Joseph Woodke and Travis Dodson as the group participated in an annual memorial game at the Iceland Family Skating Center in Virginia Beach.

The charity game also featured NHL players from the Boston Bruins, including Kevan Miller, in addition to members of the military community. The game benefitted the WFLF, a non-profit, which is dedicated to supporting active duty, retired veterans and their families as they transition through unique challenges of combat service. 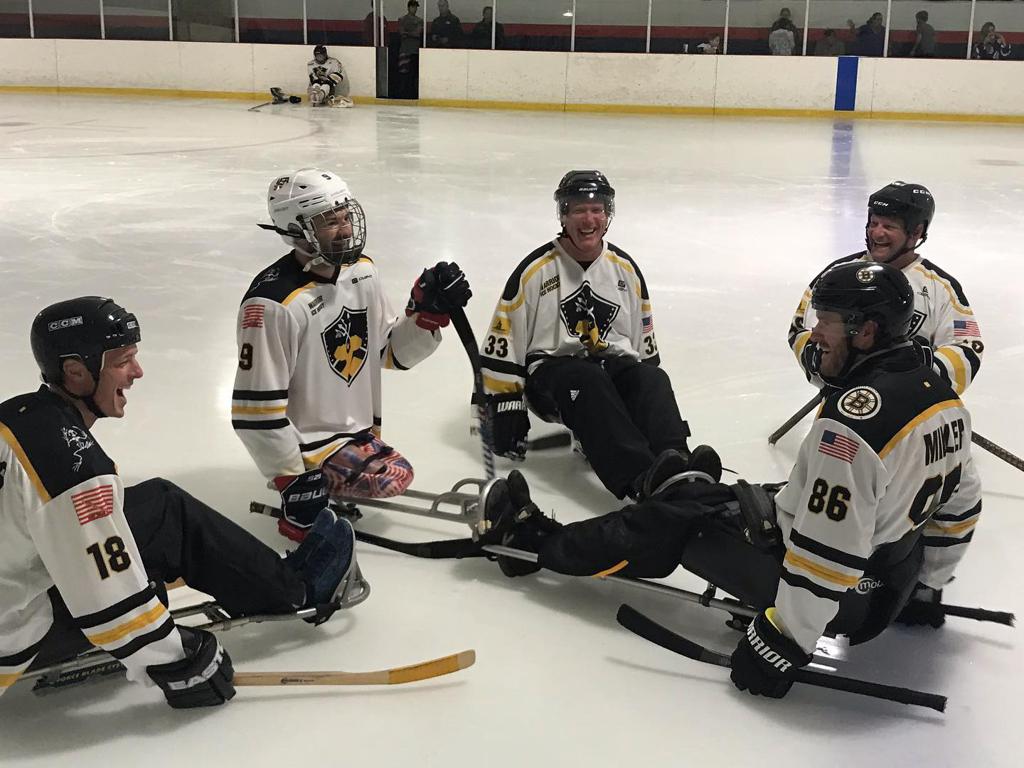 “It was cool for me to go out there, but I wanted to get a couple players, especially a couple of our military guys to connect with them,” Hoff said. “I reached out to Travis Dodson and Joe Woodke, and asked if they’d be willing to come out, and they both jumped on it.”

Ryan Croley, a retired Navy SEAL and hockey coach, is the WFLF director. Croley said that the area features the largest concentration of active duty military and veterans in the country.

“Hockey serves as an amazing connection point for these guys who are looking for camaraderie or looking to stay connected,” Croley said. “I’ve been told by a number of people, from them personally, or their family, that the program has kept guys alive. That’s one of my biggest takeaways. The competition is great, but it’s really about the camaraderie and what hockey does from a therapeutic standpoint.”

Hoff feels it’s incumbent upon his players and the organization to give back in an effort to support and grow sled hockey.

“I think we’re fortunate to be in the spot that we’re in, and we’re treated awfully well,” Hoff said. “There are a lot of guys who have paved the way for our guys to have it as good as they do right now in terms of the way we’re treated. To me, it’s part of our responsibility.”

Hoff said that Woodke and Dodson were part of the charity game, but they also hung around an extra day and sat with players from the WFLF Sled Hockey Program.

“Our guys sat down with each of their players and talked to them about equipment,” Hoff said. “They were giving ideas on how they could fine-tune their sleds and other hints. Our guys were just like them at some point trying to figure everything out, so I hope the impact helped them become better sled players. That was one of our goals.”

Hoff recalled a tender moment between Dodson and a young boy.

“He was telling him how he really needs to take care of his blades underneath his sled,” Hoff said. “All of the sudden, I saw Travis reach into his bag and pulled out a USA Hockey blade cover, he put it on the kid’s sled and the kid was just ecstatic. For Travis, it was probably no big deal, but for the kid, it was a big gesture. It definitely had USA Hockey on it, too, so it was something pretty cool for that young boy to get.”

Hoff and Croley spoke of the mutual respect displayed between both groups.

“It got emotional in the hallway,” Croley said. “[Woodke and Dodson] had been in the same places we had been. We kind of stomped the same ground together.”

Now, the two groups are stomping the same ground again. Only this time, it’s in an effort to promote and grow the game of sled hockey.

“We’re kind of a fledging sled hockey program down here, and to have those guys come down with the talent level that they have, just really created a lot of energy,” Croley said. “It was very impressive. They’re great ambassadors for the sled hockey program, and I can’t say enough for the way those guys represented the U.S. national team.”