Former U.S. standout is the first woman in Pittsburgh Penguins history in a scouting role

The timing turned out to be perfect for Krissy Wendell-Pohl and her family.

Wendell-Pohl and her husband John have three daughters, and the former USA Hockey and University of Minnesota star feels that she found the right balance for her family and the perfect opportunity to reignite a longtime passion.

The Pittsburgh Penguins hired Wendell-Pohl as an amateur scout in November. Wendell-Pohl is the first woman in franchise history to serve in a scouting capacity. It all stemmed from a conversation with Chris Pryor, the director of player personnel in Pittsburgh.

“I told him that I have three kids and that I’m a mom first,” Wendell-Pohl said. “But the more we chatted about what it looked like and based on where I was located, especially in Minnesota, and the opportunities where I could add value, but not necessarily have to fly all around … the more we talked, the more I realized it was a good fit for both ends and I was excited to take the opportunity.”

“I think it’s awesome that women are being valued,” Wendell-Pohl said. “There’s men’s and women’s hockey, but at the end of the day, hockey is hockey, and you’re evaluating talent. If you know the game and if you understand the game, if you’re knowledgeable from that side of it, there’s a lot of value to add.”

The Penguins have hired Krissy Wendell-Pohl as an amateur scout.

Wendell-Pohl, a two-time Olympian in 2002 and 2006, was inducted into the U.S. Hockey HOF in 2019 following a prolific playing career at the collegiate and international level.

Wendell-Pohl said she was a little hesitant at first.

“When you hear the word scouting, you think of traveling and flying all around in planes,” Wendell-Pohl said. “But this just seemed like the right fit. Being able to be a mom, but still having a passion for the sport, contributing, sharing my knowledge and being involved is the thing that excites me the most. I don’t have to pick one or the other. I can do both, and they gave me the flexibility.”

Wendell-Pohl said that she reached out to Granato for advice.

“When I made the phone call to her, she had nothing but positive things to say,” Wendell-Pohl said. “I know she’s a mom and she has young boys, too. It’s nice to have somebody to bounce some questions off of when you’re looking to get into something like this. She was a great resource for me and a great connection.”

Wendell-Pohl and Granato won a silver medal at the Olympic Winter Games in 2002. Wendell-Pohl, who won a bronze medal four years later in 2006, was inducted into the U.S. Hockey Hall of Fame in 2019 following a prolific playing career at the collegiate and international level.

“Anytime you can represent and wear the USA jersey, it’s quite the privilege and the honor,” Wendell-Pohl said. “I was lucky enough to be able to do it a few times.” 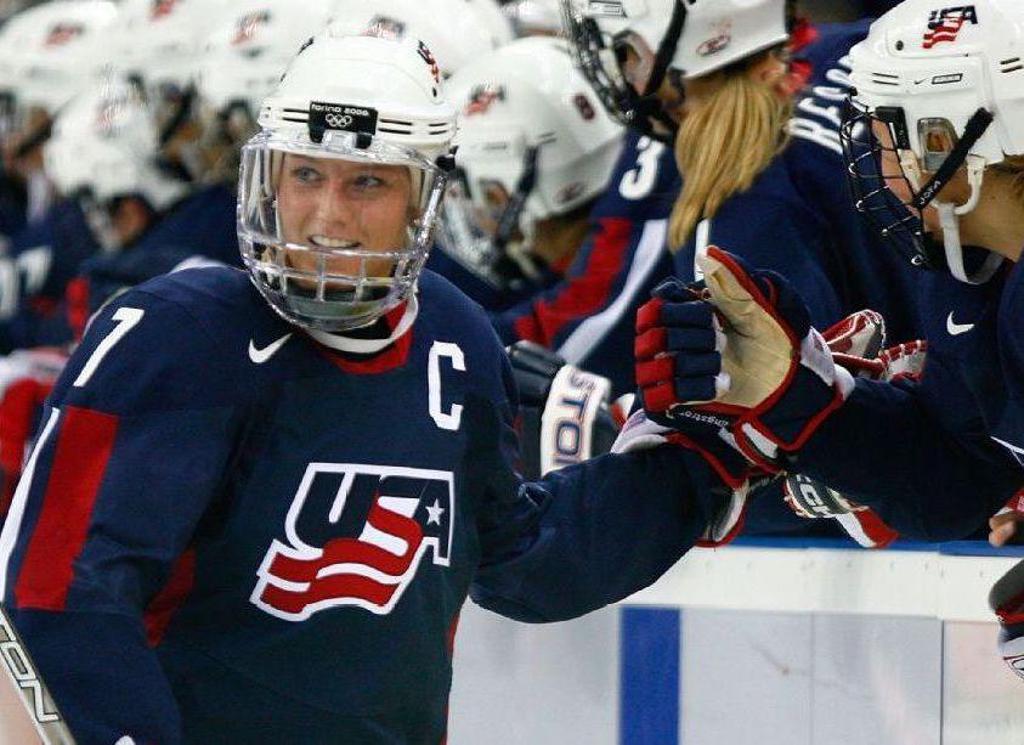 “When you’re playing, you’re just trying to get to the highest level and push yourself,” Wendell-Pohl said. “But when you look back at all the places I was able to travel and the people that I met, like Cammi, it was just an honor and I was really fortunate to be able to play as long as I was able to play.”

Wendell-Pohl, a native of Brooklyn Park, Minnesota, will primarily scout amateur players in the Minnesota area, including high school, college and some junior hockey.

“It’s the right opportunity, especially with where I’m at,” Wendell-Pohl said. “Being located in Minnesota where there’s a lot of young high school, college and junior hockey locally, I don’t have to do a ton of traveling, so it’s the right fit.”

Prior to her collegiate career, Wendell-Pohl scored 219 goals in two seasons at Park Center High School in Brooklyn Park. Wendell-Pohl, who scored 110 goals and 165 points in her senior year alone, was the first player in U.S. history — male or female — to score more than 100 goals in a single season. She accomplished the feat twice and graduated as the all-time leading scorer in Minnesota girls’ hockey history.

In college, Wendell-Pohl captained Minnesota to consecutive NCAA championships in 2004 and ’05. She scored 106 goals and 237 points in three seasons, good for fourth all-time in program history and 11th in NCAA women’s scoring. Wendell-Pohl scored the winning goal against Wisconsin in the WCHA title game and netted a hat trick against Harvard in the NCAA title game.

During her final season in Minnesota, Wendell-Pohl earned the Patty Kazmaier Award, presented annually to the top women’s college hockey player in the nation, after scoring 43 goals and 104 points in 40 games.

After her playing career ended in 2007, Wendell-Pohl married John Pohl, who also grew up in Minnesota and played in the NHL with the Toronto Maple Leafs. The couple has three daughters, Emily, 13, Anna, 11, and Lucy, 9, who all currently play in the Woodbury Area Hockey Club.

“When I was growing up, there weren’t many opportunities for girls to even play hockey,” Wendell-Pohl said. “Now, there are tons of opportunities and there are careers opening up. Hopefully, you’re going to see more of that as the next generation evolves and gets older, which is great.”

Wendell-Pohl is ready to embark on a new challenge as an NHL scout, while also continuing to support her daughters as a mom.

“Now, that my kids are a little bit older, it’s the right fit with the right organization, so I’m excited to get started,” Wendell-Pohl said.