“We have a group of assistants who not only bring passion and experience, but who know how to win,” said John Vanbiesbrouck, general manager of the 2022 U.S. Olympic Men’s Ice Hockey Team. “Together with David Quinn, we’re thrilled with the group of coaches that will lead our team in Beijing.” 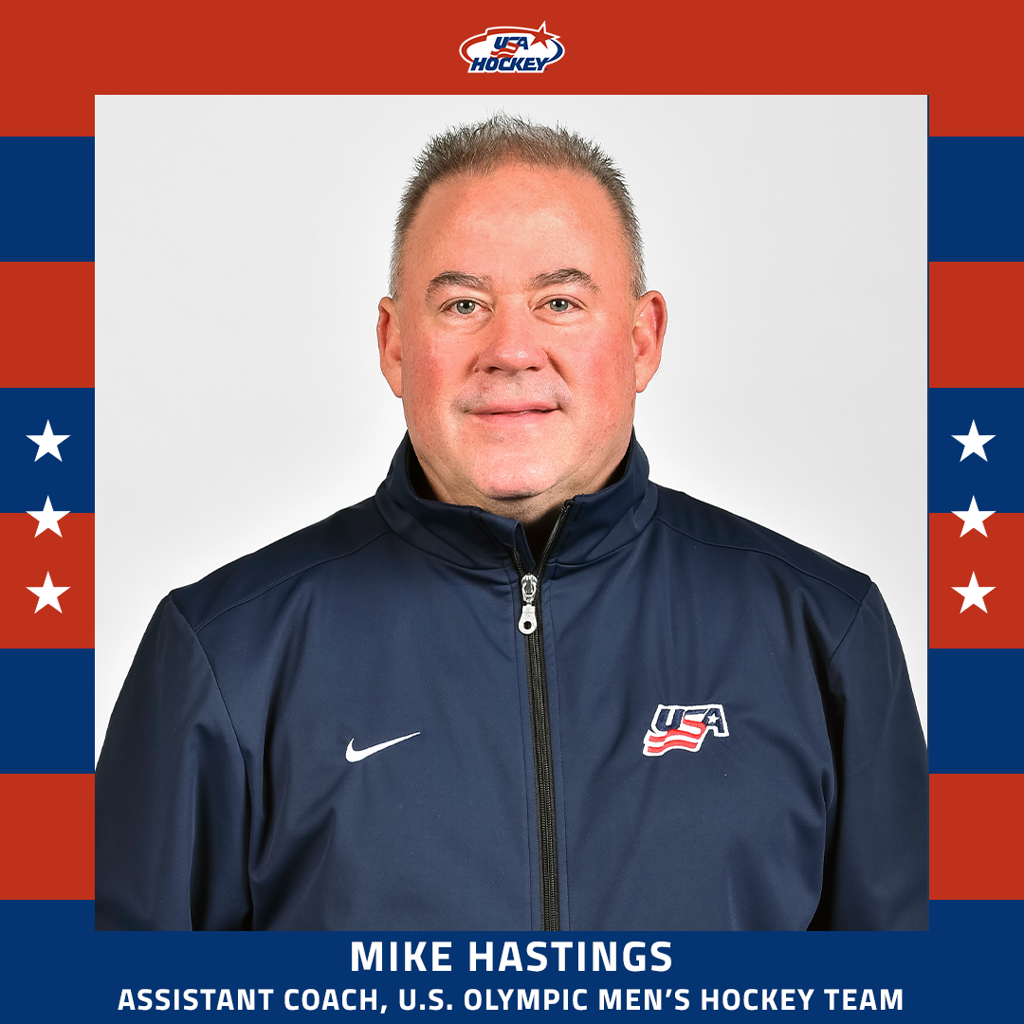 Mike Hastings is serving as an Olympic assistant coach for the first time, but is no stranger to international hockey.

He will be behind the bench of a U.S. team for the sixth time, with his last appearance as head coach of the silver medal-winning U.S. National Junior Team at the 2019 IIHF World Junior Championship.

In his 10th season as head coach of the Minnesota State men’s ice hockey team, where he has transformed the program into a national powerhouse, Hastings has led the Mavericks to more wins than any other team in the nation with a 236-89-24 mark entering the 2021-22 season.

His teams have advanced to the NCAA Tournament on six occasions, including a trip to the Frozen Four in 2021; won six Western Collegiate Hockey Association regular-season titles, including an unprecedented four consecutive (2018-21); and three league post-season championships.

The two-time NCAA Coach of the Year arrived at Minnesota State following a three-year stint (2009-12) as the associate head coach for the University of Nebraska-Omaha men’s ice hockey team. He also served as an assistant coach with the men's hockey program at the University of Minnesota (2008-09) for one season after a 14-year run (1994-2008) as head coach and general manager of the United States Hockey League's Omaha Lancers.

A 1993 graduate of St. Cloud State University, Hastings played two years for the Huskies (1986-88) before a back injury ended his playing career. 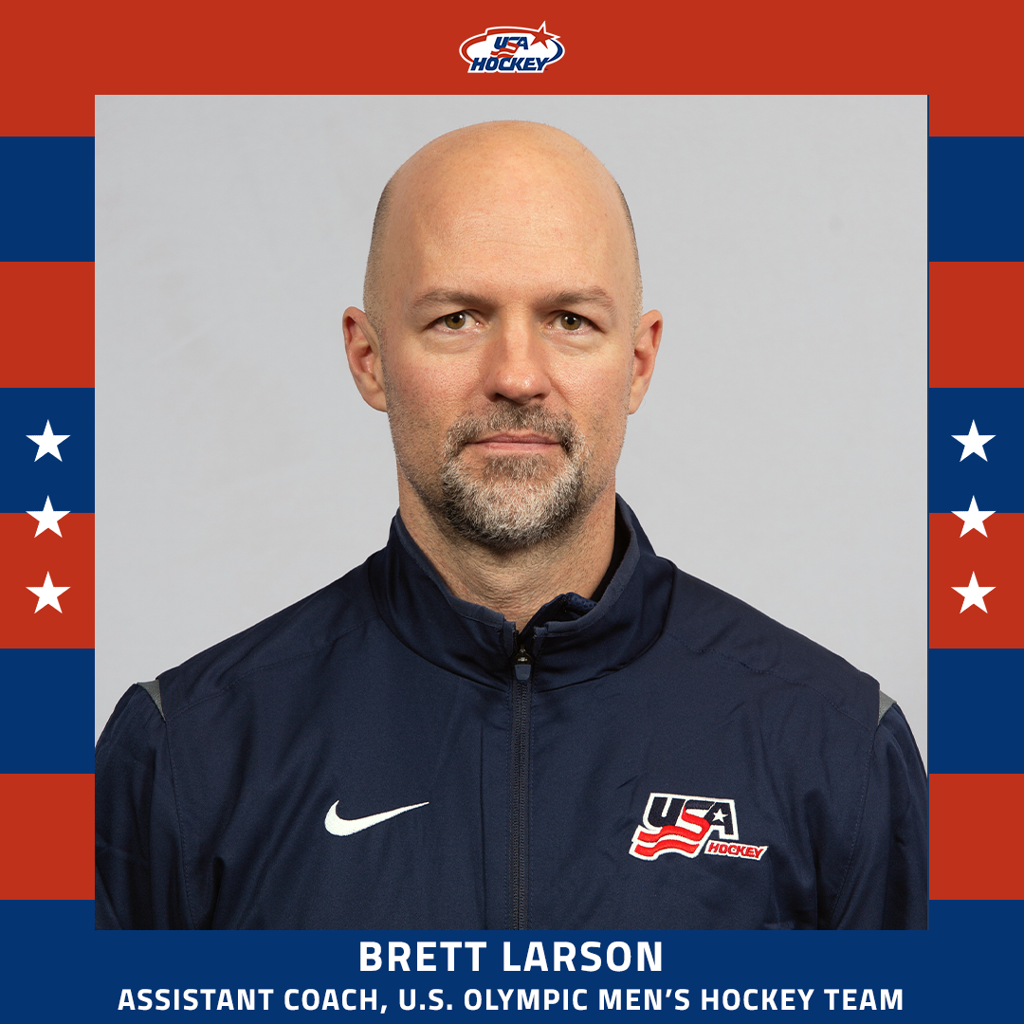 Brett Larson is making his Olympic coaching debut and will be on a Team USA bench for the third time.

Previously, Larson served as an assistant coach for the U.S. National Junior Team in the 2020 IIHF World Junior Championship. In 2012, he was the head coach of the U.S. Junior Select Team that won the World Junior A Challenge.

Larson is in his fourth campaign as head men’s ice hockey coach at St. Cloud State University where he has led the Huskies to two NCAA tournament appearances in his first three years, including a national runner-up finish in 2020-21. He entered the 2021-22 season with a 63-32-9 record at SCSU.

Before joining the Huskies, Larson served two stints (2008-11, 2015-18) as an assistant coach at his alma mater, the University of Minnesota Duluth. On both occasions, his time behind the Bulldog bench culminated in NCAA national championships, as Larson was part of the program’s first-ever title win in 2011 before helping the Bulldogs earn another national championship in 2018.

In between his time with UMD, Larson spent two seasons (2011-13) as head coach of the United States Hockey League's Sioux City Musketeers as well as a pair of seasons (2013-15) as an associate head coach at Ohio State University.

A Duluth, Minn., native, Larson played four seasons (1991-95) at UMD where he was tabbed captain his senior year and earned WCHA All-Academic honors three times. An 11th round pick of the NHL's Detroit Red Wings in 1990, Larson went on to play 12 years of professional hockey, including two (1999-2001) as a player-coach with the San Diego Gulls of the West Coast Hockey League. He also skated for the U.S. National Inline Team, helping the U.S. earn a gold (1999) and silver medal (1998). 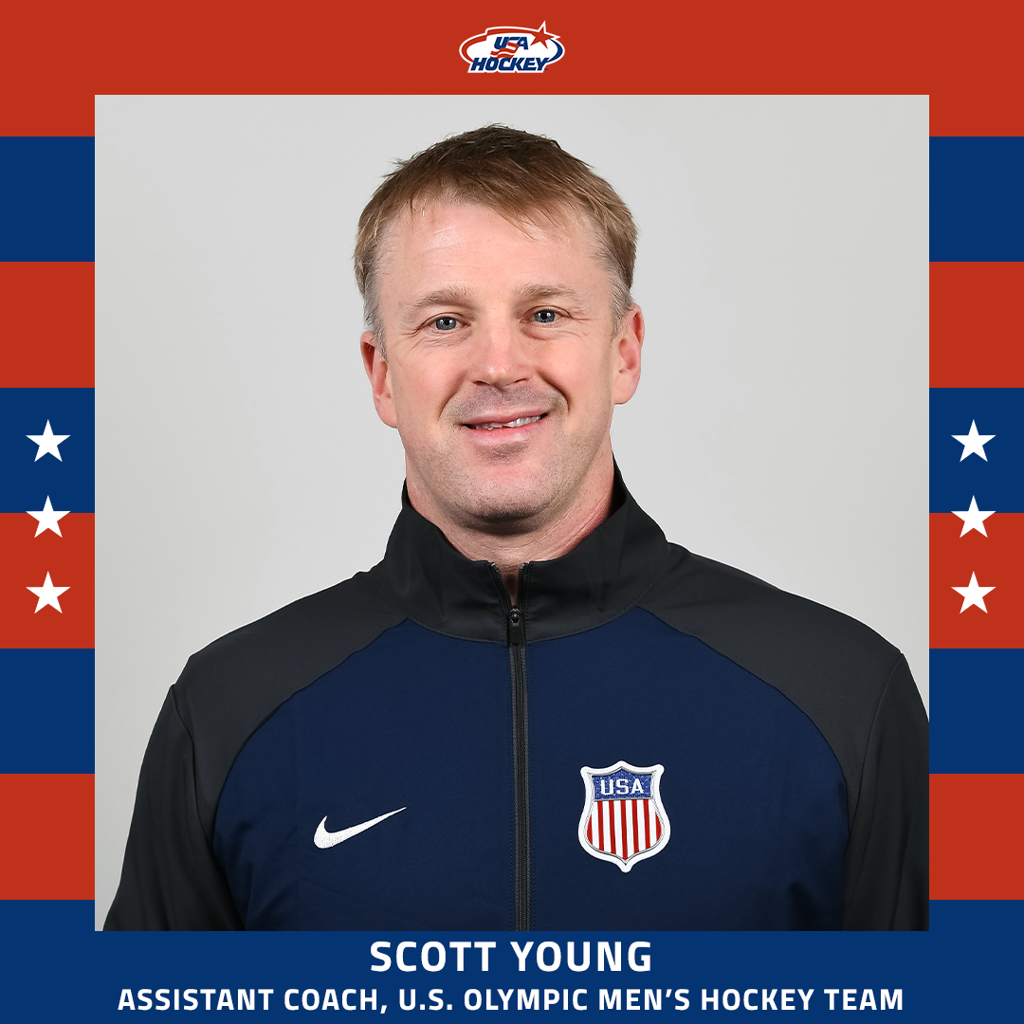 Young, who was enshrined into the U.S. Hockey Hall of Fame in 2017, is in his fifth year as the director of player development for the NHL’s Pittsburgh Penguins.

Prior to his role with the Penguins, he was an assistant coach for the men’s ice hockey team at Boston University for two seasons (2015-17) after serving as the Terriers director of men’s ice hockey operations in 2014-15.

Young’s international playing career spanned from 1985 through 2002. He is one of only 12 U.S.-born men’s hockey players to compete in three Olympic Winter Games (1988, 1992, 2002). He also played for the U.S. in three IIHF World Junior Championships, helping Team USA to its first-ever medal at the event in 1986 and went on to serve as team captain the following year.

Young also played for Team USA in three IIHF Men’s World Championships (1987, 1989, 1994) and played in one of the greatest moments in American hockey history as a member of the U.S. team that won the 1996 World Cup of Hockey. 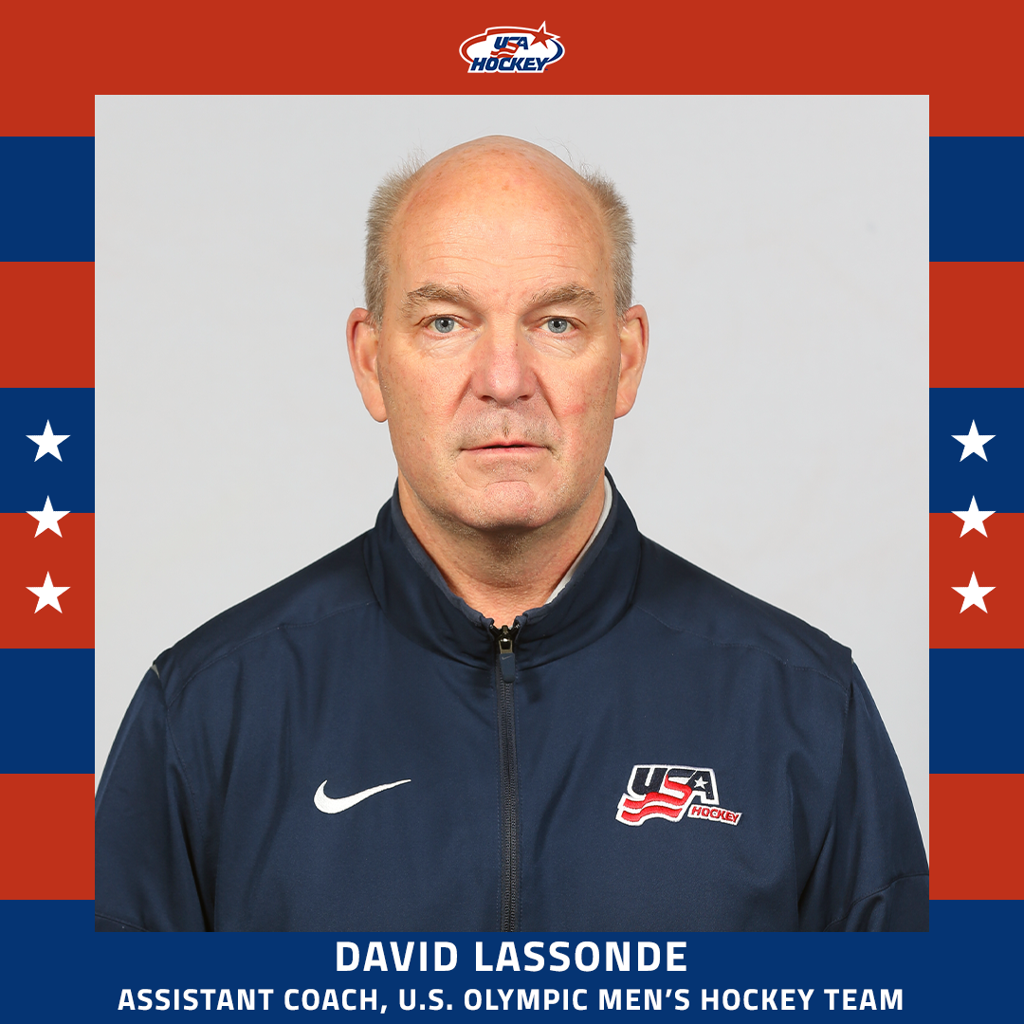 USA Hockey’s national goaltending coach, Lassonde has served as an assistant coach in support of U.S. teams on the international stage on multiple occasions, most recently with the U.S. National Under-18 Team at the 2021 IIHF Under-18 Men’s World Championship.

Lassonde has also worked with Team USA at the World Deaf Ice Hockey Championships, winning a gold medal in 2017.

Prior to joining USA Hockey full-time, he spent more than three decades as an NCAA Division I men’s hockey coach, including stops at Dartmouth College, University of Denver, University of New Hampshire, Miami University, and the University of Wisconsin. His resume includes 20 trips to the NCAA Tournament with five appearances in the Frozen Four, three conference tournament titles and six regular-season championships. He has coached numerous All-American goaltenders over his career, including the likes of Ty Conklin, Mike Ayers, Sam Brittain and Kevin Regan.

While at New Hampshire, the American Hockey Coaches Association (AHCA) recognized Lassonde with the Terry Flanagan Award in 2007, an honor presented annually to an assistant coach that has demonstrated a superior body of work throughout his career. 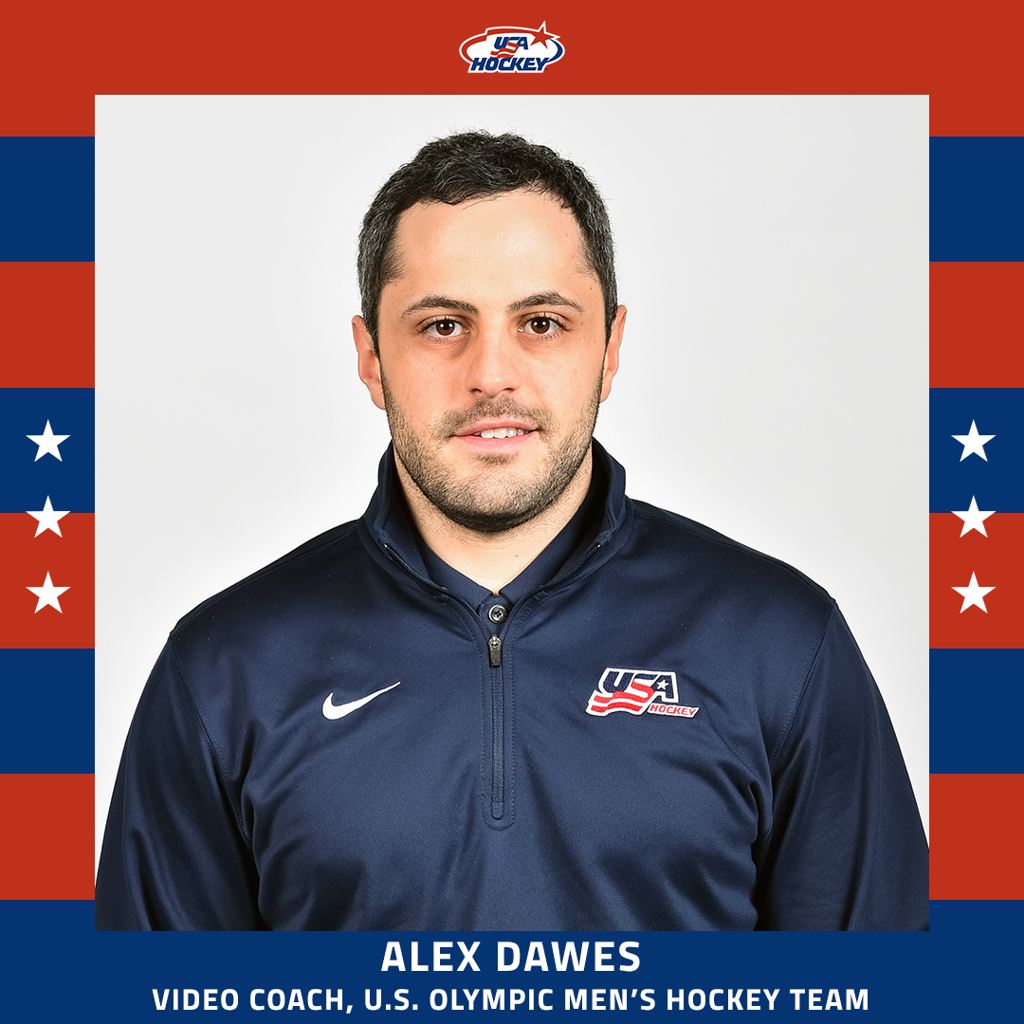 He has been on the staff of two previous U.S. national teams in similar roles, including for the  silver medal-winning 2019 U.S. National Junior Team and the gold medal-winning 2016 U.S. Under-18 Women’s National Team.

Dawes is in his ninth season with Penn State University and his sixth as director of hockey operations for the Nittany Lions men’s ice hockey program where he handles all internal and external video efforts, assists in pregame and postgame preparation, and coordinates travel plans. During his time at PSU, he has also served as part of the coaching staff for the Penn State women’s ice hockey team, working with the defense, penalty kill and video coaching.

A 2012 graduate of Utica College, Dawes served as assistant coach/director of hockey operations for the UC men’s ice hockey team for four seasons (2009-13). During his time at Utica, the Pioneers improved every season, going from an 8-14-4 record in 2009-10 to a 21-6-1 mark in 2012-13 en route to the NCAA Division III semifinals. Dawes spent his freshman campaign (2008-09) attending the University of Vermont where he served as director of hockey operations for the men’s ice hockey team, a season the Catamounts reached the NCAA Frozen Four for the first time since 1996.