BEIJING – In an era of N-95 masks, social distancing and daily Covid tests, it may be easy to forget the reason for all the blood, sweat and tears it took to get here.

This is not just any old hockey tournament. These are the Olympic Winter Games, and the United States is the defending champions in women’s ice hockey.

And while the reminders of living through a global pandemic are impossible to forget, Joel Johnson is doing his best to keep his team focused on the task at hand without taking their eye off the challenges of everyday life inside the Olympic bubble.

“I think the stresses are incalculable. It’s no different than everyday life. You look at how COVID has impacted every single part of everybody’s life, it changes everything,” Johnson said after his team’s fourth practice in as many days since arriving here on Jan. 29. 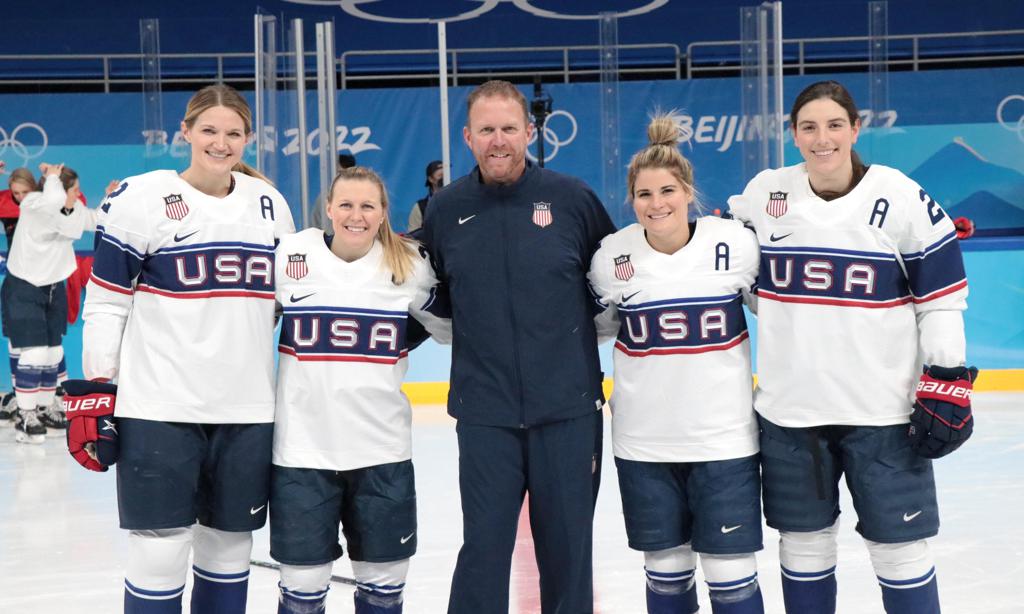 In an era of so much uncertainty, the 23 women who make up the U.S. Olympic Team have found that the one thing they can count on is each other.

“We talked about the fact that our team is going to be so close because they’re the one group that can kind of stay in the same protocol together,” Johnson said. “It’s been tough, very tough. All of those details have put an incredible amount of emotional and physical stress on players. That’s not just Team USA. That’s everybody, staff included. We can’t wait to be done with COVID.”

Before that day comes, there’s the small matter at hand of defending an Olympic gold medal against a field of teams eager to knock the U.S. from the top of the podium.

After taking a couple of days to shake off the cobwebs after a grueling journey from Blaine, Minn., to Beijing – with a stopover in Los Angeles in between – Johnson’s charges are finding their legs and have been turning up the intensity and tempo over the past couple of days.

“Every day has been kind of a step forward. Yesterday was good. I thought today was better,” Johnson said.

“Our players have done a great job adjusting to trying to get going on the ice with a lot of tempo and a lot of flow.”

They’ll need every bit of that when they face a tough opponent right out of the gate in a disciplined and defensive-minded Finnish team. While the U.S. has never lost to the Finns in Olympic competition – they are 8-0 all-time – anyone who has stared down the Lion in international competition knows they are never an easy out.

“When I think about Finland it’s a heck of a draw, but I think it’s a perfect way to start,” Johnson said. “It’s going to be one of those situations where if we don’t show up ready to go we’re going to be in for a long day.”

After facing Canada seven times in the lead up to the Olympics, the players are excited to face off against someone not wearing red and white.

“We’re grateful to play Finland. They’re a great competition for us and it’s nice to start off with that intense level of play,” said U.S. goaltender Maddie Rooney. “It’s going to be a good challenge for us, but it’ll set us off on the right foot and we’re looking forward to it."

Johnson is eager to see how the eight newcomers on the U.S. roster will deal with the nerves and adjust to the increased pressure that only comes by playing on the biggest stage in the sport. Based on the past several months in residency camp and in My Why Tour games against Canada, he is confident they’re up to the challenge.

“I was watching our team photo group today and they had all the newcomers take a photo together and I was thinking, ‘Wow, there’s that many?’” Johnson said.

“I think the interesting part of our newcomer group is you’ve got different age ranges. You have newcomers that are really veteran players who have been around USA Hockey camps and a lot of high profile and high pressure experiences.”

In addition to a number of Olympic veterans, including four-time Olympian Hilary Knight, Johnson has an ace in the hole on his coaching staff in Courtney Kennedy, who is ready to deliver her own pep talk about dealing with what to expect in the lead up to puck drop.

“She’s looking forward to talking to the group and giving them some feedback and some personal sharing of what life is like,” Johnson said of the two-time Olympian who has proven to be an invaluable member of his staff.

“I’m sure there’ll be some nerves in that first game but once the puck drops then it’s hockey and they can enjoy themselves.”