BEIJING - Sean Farrell (Hopkinton, Mass.) had five points, including three goals, and Drew Commesso (Norwell, Mass.) recorded a 29-save shutout, to lead Team USA to an 8-0 win over China tonight in the opening game of the preliminary round for both teams at the 2022 Olympic Winter Games.

“It was a good start for us and I thought we got better as the game went along with the third period being our best,” said David Quinn (Cranston, R.I.), head coach of the 2022 U.S. Olympic Men’s Ice Hockey Team. “They’re tough to play against and hats off to them.”

Farrell’s five points were the second most for an American player in the modern era of the Olympics (1956-present) and the most since Bill Cleary recorded six points (4-2—6) on Feb. 24, 1960, against Germany. His three goals marked the first hat trick since Phil Kessell scored three times against Slovenia on Feb. 16, 2014.

The U.S. came out strong in the opening frame, forcing a powerplay opportunity just 1:06 into the period. Nathan Smith (Hudson, Fla.) nearly scored on the man advantage with a chance in tight, but Chinese netminder Shimisi Jieruimi was up to the challenge. Midway through the first period, goaltender Commesso thwarted a Chinese rush with a pad save, while picking up an interference penalty, putting the U.S. on the power play for a second time. Brendan Brisson (Manhattan Beach, Calif.) started high above the faceoff circle, finding Matt Knies (Phoenix, Ariz.) in the slot. The initial shot attempt from Knies was deflected, but Brisson quickly picked up the loose puck and fired it above the shoulder of Jieruimi, giving the U.S. a 1-0 lead.

Team USA kept momentum going early in the second, and took a 2-0 lead on a highlight reel goal. Farrell received a chip pass behind China’s net, and delivered a no-look spin pass to the tape of Noah Cates’ (Stillwater, Minn.) stick. 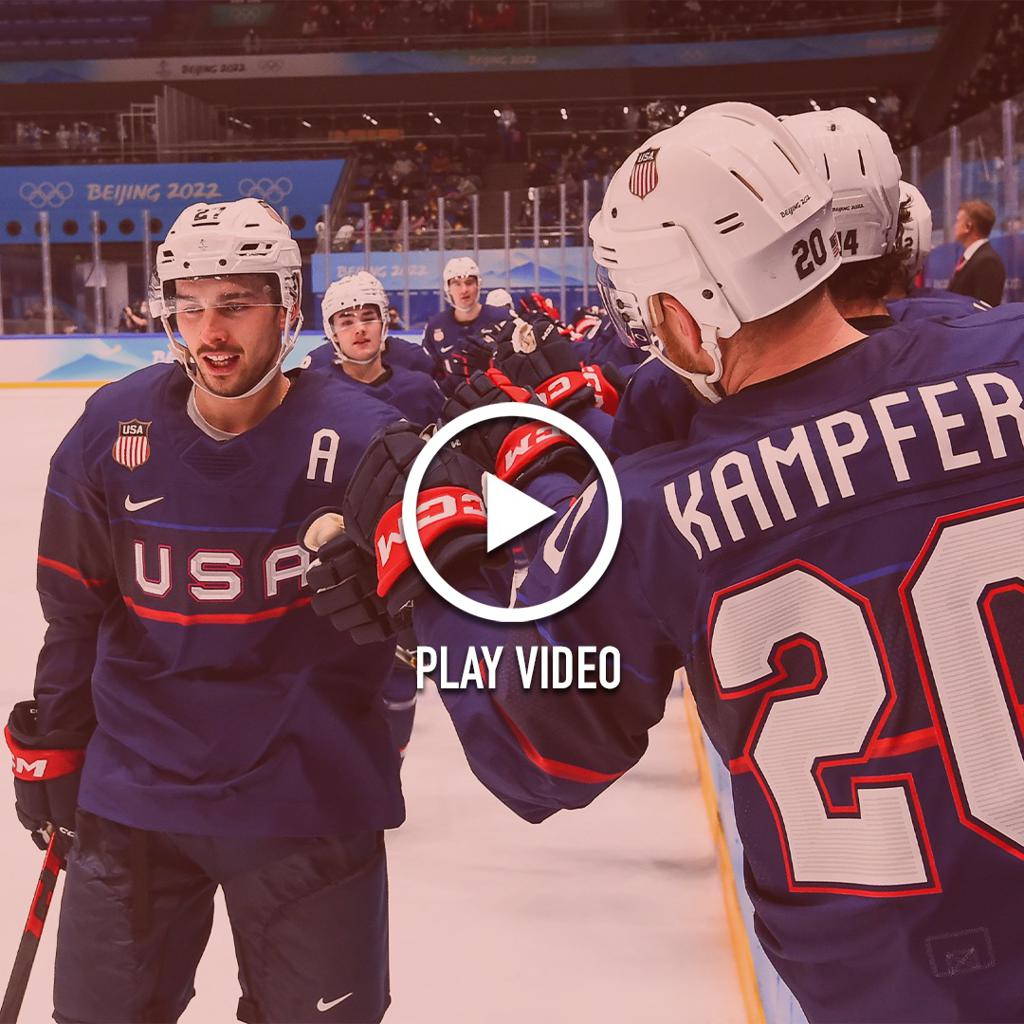 The U.S. and China each took penalties three seconds apart, but it was the U.S. that would take advantage of the four-on-four action. Defenseman Brock Faber (Maple Grove, Minn.) patiently found a streaking Andy Miele (Grosse Pointe Woods, Mich.) who drove to the net and delivered a no-look pass to the skate of Brian O’Neill (Yardley, Pa.). O’Neill pushed the puck to his stick, and forced the puck past an outstretched netminder, giving the U.S. a three-goal advantage.

With less than two minutes remaining, Farrell picked up his second point of the game, this time a goal. Faber forced a turnover in the neutral zone, as Farrell joined the rush with forward Nick Abruzzese (Slate Hill, N.Y.). A quick saucer pass to the stick of Farrell left him with an uncontested shot, that he buried under the crossbar for a 4-0 lead heading into the final period.

Farrell scored his second of the game 1:06 into the third period, after defenseman Steve Kampfer (Jackson, Mich.) joined the offensive pressure and delivered a pass from behind the China net. After dishing out two assists earlier in the game, Ben Meyers (Delano, Minn.) scored his first of the night on a backhand shot at the front of the net. Farrell was credited with an assist on the goal. Matty Beniers (Hingham, Mass.) picked up a drop pass from Abruzzese, and wound up for a wrist shot that beat Jieruimi on his glove side.

China took to a 5-on-3 power play with five minutes remaining, but Commesso and the penalty kill were up to the challenge. With just over 90 seconds left in the final period, Farrell completed the hat trick with a one-time shot on the power play from the slot to account for the 8-0 final.