Americans seem ready for whatever opponents throw their way

BEIJING – Brock Faber is shoved from behind while racing for a loose puck and crashes awkwardly into the boards. Drew Helleson is sent flying by a check courtesy of a Chinese forechecker. And Sean Farrell is upended by a big hit in the neutral zone.

And that’s just the first period of the U.S. team’s 8-0 victory against China in the opening game of the tournament.

Welcome to the Olympics, boys. There’s plenty more where that came from.

It’s no secret the U.S. Men’s Team is the youngest and one of the smallest teams competing at these Olympic Games. They’re also one of the fastest. So opponents are going to find ways to knock these high-flying youngsters off their game. And if they can put a little doubt in their minds and fear in their hearts along the way, all the better.

That’s fine with the Americans. They are ready for whatever is thrown at them.

“I think that’s the way it’s going to happen. Teams are going to try to slow us down with their physicality,” said U.S. head coach David Quinn. “I give China a lot of credit. The score may not have seemed like it, but it was a hard game for us. They were physical, but we didn’t back down. We kept coming.”

Playing China was a good way for some of the youngsters to get their feet wet in the tournament. Four collegians found the back of the net, including Sean Farrell who registered a hat trick. 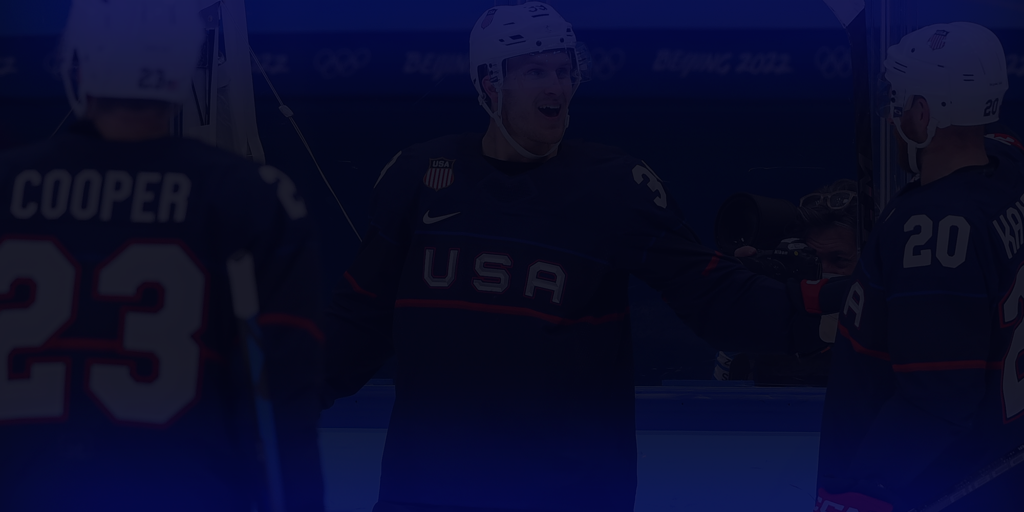 “In a short tournament like this you have to get guys feeling good,” said Brian O’Neill, the only returning player from the last Olympic team. “You saw it in 2018 when Ryan Donato got off to a good start. We had a couple college kids get off to really good starts. Ryan carried that confidence into the rest of the tournament. I think you’ll see the same throughout the rest of the tournament with these young kids.”

The Americans already have some idea of what to expect when they face off against Canada. The two teams scrimmaged earlier in the week, and while there was a mutual level of respect as both teams looked to work on their own games, the same can’t be said when they meet for real on Saturday.

“They’re obviously a really good team. They’re a lot like us in that they’re skilled, they’ve got some speed and they’ve got some depth. They also have some older veterans who know how to win tight games,” said Matty Beniers, who scored his first Olympic goal during a four-goal third period.

“I think it’s just going to be who wants it more and who plays the game in more of the right way and who’s able to capitalize on their chances. Both teams are really good, so it kind of comes down to that.”

The winner will have the inside track on winning Group A, which brings with it an automatic berth in the quarterfinals. The loser will likely have to play a qualification game in order to advance.

One thing the U.S. is hoping to do is make teams pay for when their physicality crosses the line by scoring on the power play. They managed to score two power-play goals against China, the first coming off the stick of Brendan Brisson to open the scoring. Everyone knows the team will need to keep it clicking as they face even more physical opponents like Canada and Germany.

“It was really nice to score the first goal. Hopefully I have a couple more in me to help the team win,” said Brisson, a 20-year-old sophomore at the University of Michigan.

“Everyone here is a great player and it’s all about just managing your mistakes and puck management. I felt pretty confident out there today and we’re just going to keep the same mojo going.”