Riding on five hours sleep and pumped full of adrenaline, Jake Sanderson made his presence felt in his Olympic debut

BEIJING – The pregame playlist blaring from the speakers inside the National Indoor Stadium includes an eclectic mix of Chinese pop music and assorted classic rock favorites mashed together with a disco backbeat.

A more appropriate song that should have been added to the mix before the U.S. game against Canada is Metallica’s Enter Sandman.

Riding on five hours sleep and pumped full of adrenaline after dodging the Covid-19 bullet, Jake Sanderson made his presence felt in his first Olympic hockey game, a massive 4-2 victory.

The win catapulted the U.S. into the driver’s seat as they look to do something not many so-called experts believe is possible. They took the first step in proving the doubters wrong here tonight.

The 19-year-old Whitefish, Mont., native wasted little time showing his teammates and the rest of the international hockey world why the Ottawa Senators selected him 5th overall in the 2021 NHL Draft. 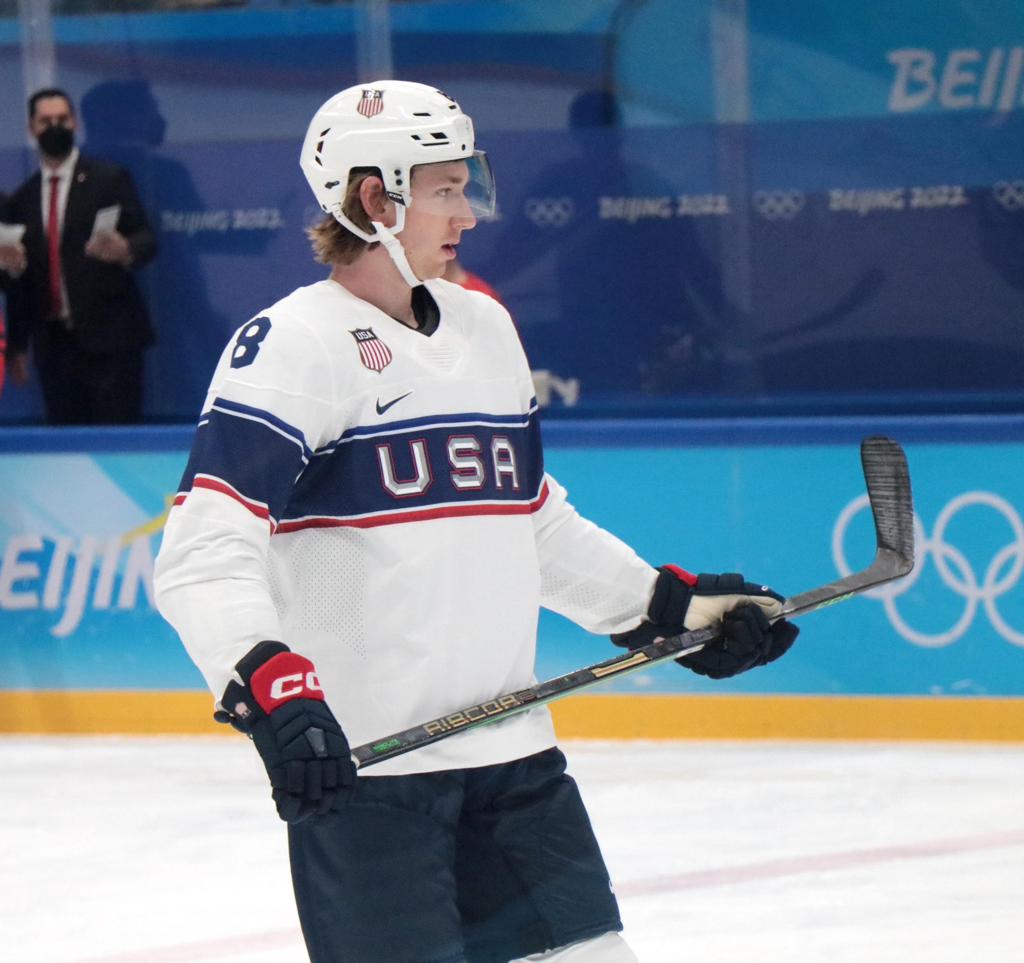 During his nearly 17 minutes of ice time, Sanderson and his talented young teammates provided a veteran Canadian team and a late night television audience back home a glimpse into the future of the NHL.

“I knew he was a talent coming into this tournament,” said veteran forward Kenny Agostino, whose third-period goal put the game on ice for the Americans.

“Getting on a bird and traveling for 36 hours and jumping into an Olympic hockey game against Canada, just shows how poised and smooth he is. It says a lot about him, not only as a player but as a person to have the maturity to be able to handle that situation.”

Sanderson arrived in Los Angeles on Jan. 30 for Olympic in-processing and skated once with the team at the LA Kings practice facility before being flagged with a positive Covid test.

While his teammates were getting ready for their first game, Sanderson spent more than a week in quarantine in an LA hotel, waiting to register two consecutive negative tests before being allowed to travel. He was finally cleared to fly here on Feb. 9 and practiced with the team soon after arriving at the athletes’ village.

After hitting the sack early last night, he awoke refreshed and ready to face off in the pivotal matchup against one of the pretournament favorites.

“Last week was pretty frustrating for me, but now that I have my first game under me, I feel a little better,” said the University of North Dakota sophomore.  “I feel like I haven’t played in around two weeks.”

Having Sanderson in the lineup meant the U.S. was finally at full strength and ready to make a run at the gold medal. If his teammates were happy to see his No. 8 jersey on the ice, the coaches were ecstatic.

“It’s good to have him in the lineup,” said head coach David Quinn. “He’s a special player and he’s got special abilities. I just like the direction his game’s going.”

That direction is definitely up, especially after such a big win against an opponent with an average age that was more than four years older than the upstart Americans. While Canada may have the size, strength and experience to be a force on the international stage, the Americans found a way to harness their speed and youthful enthusiasm to keep the Canadians on their heels for large swaths of the game.

“We knew they were going to play physical on us. The key for us was to tip pucks past them and use our speed,” said Sanderson, who assisted on Ben Meyers’ goal that would prove to be the game winner.

“We’ve got a special group here. Even though we’re young, we’re full of energy.”

Sanderson and crew have little time to savor the victory, with Germany waiting in the wings. A third victory in as many games would give the U.S. the top spot in Group A and a berth in the quarterfinals. Otherwise they would likely have to play a qualification round game to advance.

After a good meal back at the athletes’ village, Sanderson is likely to catch up on his sleep. Or maybe he’ll look to make up for lost time and dive head first into the Olympic experience.

“This is a once in a lifetime opportunity, so I’ve just gotta embrace it,” he said.

After all, he can sleep when it’s over.