Edwards was named the MVP of the tournament, recording eight points in five games

MADISON, Wis. — As the U.S. Under-18 Women’s National Team prepared for the 2022 International Ice Hockey Federation Under-18 Women’s World Championship, the group needed to figure out its captains.

It was only natural the only two returners — Danielle Burgen and Kirsten Simms — from the last time the team played in international competition were voted as captain and alternate captain. That left one alternate captain spot open out of the remaining 21 players on the roster.

When voting concluded, Laila Edwards was an overwhelming choice.

The 18-year-old from Cleveland Heights, Ohio,  was going to be competing in her first international competition, but she was already a favorite in the locker room.

“I think that just speaks volumes to what the players think of her,” said head coach Katie Lachapelle “They had to say why they thought somebody should be a captain and all the comments were, ‘She’s a leader, she’s mature, she’s going to guide us the right way, she’s going to make sure that she’s looking out for the best in everybody.’ The comments were fantastic.”

Edwards was honored to wear the “A” on her left shoulder of her jersey.

“My teammates, I just try to be inclusive, there for everyone and try to make everyone feel special,” Edwards said. “I think I’m pretty welcoming. I bring a calm presence.”

Her teammates appeared to have made the right decision. Edwards made a huge impact on and off the ice throughout the tournament, helping her team capture silver at worlds.

Edwards always provided a spark when the U.S. needed it most.

“Those times on the bench when there’s a little bit of a lull, all of a sudden you’ll hear a voice kind of pick it up and get us back on track on the bench with that energy or in a meeting or something, and it’s always her,” Lachapelle said.

Edwards was quick to point to her teammates for all her on-ice success in the tournament.

“They just see me in the right place or they make the right play and I just capitalize off of it,” Edwards said. “Also, having fun and feeling comfortable is a big thing, too.”

Lachapelle saw Edwards really turn up her game to an elite level during the weeklong tournament.

“I don’t know if it was, OK, everything’s going to be harder,” Lachapelle said. “I hope as soon as she gets to [college], she’s just firing on all cylinders and really pushing because there’s been a huge change. I watch her all year and she always plays so well, but I do think something’s like, I can do this and I can be the best player.”

Edwards, a forward who played her high school hockey at Selects Hockey Academy in Rochester, New York, considers herself a playmaker. Her lanky 6-foot-2-inch figure helps her glide on the ice.

Edwards’ ability to score is aided by a combination of attributes.

“I think I’m huge on vision, so if I see an opportunity, I take it,” Edwards said. “Then my size helps and just feeling comfortable.”

Despite coming up one win shy of her ultimate goal of winning a gold medal, Edwards said she had a great experience in her first international event.

“I’m learning more and more from my teammates, my coaches, have fun while winning,” Edwards said. “Play your best hockey, get out of your comfort zone. Like I said early, try to find an extra gear, because this isn’t like a walk in the park.”

With Team USA playing all its games in the tournament at LaBahn Arena on the University of Wisconsin campus, Edwards was able to get a preview of her future.

Edwards is committed to play at Wisconsin under head coach Mark Johnson. She chose the Badgers — winners of six national championships in the last 16 years — over a number of other schools.

Edwards loved getting to skate in her next home rink.

“It’s a bit surreal because playing at your upcoming home rink, so I’m getting comfortable,” Edwards said. “I have a bit of an advantage and I already feel like I’m at home.”

Seven out of the 23 players on the U18 Team will be playing their college hockey at Wisconsin. Edwards, Simms and Claire Enright will compete this fall for the Badgers, while Ava McNaughton, Laney Potter, Kelly Gorbatenko and Cassie Hall have committed for the Class of 2023.

“A couple times we just looked at each other and we’re like, ‘This is so cool,’” Edwards said. “Love the arena, love the facilities, it’s so nice and we’re playing in one of the most fun tournaments in it.”

Another perk of going to Wisconsin is Edwards will get to play with her sister, Chayla, for the first time ever. Chayla is a senior and three years older, and the two sisters have always competed at different levels moving up the hockey ranks.

Edwards can’t wait to get on the ice with her sister and form a formidable duo.

“It’s going to be a lot of fun and I’m going to definitely use it to my advantage,” Edwards said. “Learn from her, bounce ideas off of her, gain some confidence from her.” 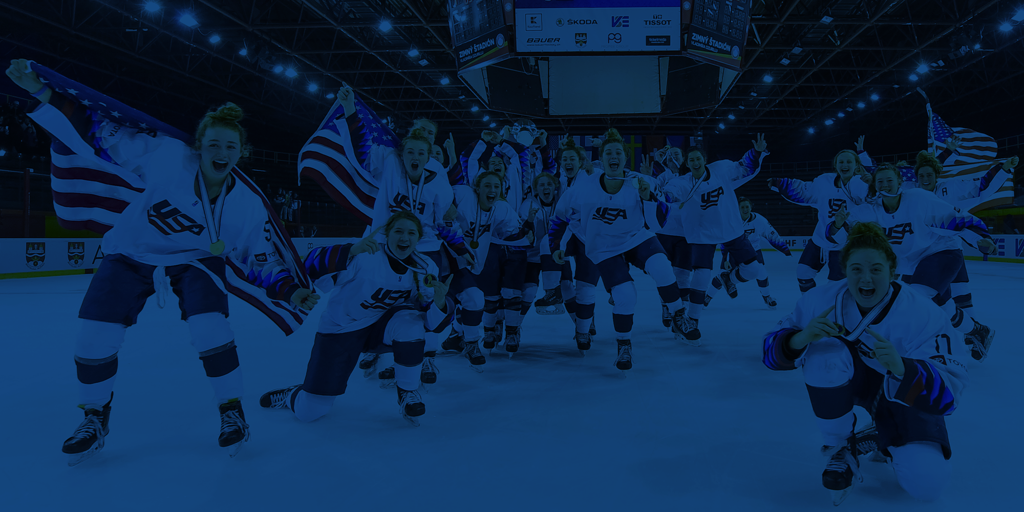