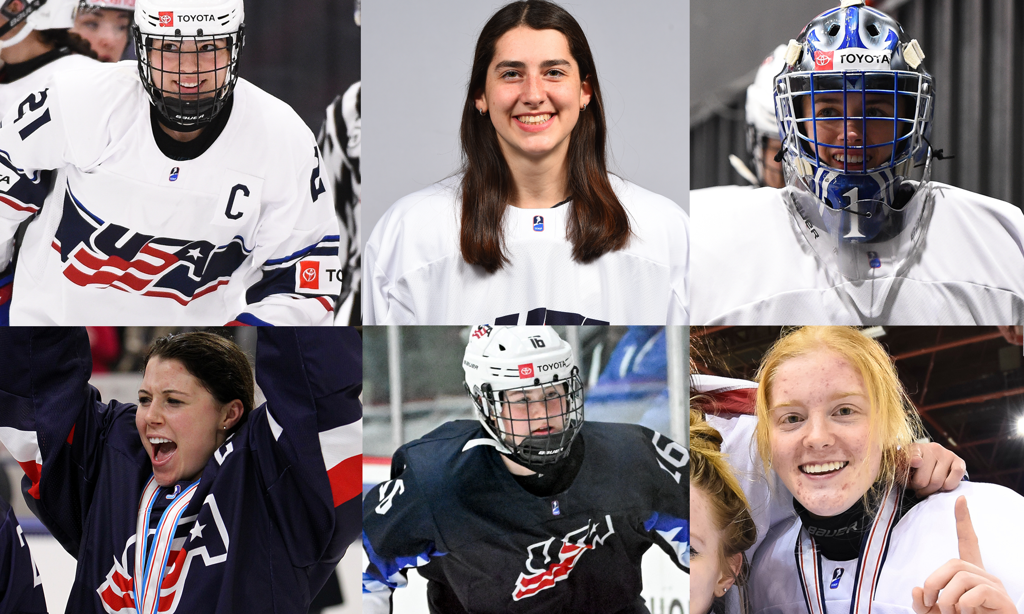 A tournament as big as the IIHF Under-18 Women’s World Championship can be nerve-wracking for anyone.

But for someone who has a family member who can attest to the high emotions and pressure of the tournament, the experience can be a little different.

For Joy Dunne (O’Fallon, Mo.), Rose Dwyer (Wynnewood, Pa.), and Layla Hemp (Chanhassen, Minn.) – teammates on this year’s Under-18 Women’s National Team – their bonds with older sisters who have experience representing the U.S. at U18 Women’s Worlds have helped ease the nerves that come with wearing the USA jersey for the first time.

“Her supporting me is really cool,” said Dwyer, whose sister Grace was a member of the silver-medal winning U18 team in 2022. “She talks to me every day and gives me advice and asks me how I’m doing and helps me out and it’s really helpful to have her support.”

Hemp’s sister, Peyton, appeared in all five games for the gold medal-winning 2020 team in Slovakia.

“Her support means so much to me,” said Hemp. “I don’t know what I would do if I didn’t have a sister that played at this level.”

“You just have so many questions to ask. I really like learning and wanting to be better, so her having been through all this just means so much to me.”

Dunne’s sister Jincy, a current member of the Women’s National Team, famously scored the electric overtime goal against Canada in the 2015 U18 Women’s Worlds, the U.S.’s first goal medal in the tournament since 2011.

“Her compete level and how she works is incredible. She was a captain on that team,” recalled Dunne, who is constantly inspired by her sister’s leadership. “Just how she leads, I was just like ‘I want to do that’.”

Dunne has made her mark as her own leader on the 2023 Under-18 Women’s National Team, being named the captain for the tournament, forging her own path her sister blazed before her as captain of the 2015 squad.

For Dwyer, watching her sister Grace dominate in last year’s tournament held in Madison, Wis., has motivated her in more ways than she can count.

“When I watched her play last year, I just looked up to her and watched everything she was doing,” said Dwyer. “We’re similar players but I can learn a lot from her.”

Dwyer can remember the first time she began to play hockey as a young girl. Influenced by her sister who began playing before her, she wanted to eagerly follow in Grace’s steps.

For Hemp, her experience with hockey began very young, at about two years old, when she was around the rink as her siblings played. She started out as a skater before quickly transitioning to becoming the goalie of the family.

Although playing a different position, she still uses her sister Peyton’s accomplishments to motivate her in goal.

“She just got freshman of the year last year, which made me so proud of her,” said Hemp, speaking about her sister’s impressive freshman season at the University of Minnesota. “She always just pushes me and seeing her accomplishments makes me feel like I could be better.”

Peyton’s ability to provide a different perspective has allowed Layla to transform her game on the ice, giving her insightful knowledge on things like anticipating scoring chances from her opponents.

The trio of Dunne, Dwyer, and Hemp speak highly of the ways their sisters have prepared them for the tournament, from repeated text messages to reassuring phone calls.

“We’ve been talking quite a lot, she’s always right there for me. As I was going, she was saying ‘Do you have this, what about this? Think about this,’” said Dunne. “She was my number one helper, I text her about everything, and I still do but she’s right there on the phone and if I need her, she’s there. So it means a lot to have her support.”

When asked if their sisters gave them any advice before they took off for Sweden, they all began to smile.

“She said to really take everything in, and sometimes it’ll be hard,” Hemp said of the advice hersister gave. “She told me to make the best of everything, and that it’ll get better day by day.”

“She just said, ‘It’s a special moment so just take it all in. It’s a lot of fun, so embrace it,” said Dwyer, who trains with her sister off the ice. “She said whatever role you play, just accept it and play the best role that you can for the team and just go for it out there.”

Athletes have many mentors throughout their careers who inspire them and help them reach their goals. Lucky for Dunne, Dwyer, and Hemp, their role models are just a phone call away.