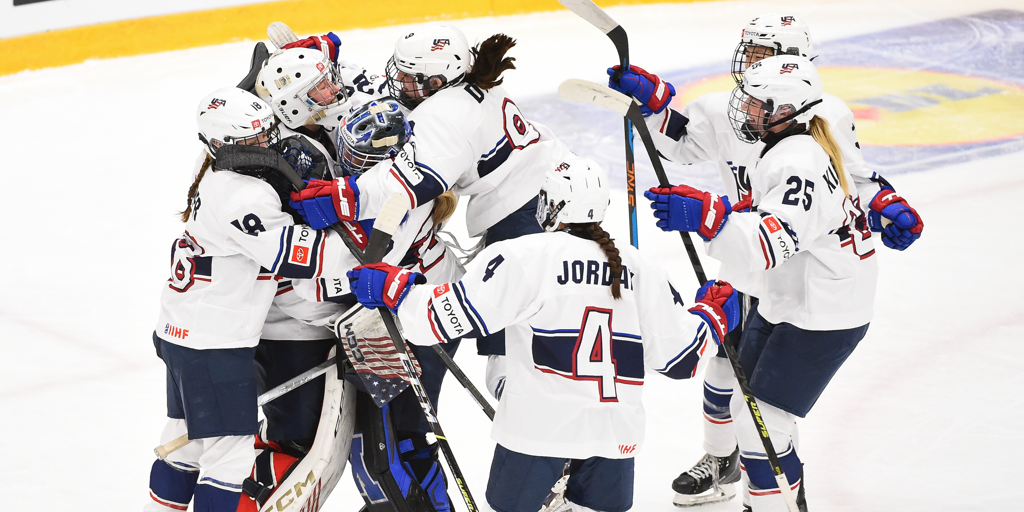 For the second time this month, a U.S. National Team is coming home with bronze.

Matching the medal the National Junior Team won at World Juniors in early January, members of the U.S. Under-18 Women’s National Team captured a medal for the record 15th consecutive season at their world championship this week in Östersund, Sweden.

The 2023 tournament marked the 15th anniversary of the IIHF U18 Women’s World Championship, and the U.S. has medaled in every year of its existence.

The U.S. victory in the bronze medal game was arguably its most complete showing of the eight-day tournament. Joy Dunne (O’Fallon, Mo.), Samantha Taber (Tewksbury, Mass.), Kendra Distad (Burnsville, Minn.), and Allie Lalonde (Irvine, Calif.) each lit the lamp for Team USA in the win. Annelies Bergmann (Detroit, Mich.) made 23 saves and earned her first shutout of the competition.

“I'm really proud of the way we played,” said U.S. Under-18 Women’s National Team head coach Katie Lachapelle (Lewiston, Maine). “Our players bounced back [after their semifinal loss to Sweden]. This is a tough bounce-back game to be in. They gave it their all and stuck together as a team.”

While the team was not playing for the medal they hoped they’d be battling for when the tournament began, Lachapelle said she and her staff reminded the players that they still had an incredible opportunity to play for a medal in a world championship.

Ending the tournament on a high note with a decisive win gives the team and players something to build off of, but it’s not the only thing Lachapelle believes the players will take with them from the experience.

All week in Östersund, the staff and players talked about the bond the team had created. Lachapelle said when the roster was announced, the players immediately formed a group chat and began to get to know one another. When the team finally gathered, the staff was impressed to see players going out of their way to get to know one another. Several of the players on this year’s roster play together in prep or club programs, but they did not stick to the comfort of their own groups.

“They made a conscious effort to not sit with each other at meals and little things like that to make sure that they were getting to know everybody right away,” said Lachapelle.

“The one thing you always hope for is your team to make sure they're bonding well together as a group and the other thing is to improve,” she added. “We felt like we made progress every single day, and now they get to walk away with a bronze medal, which we're really grateful for. It is a great accomplishment. But the memories that they're going to have from these two weeks are just going to be something that they can have forever.”

For many of the skaters, this was their first major international competition and their first opportunity to represent their country at that level. There were setbacks, but being able to lean on and count on each other helped them push through and end the tournament with a win.

“We just had to lean into each other and lean into our coaches,” said team captain Joy Dunne. “It’s not the outcome we wanted, but we still knew we wanted [the bronze medal], so we worked to the best of our ability and we knew we needed to have a team-first mindset to be able to do that. It takes a team. It takes all of us to buy in and do it. We did that today and we showed our character today after that loss.”

The players on this team were bonded together and the relationship was cemented through adversity. Their closeness will help them to be able to process the loss, but also to learn and grow from it.

Defender Molly Jordan (Berlin, Conn.), who was named to the Media All-Star Team, knows her time with the U18 team has come to an end. This exact roster of players is unlikely to play together ever again, but she said the shared experience of battling through and earning bronze is something that will motivate them all through the rest of their careers.

“On a big stage like this, it’s easy to not play as a team and that’s a lesson we learned, [to always play as a team],” she said. “Those are lessons we’ll take as we grow older. I think we have a lot to work for. We have a bright future with this program and I’m excited to see what’s coming next.”

It was a tough way to learn the lesson, falling short of their gold medal goal after a narrow 2-1 loss to Sweden in the semis, but Dunne knows that she and her teammates will be better in the future for what they went through in Östersund. Sometimes it takes a tough loss for the lesson to really sink in.

“This tournament has really taught us about a team-first mentality,” Dunne said. “I think that’s really what we focused on, and I think we came out where we did because of it.”

Every team arrived on site for the tournament wanting to win it all. The two semifinal games were some of the most competitive matchups the tournament has ever seen, which signals another important step of the growth of women’s hockey, particularly at the U18 level.

Team USA wishes it wasn’t at their expense, but Lachapelle knows that women’s hockey will be better for it.