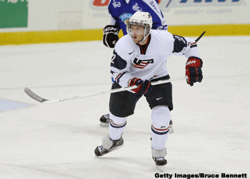 Noesen, who plays for the Plymouth Whalers of the Ontario Hockey League, was suspended for 10 games by the OHL for a hit in a game on Dec. 8. The IIHF recognizes suspensions from certified leagues in member federations and because there will be seven games remaining in Noesen’s suspension prior to the start of the IIHF World Junior Championship, Noesen will not be eligible for participate in the tournament.

“While we respect the IIHF’s decision, we don’t feel the process is equitable,” said Dave Ogrean, executive director of USA Hockey. “Moving forward, we’ll work with the IIHF and other federations to address the situation.”

The IIHF World Junior Championship features the top men's ice hockey players in the world under the age of 20 and is one of the top events on the world hockey calendar each year. Participating nations include Canada, Czech Republic, Finland, Germany, Latvia, Russia, Slovakia, Sweden, Switzerland and the United States.

The U.S. has earned a medal in two of the last three IIHF World Junior Championships, including gold in 2010 and bronze in 2011.