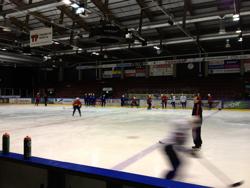 Phil Housley puts his team through a practice in Finland following the long flight.

From Tarrytown, N.Y., the team packed up its gear for an afternoon flight from John F. Kennedy Airport to Helsinki, Finland. The seven-hour flight arrived in Helsinki around 9 a.m. local time on Wednesday (note: Finland is seven hours ahead of eastern time).

Shoot Low Boys
The team experienced some travel difficulties upon landing in Helsinki. Five players were missing some or all of their equipment, including goalies John Gibson and Jon Gillies. Technically, Gibson did have his leg pads. Additionally, defensemen Matt Grzecyk and Connor Murphy, plus forward Cole Bardreau were without their gear and could not skate in the evening practice. All equipment is expected to arrive in time for today’s pre-game skate with the evening contest vs. Sweden. Bardreau and Murphy did their best to stay with their teammates, carrying exercise bikes from the locker room area out to the benches so they could watch practice while they loosened up their legs from the long flight.

Team USA did manage to pick up an extra goalie for practice. Toni Tammi of the local Mestis team, Kiekko-Vantaa, was more than happy to pull on a USA practice jersey and take a few extra shots.

Hockey 101
The wealth of hockey knowledge on the U.S. National Junior Team coaching staff is an invaluable asset to this year’s team. Head coach Phil Housley and assistant coaches Mark Osiecki, Grant Potulny and David Lassonde offer a great variety of experiences at the international, collegiate, junior and high school levels, as do video coordinator Dan Muse and director of player personnel Tim Taylor. In a single bus ride a new drill was conceptualized, sketched out on an iPad, reworked and then utilized in a practice minutes later. Just as impressive is the staff’s grasp on technology in improving its efficiency. While many coaches still use dry-erase boards, the Team USA staff was utilizing new technology to “draw” up new drills and save their work digitally to the USA Hockey Mobile Coach app, which debuted just a few months ago. Download the Mobile Coach

Practice Makes Perfect
Team USA had a short one-hour practice at Vantaa Valtti Arena on Wednesday night to get the players on an Olympic-sized sheet for the first time since August. Coach Housley was pleased with the skate:

“I think it was great. It’s understandable flying eight hours that practice was going to start out slow. But as practice moved on I thought we accomplished what we needed to get done, which was mainly getting them out to get a good sweat going and work on a few things.”

Looking Ahead to Sweden
Less than 36 hours after landing in Helsinki, Team USA takes on Sweden, the defending gold medalist from the IIHF World Junior Championship. With only two pre-tournament games on the schedule, Coach Housley has a plan for how he’ll use the games to evaluate the team: