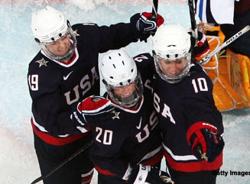 Darwitz scored once and added two assists as the U.S. topped Finland 6-0 to finish group play unbeaten — and largely untested — at the UBC Thunderbird Arena.

Darwitz is now at 11 points (four goals, seven assists) through three games, taking the U.S. women’s mark for most points in an Olympic hockey tournament set by the pioneer Granato, who notched 10 in 2002.

Next up for Darwitz and the Americans is the medal round, beginning Monday against Sweden in the semifinals. Records are great, Darwitz says, but these next two games will define her tournament more than any statistic.

“There’s one thing I want around my neck,” said Darwitz, who owns Olympic silver and bronze, but no gold. “That would break any record for me.”

Granato captained the first U.S. Olympic women’s hockey team to gold in Nagano in 1998. Darwitz was named this year’s captain in January.

That white “C” on her blue jersey stood out against Finland.

Not only did Darwitz help hammer the Finns with the last of four first-period goals for the U.S., but she also contributed those often-overlooked little things.

Like in the second period, when she assisted on Hilary Knight’s first career Olympic goal. Darwitz waited for Knight to come on during a line change and weaved a cross-ice pass to the rookie for the score.

As Knight celebrated, it was Darwitz who scooped up the puck and brought the souvenir to the bench for safekeeping.

Darwitz, a captain in tune with her teammates, realized how much it meant.

“I knew [Knight] has been pressing the last couple games to get that first one under her belt,” she said. “I think she got a little monkey off her back.”

She’s also an assistant coach at her alma mater, the University of Minnesota. One of her pupils there is, fittingly, the Finnish goalkeeper she beat with a deflection for that first-period goal.

For all that Darwitz has accomplished, she has admittedly failed in her sport as well. Take the 2006 Turin Olympics, when she and four teammates failed to score in a semifinal shootout against Sweden.

Her shot clanked off the crossbar. She’ll take that memory into Monday’s Olympic rematch.

“I wouldn’t say revenge, but it will be a motivating factor,” Darwitz said. “It will be a learning lesson. We’re in the same situation as [2006], it’s like déjà vu. We’re facing Sweden in the semis to go to the gold-medal game. We obviously don’t want it to repeat by any means. We’re going to take the lessons we learned from ’06 and bring them into the game on Monday.”

And what lessons are those, oh captain?

“Our mind was already on the gold-medal game [in 2006],” she said. “We weren’t on the ice in the moment. It’s going to be important for us to focus on Sweden only.”

The Americans slightly let up against Finland, Darwitz said.

Specifically, a less-than-enthusiastic second-period effort when she looked up at the scoreboard late in the frame and saw just four or five shots in the U.S. column. They finished with seven in the second.

“I think, at times, our intensity kind of backed off,” Darwitz said. “We’re going to need that for 60 minutes if we get past Sweden and hopefully get in the gold-medal game and face you know who.”