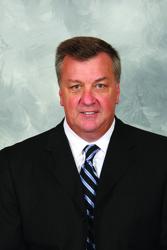 “It’s great to have someone with Don’s experience assisting us with two of our most prominent programs,” said Jim Johannson, assistant executive director of USA Hockey. “Don’s primary role will be centered around player identification, but he’ll also be engaged with our staff at the NDTP to assist in continuing to enhance our efforts in all areas.”

Waddell served as the general manager for the U.S. Olympic Men’s Ice Hockey Team that competed at the 2006 Olympic Winter Games in Torino, Italy, as well as the U.S. Men’s National Team that played in the 2005 International Ice Hockey Federation Men’s World Championship.

In addition, Waddell was the assistant general manager for the 2004 World Cup of Hockey team and held the same position for the U.S. Men’s National Team that captured the bronze medal at the 2004 IIHF Men’s World Championship in the Czech Republic, a feat that qualified the United States for the 2006 Olympic Winter Games.

As a player, he helped the 1983 U.S. Men’s National Team to the IIHF Pool B World Championship in Tokyo, Japan, and was a member of the first two U.S. National Junior Teams (1977, 1978) that competed at the IIHF World Junior Championship.

In addition to his USA Hockey duties, Waddell will continue to serve as a pro scout for the National Hockey League’s Pittsburgh Penguins for the third straight season.

Waddell spent 13 years with the NHL’s Atlanta Thrashers, serving as the only general manager in club history from 1998-2011. He also took on president duties for the team during the 2010-11 season. On two occasions he took over as interim head coach of the Thrashers.

Prior to joining Atlanta, Waddell, a Detroit native, served as assistant general manager for the Stanley Cup champion Detroit Red Wings in 1997-98.