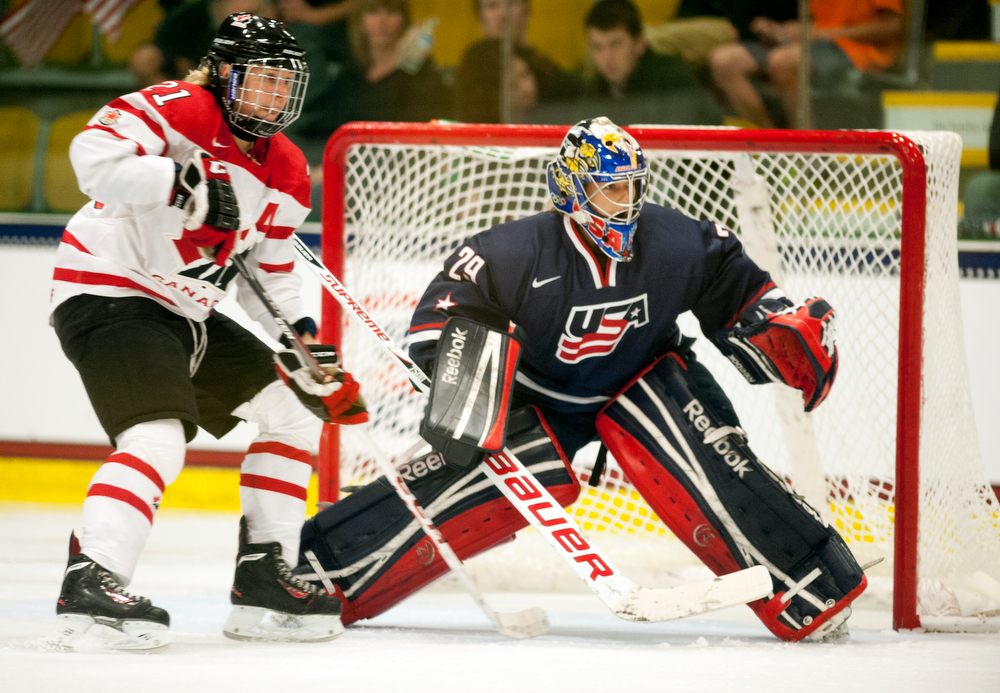 "We came on as the game went on, but we want to start faster," said Katey Stone, head coach of the 2014 U.S. Olympic Women's Ice Hockey Team. "You can learn a lot in a loss, and you can learn a lot in a win. We just have to keep building and working hard. There are definitely positives you can take from a game like this, and the kids got the opportunity to play in a great building on a great stage."

Canada jumped out to a 3-0 lead with two goals in the second period and one early in the third before the U.S. rallied in an effort to tie the score.

Decker put Team USA on the board at 11:05 of the final period when she batted a rebound in after a scramble at the edge of the crease. With Team USA on the power play, Meghan Duggan (Danvers, Mass./University of Wisconsin) and Alex Carpenter (North Reading, Mass./Boston College) created traffic in front of Canada goaltender Shannon Szabados and worked the puck to Decker at the side of the net. Her first attempt was stopped but she managed to get her stick on the rebound to cut the lead to 3-1.

Three minutes later, Marvin cut to the net and beat Szabados through the five-hole to bring the U.S. within one. After a quick breakout pass by Monique Lamoureux (Grand Forks, N.D./University of North Dakota) started a two-on-one, Jocelyne Lamoureux (Grand Forks, N.D./University of North Dakota) made a perfect pass to Marvin streaking down the middle of the ice and Marvin converted on the semi-breakaway.

The late bid to knot the score fell just short as several quality U.S. chances were stopped by Szabados in the closing minutes of the game.

Team Canada's Caroline Ouellette opened the scoring 4:16 into the middle period when she was able to get a stick on a Jayna Hefford centering pass and direct it just past McLaughlin's right leg. Then, 90 seconds later, Bailey Bram scored to increase Canada's lead to 2-0.

Tara Watchorn recorded the eventual game-winning goal early in the third period on a power play before Team USA started its comeback attempt.

The U.S. will play Canada on Thursday (Oct. 17) in Montreal, Quebec, before resuming the Bring on the World Tour at the Four Nations Cup, held Nov. 5-9 in Lake Placid, N.Y. For ticket information, click here.

For a complete box score from tonight's game, click here.

Notes: For more information on the Bring on the World Tour, including ticket information for Tour events and the entire Tour schedule, click here ... The U.S. Women’s National Team is training together at The Edge Sports Center in Bedford. Mass., and participating in the Tour and various competitions in the build-up to the 2014 Olympic Winter Games ... The final 2014 U.S. Olympic Women’s Ice Hockey Team, which will include 18 forwards/defensemen and three goaltenders, will be announced during the second intermission of the NHL Winter Classic on Jan. 1, 2014, in Ann Arbor, Mich., live on NBC ... Follow the U.S. Women's National Team throughout its journey to Sochi by following @USAHockey on Twitter or by liking U.S. Women's National Hockey Team on Facebook.