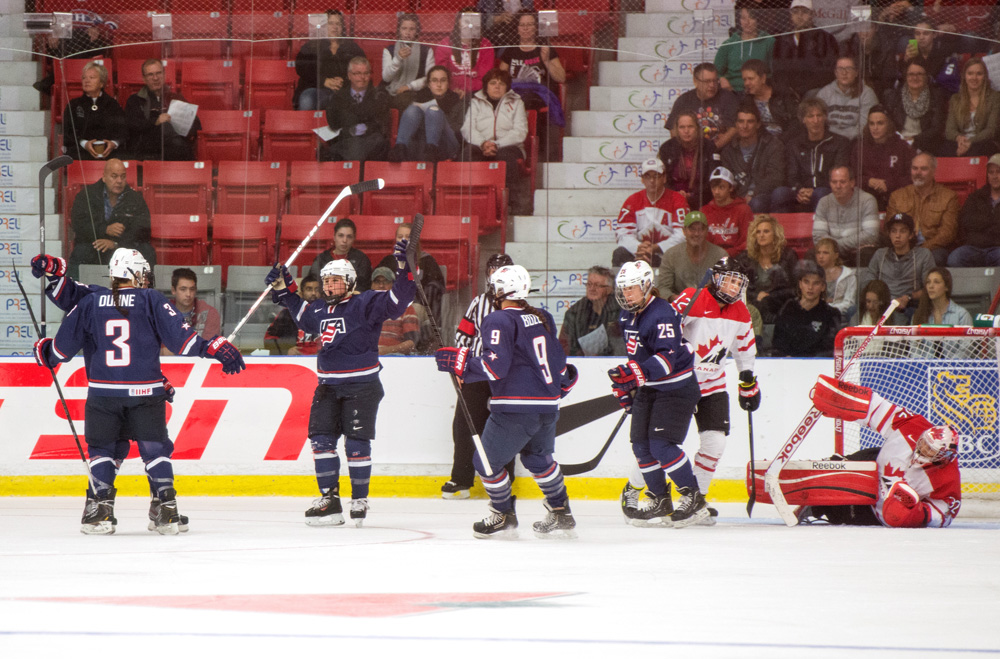 "We didn't excecute the way we needed to but we'll build off this game and learn from it," said Katey Stone, head coach of the 2014 U.S. Olympic Women's Ice Hockey Team. "We're going to ask a lot more out of our players and we're going to get a lot more."

Canada jumped out to a 2-0 lead with a pair of goals within 54 seconds during the opening period. Rebecca Johnston opened the scoring at 8:59, tucking a rebound past Vetter. Hayley Wickenheiser added a shorthanded tally at 9:53 after skating into the zone and using the defenseman as a screen to fire a shot past Vetter's blocker.

The U.S. answered back, making it 2-1 just 37 seconds later. With Team USA on the power play, Decker put the U.S. on the board at 10:32 when she batted in a rebound past Canadian goaltender Charline Labonte off a shot from the left point by Jincy Dunne (O'Fallon, Mo.).

At 18:38, Wickenheiser notched her second goal of the game during a five-on-three power play to make it 3-1 Canada going into the first intermisison.

Schaus replaced Vetter to start the second period and allowed a goal by Johnston, her second of the game, at 0:58 when an errant pass from goal line redirected off Dunne's skate to make it 4-1. Caroline Ouellette gave Canada a 5-1 lead, scoring a shorthanded goal at 12:15. She outworked a U.S. defender, took the puck to the net and managed to slide it between Schaus' legs.

The U.S. responded at 19:00, making it 5-2 on the power play, when Coyne cycled the puck behind the net to Lamoureux who then scored on a wraparound and that's how it remained after two periods.

Coyne made it 5-3 at 15:19 of the third period, when a blocked shot came to Coyne in front of the net and she spun around and fired it past Labonte.

Canada added a late goal to make it 6-3 and close the scoring.

The U.S. will resume the Bring on the World Tour at the Four Nations Cup, held Nov. 5-9 in Lake Placid, N.Y.