Now that Lisa Chesson and the U.S. Women's National Team have had a week to recharge during the Thanksgiving break, they are fired up for the home stretch on the road to the Sochi and the 2014 Olympic Winter Games in February.

“Its just a week, but it’s plenty to rest up,” Chesson, who won a silver medal at the 2010 Winter Games, said going into the holiday break. “It’s so important. Family to our whole team is important. It’s a refresher just to be able to go home and see family and friends. Sometimes less is more, and to have the rest helps a lot.”

Last week the defenseman traveled to her native Plainfield, Ill., which is about 45 minutes southwest of Chicago. She said she was going to have a small Thanksgiving dinner with her parents and her brother’s family.

After indulging in all those Thanksgiving treats, she said it wouldn't take too long to work off that turkey hangover.

“We’re so used to being on the go that I’m sure that first couple minutes of practice we’ll be trying to feel everything out,” she said, “but to have the rest, if you are feeling tired or sore, is great. We will feel very rested, ready to go and excited to get back on the ice.”

The team, which is training in Bedford, Mass. all the way up until the Winter Games, can’t afford to take any time to get back into the swing of things. The squad played consecutive scrimmages coming up this weekend against the Boston Advantage — first on Friday in Salem, N.H. and the following night in Andover, Mass. Then the U.S. has four more games against rival Canada between Dec. 12-30.

So far Team USA is 0-3 against Canada in its Bring on the World Tour. But Chesson said the U.S. players are ready to take on Canada again.

“We've been playing really well the last few weeks and want to keep that momentum going, so it will be great to really test it out against them,” she said, noting that they have yet to put together a full 60 minutes of hockey against Canada. “We came out a little slow in those games but picked it up toward the end. If we just put together 60 minutes we’ll be in good shape.”

Another date with destiny is bearing down on Team USA: The team will be cut down from 25 players to 21 players at some point later this month.

“It’s sad to see people go,” Chesson said. “If you are a person to go, you know you are part of team moving forward. I don’t want to say its easy moving on, but you know you’ve done your part to put the team in the best situation.”

Chesson said after cuts were made before the Vancouver Games it took the team a few days to shake off the fact that their friends didn’t make the team.

“It’s bittersweet because you just made the Olympic team, but at the same time you see your great friends that are no longer with you,” she said. “It’s definitely tough. Nobody wants to go through it but, unfortunately, it’s part of it.”

In the last Winter Games, Chesson was one of the youngest players on the team. After taking time away from the national team to finish school at Ohio State University, Chesson came back and found herself as one of the veterans, since several older players had retired.

Now at 27 years old, Chesson is one of the older players vying for a spot on the final roster. She said the biggest piece of knowledge she can pass along to the younger players is to try to relax.

“You kind of know what to do at that point in your career,” she said. “I’m just trying to brush that off on younger players: ‘Yeah this is a huge deal, but at the same time be comfortable in what you are doing to get better. The coaches might want something else out of you, so you have to tweak your game a little bit; you have to be mentally ready.’”

She said the biggest thing the veterans from the 2010 Games taught her was how to play with a sense of urgency.

“I think if you go in with the approach that you never know when your last hockey game will be, so lay it all out on the line, you kind of put yourself in good shape and a good position,” she said. “The veterans are awesome about putting the younger players in good shape.”

And that will be the same approach the entire team will take at the 2014 Sochi Games as well, she said.

“That’s our main goal in Sochi,” she said winning the gold medal. “But we just have to play our game, play that 60 minutes and get past the first, second and third round games and go forward from there.

“It’s day-to-day. Obviously [playing Canada in the gold-medal game], that’s what we want, but looking back to the Four Nations Cup anything can happen. So that’s where we have to play the first game and go from there and just prepare for every game like it could be our last.” 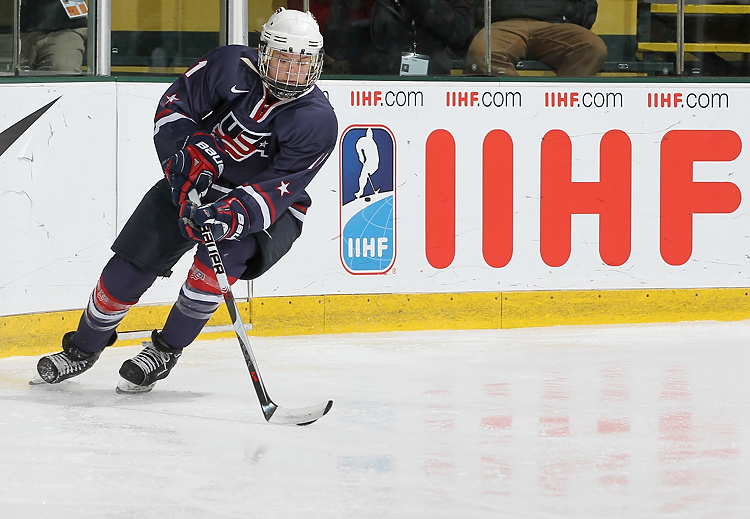