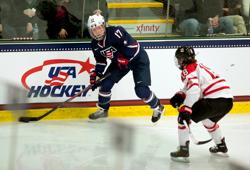 Grand Forks, N.D. - No matter where they travel on the road to Sochi, the Lamoureux sisters are often the focus of attention with fans and members of the local media. Multiply that by 10 for tonight’s pre-Olympic exhibition game between Canada and the U.S. Women’s National Team.

More than 5,000 North Dakota hockey fans are expected to turn out to watch two of Grand Forks’ own skate for what will likely be the last time the Lamoureux sisters hit the ice at the palatial Ralph Engelstad Arena.

“To be able come back and especially to play with the U.S. National Team is really special for Joce and I,” said Monique Lamoureux, who along with her twin sister Jocelyne are not only homegrown products of the local youth hockey scene but have returned home to skate for the University of North Dakota.

“This place really holds a special spot in our hearts, especially with our dad and brothers playing here and us playing here too. So to have one more game in front of the home crowd it really means the world to us and we’re really excited about tonight’s game.”

In the days leading up to the game, which is one of two pre-Olympic exhibition games on the Bring On The World Tour schedule, the twins canvased their teammates in hopes of gathering extra tickets for family and friends.

Even the rest of the U.S. squad is anxious to see the reception the sisters receive when they skate out on the ice at REA for the last time.

“I imagine there will be tremendous energy tonight. It’s going to be electric for the Lams and really awesome for them to be able to come back here and play in front their hometown crowd,” said head coach Katey Stone.

“This is a big hockey town and so there are going to be some educated fans in the stands and they’re going to get to see a great hockey game and I imagine it will once again be another spirited rivalry between us and Canada.”

Among those who will be in attendance will be the twins’ mom and dad, Linda and Pierre, along with their brother Jacques, a graduate of the U.S. Air Force Academy who recently returned from a Middle East deployment.

The trip home could not have come at a better time for the Lamoureuxs. After spending much of the fall in a residency camp outside of Boston, the sisters can use a break before wrapping up the exhibition schedule with games in St. Paul, Minn., on Dec. 28 and Toronto on Dec. 30 before heading to Ann Arbor, Mich., where the U.S. Women’s Olympic Team will be announced during the first intermission at the NHL Winter Classic.

“For Joce and I and for some of the girls from the Midwest it’s kind of a home-sweet-home kind of thing, and see people you’re familiar with is great, for me and my energy. It’s a good spot to be in and it feels right being here right now.”