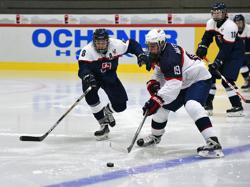 The United States Olympic Committee announced today the Best of April honors for the Team USA Awards presented by Dow, including the recognition of exceptional performances during the month of April by Auston Matthews (Scottsdale, Arizona) and the U.S. Women’s National Ice Hockey Team.

Matthews led the U.S. to the gold medal at the 2015 IIHF Under-18 Men’s World Championships, held April 16-26 in Lucerne and Zug, Switzerland. Serving as an alternate captain, Matthews led the tournament in points (15), tied for the event-high in goals (8), finished tied for second in plus/minus (+11) and tied for fourth in assists (7). For his performance, he earned the Directorate Award as the tournament’s best forward and was selected to the media all-star team.

The U.S. women claimed their second consecutive IIHF Women’s World Championship title with a 7-5 victory over Canada on April 4 in Malmo, Sweden. Team USA went undefeated in the tournament and outscored their opponents, 30-6. Leading up to the gold-medal game, the U.S. defeated Canada, 4-2, Finland, 4-1, and Russia twice, 9-2 and 13-1. The win marked Team USA’s fifth title in six years. For more info on the 2015 WWC victory, click here.

To learn more about the USOC, this month's winners and the voting process, visit TeamUSA.org.