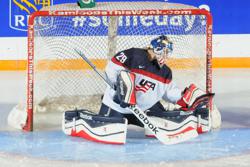 Looking to take the next step in an already accomplished career, the 2015-16 season is filled with excitement for U.S. Women’s National Team goaltender Brianne McLaughlin-Bittle. As one of the elite goaltenders in the U.S., she has been on the cusp of grabbing a larger role with Team USA and this year promises to be an important step in her continued development and advancement in the women’s program.

In addition to upcoming events like the Four Nations Cup, the two-time Olympian is bringing her talents to the National Women's Hockey League, which opens its inaugural season next month with teams in Boston, Buffalo, Connecticut and New York.

Living in Pittsburgh the last few years with her husband — Robert Morris associate head coach Logan Bittle — and their dog, playing pro hockey hasn’t been her best option for keeping her game sharp.

So McLaughlin-Bittle did most of her training around the national team schedule at the facility she runs, McLaughlin Gold Medal Goalie Training, and occasionally with the Robert Morris men’s team.

“I was doing what I could at home, and obviously running a training facility I had the opportunity to get in net and face some live shots,” she said. “But really, the only time I would ever face multiple shooters is if there was an injury at Robert Morris and I’d go over there and fill in for practice.

“It didn’t matter: the men’s team, the women’s team, if there was a spot and a chance to get on the ice I’d jump at it. Obviously I didn’t want their goalies to get hurt, but I’ll play.”

She’ll no longer have to worry about that.

McLaughlin-Bittle was the first free agent signing for the NWHL’s Buffalo Beauts, who will play their home games at the new HARBORCENTER. It’s about a three-hour drive from McLaughlin-Bittle’s home outside of Pittsburgh, which while still long is at least manageable.

“When I found out there was a team in Buffalo, that made me really excited,” she said. “To have the chance to play hockey, that’s what we all want. I think we’re seeing the women’s game growing, and it’s good to see more opportunities like this out there.”

Post-collegiate players outside of the northeast — and in particular the Boston area — have had a difficult time finding opportunities to play hockey outside of national team camps and tournaments.

The NWHL is hoping to change that, and the Beauts had their first practice last week.

“The HARBORCENTER was unbelievable,” McLaughlin-Bittle said. “Everyone has been great so far. The community was really welcoming, and we’re all excited to get the season started.”

The community is perhaps the most important partner in establishing the new league, McLaughlin-Bittle said, adding that there were already talks of players meeting with youth organizations and finding other ways to get involved around town. That type of outreach has been a priority for the national team players since the past Olympic Winter Games.

“We want to reach out and be good role models for young girls playing hockey,” McLaughlin-Bittle said. “I know we had that growing up, looking up to the national team players, and this is a chance for us to do the same. Now, hopefully, these girls will continue to play the game and have opportunities even we didn’t have growing up.”

Women’s hockey is starting to boom. USA Hockey Director of Women’s Hockey Reagan Carey said that participation is up over 78,000, which is nearly six times what it was when the sport made its Olympic debut at the Nagano Games in 1998.

“It seems like every Olympics, there is a boom, and that’s really fun to see,” McLaughlin said. “I grew up in Cleveland, and I think I was the only girl playing. Then I moved to Pittsburgh around 2005 and it was kind of the same. Now it’s huge. Some of that is that the Penguins had some success in 2009 and hockey got huge here. Now there are full women’s organizations, so that’s fun to see. The more exposure we get on the women’s side, the better.

“Last Olympics, that was one of our goals, to help the sport grow. It’s really easier with social media now; we can make contact with players who have dreams of being on the national team. There’s a lot of things in the community we did and it’s fun, especially because we didn’t have those opportunities when we were kids.”

The 28-year old netminder aspires to help Team USA win the Four Nations Cup and IIHF Women’s World Championship in April, but will also be focused in between events on helping the Beauts win an Isobel Cup, the NWHL’s championship trophy.