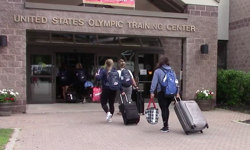 The first wave of over-18 players began arriving in Lake Placid on Saturday to take part in the USA Hockey Women’s National Festival that will run until August 14.

Upon arrival, players went directly to the rink and dropped off their gear in their assigned locker room and checked in with the equipment managers to make sure everything was in order for the week ahead.

Once things were to everyone’s liking, the players reported to the U.S. Olympic Training Center and got settled in to their dorms with their assigned roommates. After saying hello to their teammates, dropping their personal bags and getting situated, it was right to work.

Sunday’s schedule for the players was dedicated to medical testing (physicals, blood work, and impact tests), a variety of meetings, including USADA, and annual photography to capture headshots for the next quarter.

In addition, the under-18 players arrived and began a similar process.

Both groups hit the ice today for the opening of the on-ice portion of the camp. A full schedule is available here.

Team USA opens play against Switzerland at 2:30 p.m. on Thursday, May 6