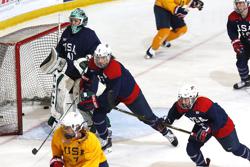 After the festival’s initial off-ice testing over the weekend, the players were excited to get on the ice. Of the 95 attendees, the 64 over-18 players and 31 under-18 players were broken up into multiple teams.

“The first day of camp is fun getting acclimated and getting testing completed, which is the hardest part before we hit the ice and the real fun begins,” said defenseman Megan Keller.

One thing that will be noticeably different than past years is a format change that involves a greater number of players, particularly at the over-18 level, allowing for flexibility in setting rosters and mixing various ages and levels of play to gauge the overall competition level and individual progress in a different way.

“USA Hockey is committed to providing the appropriate structure at these events and creating an environment that allows our players to grow and excel," said Reagan Carey, director of women’s hockey at USA Hockey. “We constantly evaluate everything we do and evolve in our methods as needed.”

The expansion of having four over-18 teams at the National Festival and the top 31 under-18 players speaks to the growth and depth of elite female players in the U.S. Having 25 post graduate players competing, we push the performance of our top level veterans while ensuring we maintain momentum in developing 39 of our younger core of over-18 players.

The coaching staff at each level of the the festival is integrated in a way that creates synergy within all levels of our program and reinforces the player habits and team values that are expected of the national team players.

The National Festival showcases the tremendous amount of great work our USA Hockey volunteers are doing at the affiliate and district levels to grow the skill level of our players and the sport overall.

Each player in camp will look to distinguish themselves this week and emerge onto future rosters and represent Team USA.