Inside the Glass: Broseker’s Unusual Journey to the 1996 World Cup Finale 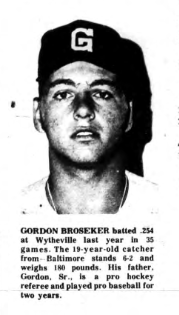 If it wasn’t for baseball and the Texas Rangers, Gordy Broseker might have been somewhere else on Sept. 14, 1996. Instead, he was on the ice in Montreal for the World Cup of Hockey finale between Canada and the United States.

It was anything but a direct route.

“People ask me how to become an NHL official and I tell them it’s simple. First, you fail an eye test, then you play baseball and you don’t like the contract they’re giving you, and then you go referee hockey,” said Broseker.

In truth, his path wasn’t quite that unconventional. But there were plenty of curves.

An avid youth hockey player in Baltimore, Broseker also played baseball, eventually starring for Northern High School. The Washington Senators selected the versatile hometown kid in Major League Baseball’s 1969 Amateur Draft, sending him on a four-season minor-league journey during which Broseker caught and pitched in addition to playing outfield and first base. He also hit, amassing a respectable .281 career batting average. The Senators moved to Texas before Broseker’s 1972 campaign, making him Rangers property, and after setting a career-high in home runs, he returned home to Maryland in the fall of 1972.

Coincidentally, the American Hockey League was expanding into the southeastern United States and struggling with a shortage of local officials. Needing an off-season gig, Broseker went to the league’s training camp for officials, where he was offered a limited schedule of one game a month.

“But I had like 12 games in the first month,” said Broseker. “I ended up working more than 90 games that winter as a part-timer in the AHL. At the same time, I had a contract squabble with baseball and I held out.”

The Rangers played hardball, but Broseker had leverage. Hockey was helping him pay the bills. Soon an invite to NHL training camp arrived and he eventually traded his spikes for skates, working his first NHL game in January 1975. His new career continued progressing, and in 1991, he worked his first Stanley Cup Final. Five years later, Broseker was in Europe, assigned to World Cup games in Helsinki, Stockholm and Prague.

“It was a completely different world over there,” he said. “The fans were really, really into it. The enthusiasm and the excitement, hours and hours before the game, was absolutely nuts. Those people were fired up. And after the game, when we walked out, there were people that actually knew who we were as officials and wanted us to sign autographs. I remember thinking, “Here’s a hockey fan in Prague who knows me. This is pretty cool.’”

But it was nothing compared to what awaited him in North America.

Assigned to be the standby official for Game 1 of the World Cup Final, Broseker was awestruck by the atmosphere in Philadelphia.

“Once we got to the finals, where it was Canada and the United States, it became something I had never seen. The Philadelphia hockey fans are nuts. They’re some of the best in the NHL.”

Broseker shifted from standby to linesman for Game 2 in Montreal, where the intensity climbed yet another notch.

“Before the game, I was standing next to the ice, where we entered the rink, and the fans were all fired up. I looked at (fellow linesman) Ray Scapinello and said, ‘This is controlled mayhem.’”

Team USA clawed even in the series with a 5-2 win. In the officials’ locker room afterward, Broseker, Scapinello and referee Kerry Fraser tried to recover.

“I remember sitting with the guys and saying, ‘Wow. That was unbelievable,’” said Broseker. “’What’s it going to be like in two days?’”

As it turned out, Game 3 would be unlike anything he had ever seen.

It was also the ultimate test for players and officials alike, with 21,273 passionate fans filling Molson Centre with frenetic energy.

Brett Hull scored first for Team USA, blasting a rocket past Curtis Joseph on a first-period power play. Unwavering Mike Richter kept Canada off the scoreboard until a mere six seconds remained in the second period, when Eric Lindros evened the score at 1-1. Adam Foote gave Canada its first lead at 12:50 of the third period and the partisan Canadian crowd could all but taste triumph. But the U.S. stormed back with four goals in the final four minutes – Hull, Tony Amonte, Derian Hatcher and Adam Deadmarsh – to vanquish Canada and claim the first ever World Cup of Hockey championship.

“For a visiting team to go into that kind of environment and do what they did was remarkable,” said Broseker.

“I was physically and mentally exhausted because there was so much going on,” said Broseker. “You were afraid that if you looked one way, you’d miss something else. But that one stands out as probably the highlight of my 30-year officiating career.”

And to think, it might have never happened without a lowball offer from the Texas Rangers in 1973.

Event will begin July 24 at USA Hockey in Plymouth, Mich.