“That was an exciting game to be a part of and I’m real proud of these guys for the effort they gave,” said Bob Motzko (St. Cloud, Minn./St. Cloud State University), head coach of the 2017 U.S. National Junior Team. “It was a quick turnaround from yesterday, but the guys in this locker room continue to rise to every challenge that comes their way. We’ve got a chance to win our group on Saturday and position ourselves nicely for the quarterfinal and I know we’ll be ready.”

Team USA (3-0-0-0) can clinch first place in Group B with a victory in its final preliminary-round game against Canada on Saturday (Dec. 31). Puck drop is slated for 3:30 p.m. ET and will be televised live on NHL Network

Keller opened the scoring for the U.S. 4:14 into play. Casey Fitzgerald (North Reading, Mass./Boston College) fed a cross-ice pass to the left faceoff dot for Keller, who deked around a defender and slid a backhand shot past goaltender Ilya Samsonov for the score.

Russia evened the game with 8:01 left in the first period on a shorthanded tally by Kirill Urajov on a two-on-one rush. Despite a number of chances in the second half of the frame and outshooting the Russians 18-6, the teams entered the first intermission tied.

The U.S. regained the lead 4:03 into the second stanza on a power-play goal by Colin White (Hanover, Mass./Boston College) when he put home a rebound off a shot from the point by Charlie McAvoy (Long Beach, N.Y./Boston University).

Troy Terry (Highlands Ranch, Colo./University of Denver) gave Team USA a two-goal advantage at 11:41 of the middle frame. Erik Foley (Mansfield, Mass./Providence College) carried the puck into the corner before delivering a centering pass for Terry, who deflected it past Samsonov for his second goal in as many games.

Russia cut the U.S. lead in half when Kirill Kaprizov tipped a shot past Parsons on the power play with 2:43 left in the second period.

Tage Thompson (Orange, Conn./University of Connecticut) was awarded a penalty shot with 1:29 remaining after it was ruled that Russia deliberately dislodged the net, but his attempt was poke checked away by Samonov to keep it a one-goal game.

Parsons finished with 10 saves in the final period, including a pair of sprawling stops on a Russian power play midway through the frame, to preserve the 3-2 victory for the United States and earn his second victory of the tournament.

NOTES: Troy Terry was named U.S. Player of the Game … Team USA outshot Russia, 37-27 while finishing 1-for-5 on the power play and 2-for-3 on the penalty kill ... For full game stats, click here ... With the win, the U.S. clinched a spot in the quarterfinals ... The U.S. snapped a five-game losing streak to Russia in tournament play ... At the 2017 IIHF World Junior Championship, the U.S. is competing in Group B alongside Canada, Latvia, Russia and Slovakia. All U.S. games will be broadcast live on NHL Network ... For complete coverage of Team USA at the 2017 IIHF World Junior Championship, click here …  Use the hashtag #USAWJC on Twitter to join the conversation about the 2017 U.S. National Junior Team.

THE SERIES VS. RUSSIA
The United States faced Russia in last year’s IIHF World Junior Championship in Helsinki, Finland, where Russia edged Team USA, 2-1, in semifinal play. Team USA trails the all-time series by a 5-0-0-12-0 (W-OTW-OTL-L) count, but is tied with five wins apiece in group stage play. The U.S., which has lost to Russia in its five most recent meetings, last defeated Russia on Dec. 29, 2007, in a 3-2 preliminary-round victory at the 2008 IIHF World Junior Championship. For the series history, click here.

Last Game Dec. 28: USA 5, SVK 2
Yesterday, five different players scored, 12 players in total tallied points and Joseph Woll made 18 saves. Jack Roslovic was named the U.S. Player of the Game after he registered two assists. His two points tied Joe Cecconi (0-2--2) for the team lead as Caleb Jones led the U.S. with 20:09 time on ice. Team USA outshot Slovakia, 50-20, was 1-for-5 on the power play and 1-for-2 on the penalty kill.

TEAM USA STAT RANKINGS
Through two games, the United States  is tied for first in fewest goals against (3); second in goals scored (11); third in both penalty kill (85%) and save percentage (.906); and fourth in power play efficiency (25%).
Among players, Clayton Keller (St. Louis, Mo./Boston University) leads the tournament with a perfect 100% (9-9) faceoff percentage, while Luke Kunin (Chesterfield, Mo./University of Wisconsin) and Tanner Laczynski (Shorewood, Ill./Ohio State University) are fourth (75.6%) and fifth (75%) respectively. Keller is also tied with Colin White (Hanover, Mass./Boston College) for third in goals scored with two each.

“We said it from day one in Buffalo that we felt we had four lines that could score,” said head coach Bob Motzko. “We believe in the guys in this room and know they’re all capable of scoring. The players know that, too, which I think keeps someone from squeezing their stick thinking they need to be ‘the guy’. Anybody in there can be ‘the guy’ and that’s what we feel makes us a difficult team to face throughout this tournament. 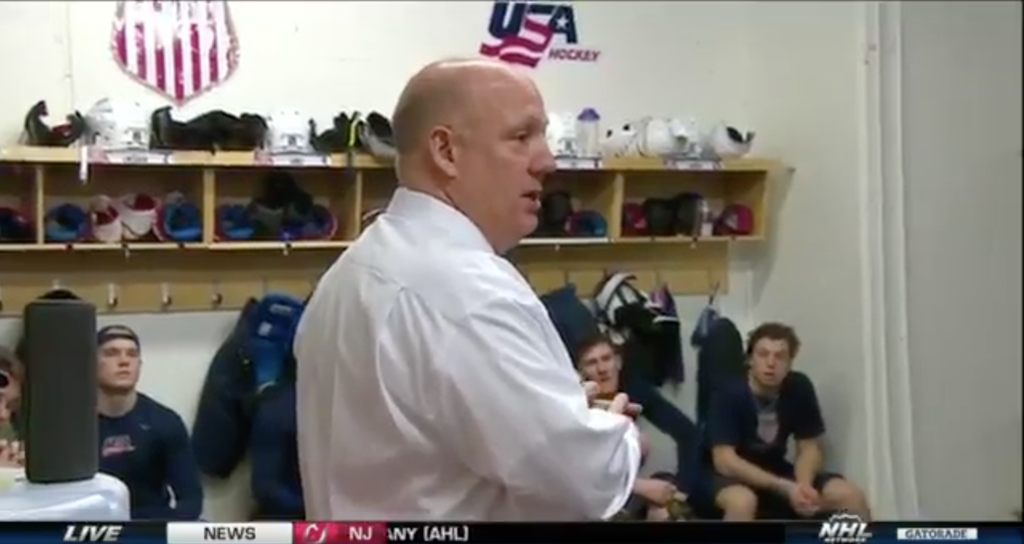