A week ago, the U.S. National Junior Team claimed its fourth gold medal at the IIHF World Junior Championship with a 5-4 shootout victory over Canada. The victory culminated a complete team effort that included numerous player and team accolades.

"There was something special about this group of guys," said head coach Bob Motzko (St. Cloud, Minn./St. Cloud State University). "Just great camaraderie and then they showed heart as battlers to come through this tournament and not lose a hockey game."

The tournament began with Team USA's tenth straight tournament-opening victory when it beat Latvia, 6-1. After back-to-back victories over Slovakia, 5-2, and Russia, 3-2, the U.S. topped Canada, 3-1, to claim its preliminary round group for the first time since 2011 and third time in the last 10 IIHF World Junior Championships. Team USA also finished atop its group in 2008.

After edging Switzerland, 3-2, in the quarterfinals, the U.S. met Russia in the semifinals for the second straight World Junior Championship. There, Troy Terry (Highlands Ranch, Colo./University of Denver) scored three times in a seven-round shootout to lead the U.S. past Russia, 4-3, for the first time in eight playoff meetings and give Team USA its first gold-medal game appearance since 2013.

In the gold-medal game, the U.S. rallied from a pair of two-goal deficits to send the game to a 20-minute overtime period. After neither team scored, the game entered a five-round shootout where Tyler Parsons (Chesterfield, Mich./London Knights) stopped all five Canadian shooters and Terry, for the second straight night, tallied the game-winning shootout goal to give Team USA the 5-4 gold medal victory.

The U.S., which won all seven games for the first time in tournament history, led the tournament in power play efficiency (31.03%), tied for second in most goals scored (29) and ranked third in fewest goals allowed (15). Forward Clayton Keller (St. Louis, Mo./Boston University) led the U.S. in scoring with 11 points (3-8) that put him third among all tournament skaters while his eight assists ranked second. Forward and alternate captain Colin White (Hanover, Mass./Boston College) registered a team-high seven goals, including the game-tying goal in the gold-medal game, that ranked second among all skaters. In addition, Parsons registered a tournament-high five wins in his international debut.

All three U.S. players saw their performances rank among the best in U.S. history.

In addition, Parsons ranks top 10 on both the all-time wins list and all-time goals-against-average among U.S. goaltenders in World Junior Championship play. While his five wins ranks sixth along with John Gibson (2012-13), Jeff Frazee (2006-07) and Alan Perry (1984-86), his 2.18 goals against average is the eighth best performance by a U.S. goaltender in World Junior Championship.

MEDIA ALL-STAR SELECTIONS
Charlie McAvoy (Long Beach, N.Y./Boston University), along with Keller, were both named to the Tournament's Media All-Star Team. McAvoy was the U.S. Player of the Game in the gold-medal game after tallying a goal and an assist.

TOP 3 U.S. PLAYERS OF THE TOURNAMENT
Jordan Greenway (Canton, N.Y./Boston University), Keller and White were named Team USA's Top Three Players of the tournament. Greenway, whose eight points (3-5) tied White for second-best on Team USA, was named the U.S. Player of the Game in Team USA's tournament-opening victory over Latvia.

BACK-TO-BACK MEDALS AGAIN
The victory gave Team USA its tenth all-time medal in the event and marked the second time that the U.S. has won back-to-back medals at the World Juniors level after a bronze medal finish at the 2016 event in Helsinki, Finland. 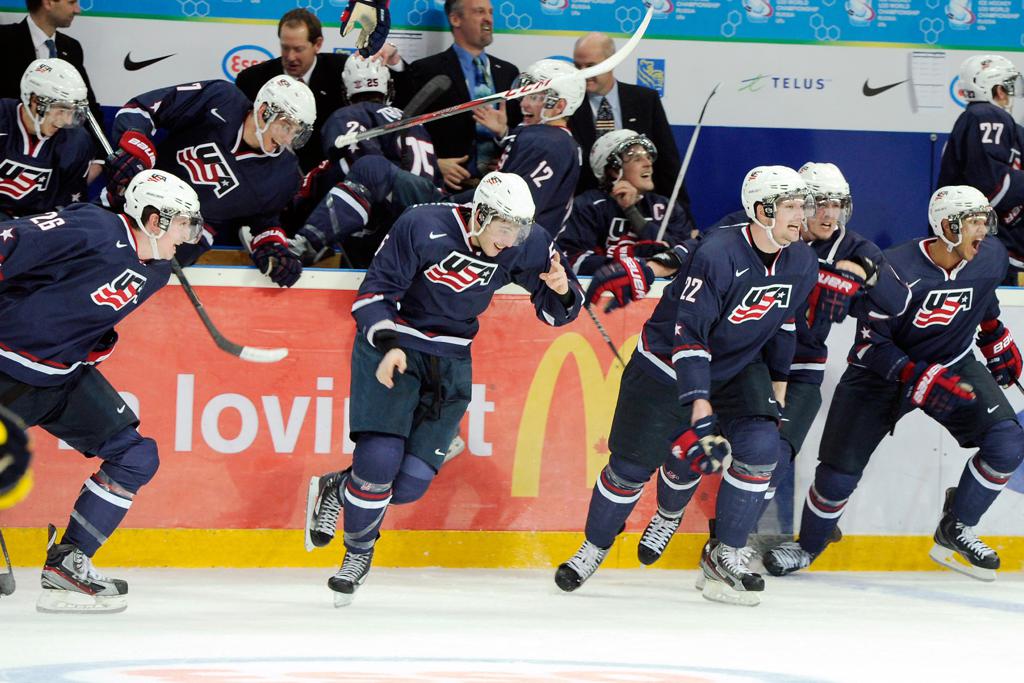 GAMEDAY: U.S. to Face Canada in My Why Tour Tilt in Hartford