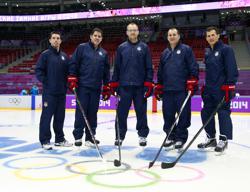 Tony Granato (far right) served as an assistant coach for the United States at the 2014 Sochi Winter Olympics.

For years, Tony Granato had thought about coaching hockey with his brother, Don, and longtime friend Mark Osiecki.

On fishing trips, the three would talk hockey X’s and O’s. They’d think about how great it would be to all be on a coaching staff together. All three have ties to the University of Wisconsin as former players, and they watched from afar as the Badgers struggled over the past two seasons.

After winning just eight games in 2015-16 — and just four games one year earlier — Wisconsin fired long-time head coach Mike Eaves. In stepped Tony Granato as the new bench boss, with his brother and Osiecki by his side as assistants. 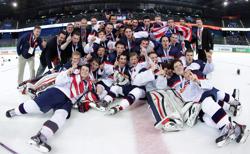 Don Granato (fourth from left, back row) coached the 2015 U.S. National Under-18 Team to its ninth gold medal from the IIHF Under-18 World Championship.

The task of revitalizing the struggling program wasn’t an easy one, but the trio was up for the challenge.

“The three of us, we’ve talked Badger hockey and we follow the program,” said Tony Granato. “It was always a big part of us because it gave us the opportunity to move on and do things after we left here.”

All three had previous head coaching experience: Tony with the Colorado Avalanche in the NHL, Don with the USA Hockey National Team Development Program, and Osiecki with Ohio State and the USHL’s Green Bay Gamblers. Each had their own playing experience to draw from as well. 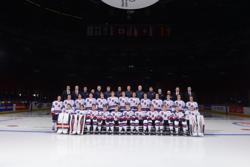 Osiecki (back row center) and Don Granato (one to left) coached together at the 2015 IIHF World Junior Championship.

What they also each had was a desire to see their alma mater return to being a force in college hockey.

“I think for all of us, it was about first and foremost reconnecting with the community and alumni,” said Osiecki, who had previously coached the United States in the IIHF World Junior Championship. “We spent numerous hours and a lot of letter writing sending things out to alumni and reaching out to the community.”

The coaching staff saw the potential in the roster they inherited. Granato insists the team’s recent four-win and eight-win seasons weren’t indicative of how good those teams actually were.

Part of helping Wisconsin turn the corner was getting the players on the roster to play with confidence. That’s not always easy to do after starting a season 0-8 — like the Badgers did in 2014-15 — or winning just three conference games, as Wisconsin did a year ago.

Losing was something Badgers senior captain Grant Besse wasn’t used to. During his four years of high school hockey, Besse’s Benilde-St. Margaret’s team was a perennial power. The Red Knights won the state championship in Minnesota his senior year.

So after a strong first season at the University of Wisconsin that saw the Badgers go 24-11-2 overall, Besse wasn’t ready for what was about to happen the next two years.

“Being on a team that wasn’t very successful at all, I think just having the attitude of wanting to be there every day, obviously when you’re winning it’s a lot easier to come to the rink and have fun,” Besse said. “You question whether you’re doing stuff right or what you should be doing or what you could be doing better.”

Thanks to a new coaching staff and a new outlook in the locker room, Wisconsin hockey appears back on track. Following a sweep over Michigan this past weekend, the Badgers are now 17-10-1 overall — five more wins than the last two years combined — and are hanging with the top teams in the Big Ten.

Though Wisconsin’s one-year turnaround may have surprised many on the outside, those in the program knew it was a possibility.

“I don’t think it was a surprise — not to us,” Osiecki said. “We believed in those kids.”

The improved product is gaining attention on campus. Wisconsin is averaging around 1,000 more fans per game at the Kohl Center in Madison this year compared to last season. The players have noticed a bit more buzz among students.

That’s in part due to Granato and his staff’s commitment to reconnect with the fan base, but winning also goes quite a long way in recapturing the interest.

“I think we’re heading in the right direction in a lot of different areas. The fans and the excitement and the buzz around town is back,” Granato said. “I think they like the product that they see because the kids, they’re an exciting team. We’re a fun team to watch. We’re certainly a fun team to coach and be around.”

Wisconsin is three points behind Minnesota for first place in the Big Ten, and those two teams face off in Minneapolis this weekend. Winning the conference would be a big step forward for a Badger team that just two years ago only won two games in the Big Ten.

Being part of the turnaround is a source of pride for the coaching staff and for the seniors — but they know there’s still work to be done.

“Obviously after the past few years, people haven’t seen Wisconsin as the perennial powerhouse that it usually is,” Besse said. “Coming into this year, not to say we’re a powerhouse, but we’re developing a new tradition here under coach Granato. To be a part of that first step in the right direction, it’s a pretty cool feeling.”