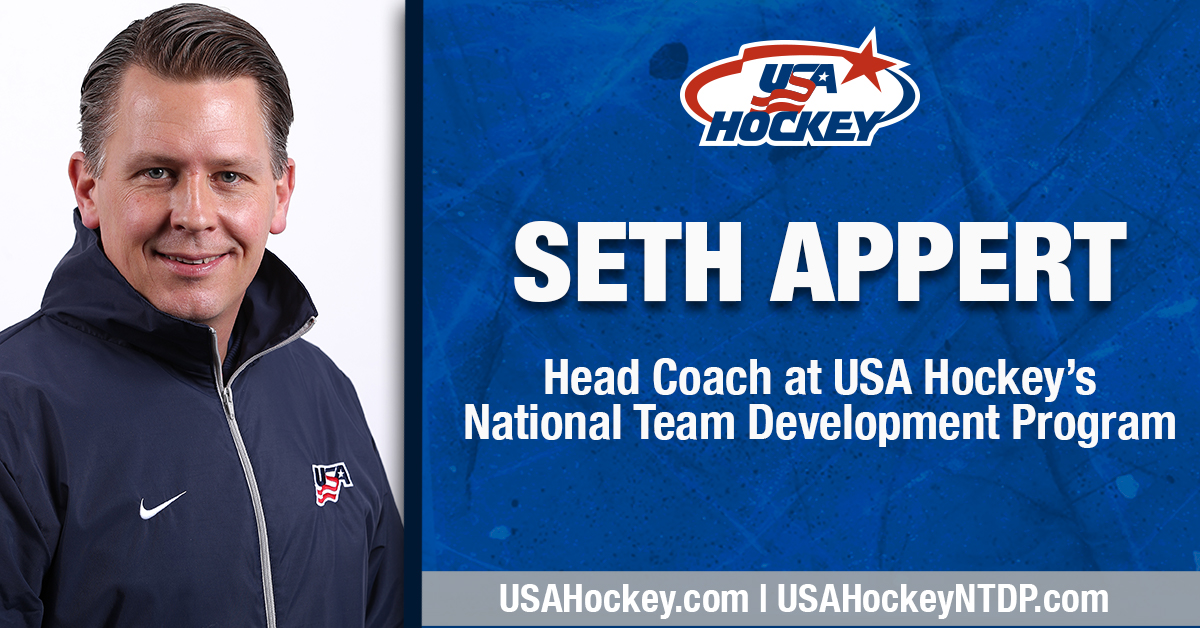 PLYMOUTH, Mich. -- Seth Appert, with more than two decades of coaching experience, has been named a head coach of USA Hockey’s National Team Development Program it was announced today by USA Hockey. Appert is currently serving as an assistant coach with the U.S. Men’s National Team at the 2017 IIHF Men’s World Championship.

“We’re excited to have Seth join the NTDP,” said Jim Johannson, assistant executive director of hockey operations for USA Hockey. “He brings a lot of passion and knowledge to the table and is someone we really feel like will be a terrific coach for the young players that are part of the NTDP and also a great mentor for our intern coaches.”

In addition to currently being on the coaching staff for the U.S. Men’s National Team, Appert also served as an assistant coach for the 2017 U.S. Men’s National Under-18 Team that won the gold medal at the recently completed 2017 IIHF Under-18 Men’s World Championship.

U18s play host to Youngstown prior to Kroger College Series games against Boston University and Yale University; U17s travel for a pair of USHL matchups

Camp to be held March 20-24 at USA Hockey Arena

“Seth’s experience level, connectivity in the sport and commitment to development are characteristics that were important to us,” said Scott Monaghan, senior director of operations for USA Hockey’s National Team Development Program. “We look forward to welcoming him and his family to Plymouth.”

A former president of the American Hockey Coaches Association, Appert spent the nine seasons prior to taking over the head coaching reigns at RPI as an assistant coach at the University of Denver where he helped lead the Pioneers to a pair of NCAA titles, three WCHA playoff championships and two WCHA regular-season titles.

“I’m honored to have this opportunity,” said Appert. “and I look forward to having a chance to work with the staff currently in place to help strengthen hockey in our country through our efforts at the National Team Development Program and across USA Hockey. I’m excited to meet and get to know our young men upon return from the world championship.”

In his 20 years in the collegiate coaching ranks, Appert has recruited and helped develop 13 All-Americans, 37 all-league selections, four Players of the Year, four Hobey Baker Finalists and 23 players who have gone on to play in the NHL.

His other USA Hockey coaching experience includes two stints as head coach (2008, 2011) and one as assistant coach (2007) of the U.S. National Under-18 Select Team that competed in the Ivan Hlinka Memorial Cup.

Appert and his wife Jill have two daughters, Addi and Campbell.

Fohr, who will coach the U.S. Men’s National Under-18 Team in 2017-18 along with Appert, recently completed his sixth season with the NTDP as an assistant coach. He has served as an assistant coach for Team USA in three International Ice Hockey Federation Under-18 Men's World Championships, helping the U.S. collect gold medals in 2015 and 2017 and a silver medal in 2013. During his tenure with the NTDP, he has served on the bench for one first-place finish (2014) and one second-place showing (2012) at the World Under-17 Hockey Challenge.