AMHERST, N.Y. – Having two full days of competition under their belts, the participants at USA Hockey’s Boys Select 16 Player Development Camp entered the third day of camp looking to make an impact. Day 3 is generally where certain players and teams begin to separate themselves from the pack in hopes of earning a spot in the Thursday’s camp all-star game.

Team White and Team Kelly opened the day’s action with a closely contested first half that ended in a 1-1 tie.

Team Kelly’s Luc Laylin (St. Michael, Minn.) scored the first goal, converting after Andy Perrott (Columbia Station, Ohio) fired a textbook far-side leg pad shot that found its way right onto Laylin’s stick on the rebound for an easy put-back. Unfortunately for Team Kelly, it was to be its only goal of the day.

Team White answered back rather quickly, taking advantage of the first power play of the day. Camping himself on the edge of the right faceoff circle, Grant Silianoff (Edina, Minn.) received a picture-perfect cross-ice pass from Carter Bailey (Bismarck, N.D.) that yielded a wide-open net and an easy goal.

In the second matchup of the day, Team Columbia and Team Orange collided in what was anticipated to be a high-scoring affair. Team Orange came into today as the top-scoring team in camp with 11 goals in two days, while Team Columbia was tied for third with nine goals scored. But in a somewhat surprising turn of events, the two teams produced a tight, physical contest that saw Team Orange remain undefeated with a 2-1 victory. Lukas Svejkovsky (Point Roberts, Wash.) tallied the game-winning goal with 52 seconds remaining in the first half, while goaltender James Burmeister (Greenwood, S.C.) made 13 second-half saves to secure the win.

In Game 3, Team Forest found itself in a shootout for the second straight day, needing extra frames to decide its game against Team Red. The shootout would not be as kind to the Forest side today as Team Red improved to 2-1-0-0 behind shootout goals from Tyler Kostelecky (Maple Grove, Minn.) and Jayden Struble (Cumberland, R.I.).

The penultimate game of the evening provided the most excitement. An offensive explosion from both teams in the second half saw Team Black and Team Grey score four goals apiece in the final 25 minutes.

Trailing 6-3, Team Grey was scrambling in an attempt to tie the game in the final moments, managing to tally two goals with just under two minutes to play. But despite countless chances, they couldn’t get the equalizer as Team Black goaltender Cal Sandquist (Evergreen, Colo.) survived a flurry of shot attempts in the closing seconds. An empty-net goal for Team Black sealed the 7-5 win.

The final game of the day saw Team Gold take down Team Blue, 4-2.

Day 4 will commence tomorrow morning at 11 a.m. ET when Team Grey takes on Team Royal. Visit TeamUSA.USAHockey.com for all the news and details. 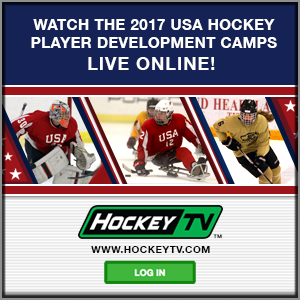