In the first day of international competition at the 2017 World Junior Summer Showcase, USA White topped Finland, 4-2, while USA Blue fell to Sweden, 4-3.

All four teams return to action tomorrow when USA Blue faces off with Finland at 1 p.m. ET and USA White plays Sweden at 4 p.m. ET. Tickets are still available here and at USA Hockey Arena Box Office and all games will be live on HockeyTV.com.

Three different players tallied a goal and assist as USA White topped Finland, 4-2, in the opening game of the 2017 World Junior Summer Showcase.

USA White regained the lead 6:50 into the middle stanza when Jack Badini (Old Greenwich, Conn.) beat Luukkonen with a wrist shot from the top of the right circle off assists from Max Gerlach (Burnsville, Minn.) and Dylan Samberg (Hermantown, Minn.).

With 6:48 remaining in the period, Janne Kuokkanen was able to knot the score at two apiece by skating in alone and firing a high shot past Dylan St. Cyr (Northville, Mich.).

Just 1:23 into the final frame, Gerlach made it 3-2 for USA White by taking a pass from Ivan Lodnia (Novi, Mich.), wrapping around the net and tucking the puck past a sprawled Luukkonen.

USA White claimed a two-goal advantage with 7:13 to play when Barratt forced a turnover, allowing Mittelstadt to pick up the puck, skate in alone and tuck a backhanded shot under the crossbar.

Oettinger, who started in goal for USA White, saw 31:01 minutes of play and finished with 10 saves on 11 shots. In 28:59 minutes of action, St. Cyr stopped eight of the nine shots he faced in relief.

USA White returns to action tomorrow when it takes on Sweden at 4 p.m. ET.

Both teams traded chances in the first 10 minutes, but neither could convert as Oliver Wahlstrom (Quincy, Mass.) saw a pair of chances turned aside before goaltender Joseph Woll (St. Louis, Mo.) was forced to block a series of Sweden chances to keep the game scoreless.

Then, with just under three minutes to play in the period, USA Blue tallied a pair of goals to enter the first intermission with a 2-0 lead. Brady Tkachuk (St. Louis, Mo.) put USA Blue on the board with 2:59 remaining when he redirected a shot from Chad Krys (Ridgefield, Conn.) while on the power play. Sean Dhooghe (Aurora, Ill.) connected just 25 seconds later when Tufte entered the zone and dropped the puck back for him to wire a wrist shot past Sweden goaltender Filip Gustavsson.

In the middle stanza, Woll was again called upon early before Sweden’s Jesper Bratt found off a loose puck between the hash marks and converted at the 13:08 mark.

USA Blue gained a 3-1 advantage with 3:55 remaining in the stanza when Cockerill batted home a rebound off a shot from Adam Fox (Jericho, N.Y.) that was initially redirected in front by Tufte. Just 1:44 later, Bratt tallied his second of the game on a breakaway to bring Sweden back within one.

Timothy Liljegren of Sweden tied the game with 4:29 remaining in the third before Fredrick Karlstrom netted one with nine seconds remaining to give Sweden the 4-3 victory.

USA Blue returns to action tomorrow when it faces Finland at 1 p.m. ET.

The World Junior Summer Showcase features some of the top players under the age of 20 from four nations - the U.S., Canada, Finland and Sweden - auditioning for a spot to represent their country in the 2018 International Ice Hockey Federation World Junior Championship, which will take place Dec. 26, 2017 - Jan. 5, 2018, in Buffalo, New York. 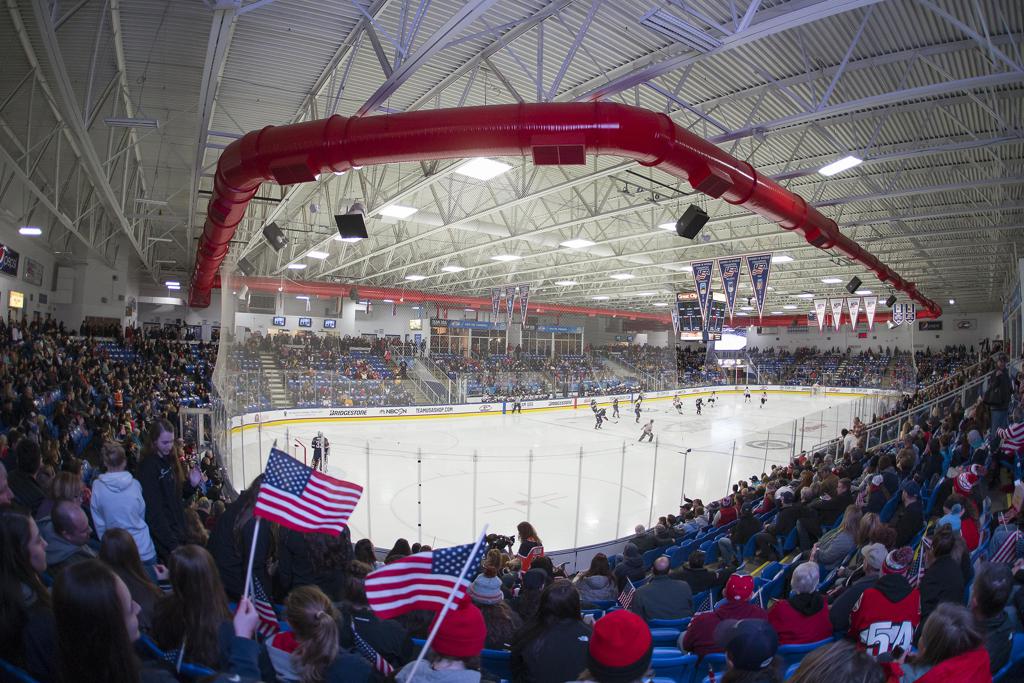