U.S. and Czech Republic face off at 4pm ET in Buffalo at KeyBank Center

THE SERIES VS. THE CZECH REPUBLIC
Team USA is 11-1-1-7-1 (W-OTW-OTL-L-T) all-time in 21 meetings against the Czech Republic. In nine playoff round meetings, the U.S. is 6-2. The two teams have met in the bronze medal game just once, when the Czech Republic edged the U.S., 2-3, in overtime at the 2005 IIHF World Junior Championship in Grand Forks, North Dakota, and Thief River Falls, Minnesota.
Its last playoff meeting came in 2016, when an Auston Matthews hat trick and 28-save shutout by Alex Nedeljkovic led the U.S. over the Czechs, 7-0, in the quarterfinals.
On home ice, the U.S. is 1-1 in medal games. After falling to the Czechs in 2005, the U.S. beat Sweden, 4-2, to win the bronze at the 2011 IIHF World Junior Championship here in Buffalo

THINGS WORTH MENTIONING
A medal tonight would give the U.S. three-straight World Junior Championship medals for the first time in U.S. history ... Brady Tkachuk
(3-5–8) has tallied at least one point in every U.S. game. Both his father, Keith (1992), and brother, Matthew (2016) have won IIHF World Junior Championship bronze medals … Kieffer Bellows has seven goals, which is tied for second-best all-time by a U.S. player in a single World Junior Championship while his nine career WJC goals is one shy of the Top 10 all-time list, which can be found here ... Yesterday, Taylor Heise was named captain of the 2018 U.S. Under-18 Women’s National Team with Gracie Ostertag, Dominique Petrie and Madeline Wethington tabbed alternate captains. The team opens the 2018 IIHF Under-18 Women’s World Championship this Saturday (Jan. 6) against Sweden ... On Jan. 1, USA Hockey announced its rosters for the 2018 U.S. Olympic Men’s Ice Hockey Team and Women’s Ice Hockey Teams and 2018 U.S. Paralympic Sled Hockey Team.

CHANCE FOR THREE-STRAIGHT ON THE LINE
This is the third-straight year the U.S. will be playing in an IIHF World Junior Championship medal game after winning bronze in 2016 and gold in 2017. A medal tonight would give the U.S. three-straight World Junior Championship medals for the first time in U.S. history. Its best stretch in tournament play came from 2003-08, when the U.S. reached a medal game five-straight times, earning gold in 2004, bronze in 2007 and fourth four times (2003, 2005, 2006, 2008). Prior to the tournament format change in 1996, the U.S. also finished fourth or better three-straight years in round robin play, when it earned a bronze medal in 1992 and fourth place finishes in 1991 and 1993.

BELLOWS, FOX, MITTELSTADT NAMED TOP 3 U.S. PLAYERS
Upon the conclusion of last night's semifinal game, Kieffer Bellows (Edina, Minn./Portland Winterhawks), Adam Fox (Jericho, N.Y./Harvard University) and Casey Mittelstadt (Eden Prairie, Minn./University of Minnesota) were named the Top 3 U.S. Players of the tournament, as selected by the coaches.
In six games, Bellows tallied seven goals, which is tied for the tournament lead. Among tournament defensemen, Fox ranks fourth in points with five (1-4) while Mittelstadt leads the tournament in points (10) and is tied for second in assists (6). 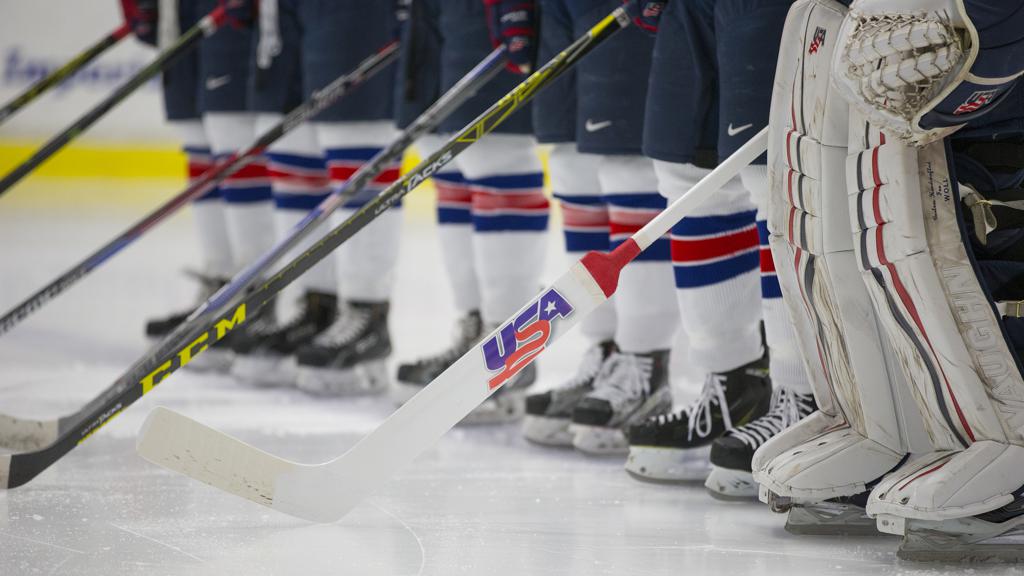