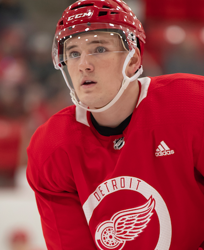 Dallas native Ryan O’Reilly considers Detroit a home away from home. He played a portion of his youth hockey with Little Caesars, so it was only fitting that he was on the ice at Little Caesars Arena last week, skating at the Detroit Red Wings 2018 Development Camp.

For O’Reilly, it was a case of familiar surroundings in more ways than one.

Detroit’s fourth-round pick in the 2018 NHL Entry Draft, O’Reilly attended USA Hockey’s National Player Development Camps in 2015, 2016 and 2017, so being back at an elite-level summer camp was nothing new.

“Growing up doing all those USA Hockey camps, especially the three years I did them in Buffalo, it gets you pretty familiar with these situations,” said O’Reilly, who scored 21 goals with Madison in the USHL last season.

“You don't know anyone and you don't have any chemistry yet, so you've got to find a way to showcase yourself and your skills.”

O’Reilly, a 6-foot-2 forward, registered at least a point in each camp, topping out with four assists last summer at the Boys Select 17 Camp. He made strides off the ice as well, learning to build chemistry quickly in an environment designed to prepare the nation’s best players for the rigors of international tournament play.

“It’s fun meeting the guys each year, and the camps give you a way to try to fit yourself in with the group,” said O’Reilly. “Some of the best times are definitely in the dorms, joking with your roommates, bonding with the team and just building chemistry with the guys there. That’s kind of what those camps are all about – building chemistry with your age group from throughout the U.S. – and it's just fun to get on the ice with all those guys and showcase yourself and have fun and make plays.”

The University of Denver prospect did more of the same at Red Wings camp, battling with and against four former Detroit first-rounders and his nine fellow 2018 picks. The five-day camp ended June 30 with a spirited red and white scrimmage, which O’Reilly finished in fine form on the winning side. In between, he learned the Red Wings’ way on and off the ice, an experience that included meetings with the coaches and a cooking class with the team dietitian.

“It's definitely awesome to come to one of these camps being a draft pick and play with guys that you kind of got distant with over the years and meeting all the prospects and the staff,” said O’Reilly. “I thought I had a good camp and it was good to be back in Detroit. It was really fun; I had a blast.”