Saturday was the final day of camp in Chicago

Check back for daily updates from training camp as Team USA aims for a fourth straight Four Nations Cup title. 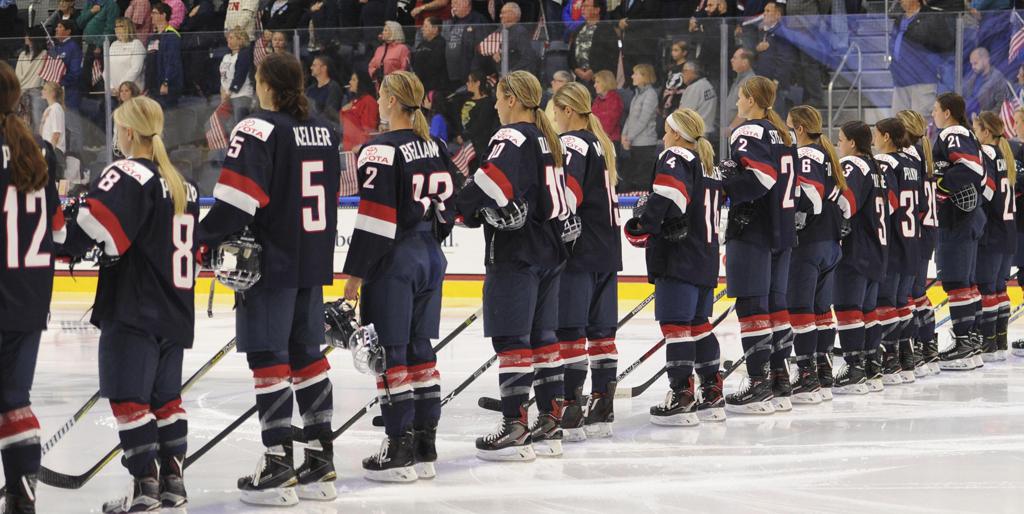 Saturday marked the final day of training camp for the U.S. Women’s National Team at the MB Ice Arena in Chicago. The team will travel to Saskatoon for the Four Nations Cup tournament tomorrow (Sunday).

FINAL PREPARATIONS
Team USA began making its final preparations for the Four Nations Cup tournament today, starting with an off-ice session and then continuing with an afternoon practice. During the strength and conditioning session, players honed in on their hand-eye coordination skills and then went through a circuit of exercises before taking to the ice for its final practice in Chicago as a team.

IMPRESSIONS FROM THE WEEK
Megan Bozek (Buffalo Grove, Ill.), Kendall Coyne (Palos Heights, Ill.) and head coach Bob Corkum (Salisbury, Mass.) shared their impressions from the week of training in Chicago, and their excitement for the upcoming Four Nations Cup.

“It’s been an awesome five days here in Chicago. I think everyone’s excited to be back.” -Coyne

“With our new coaching staff and especially being in Chicago, we got a warm welcome from the Blackhawks, it’s been great.” -Bozek

Watch the video for the full interview.

PACKING UP
Before exiting the rink, players packed their gear, loaded the equipment truck, and said their goodbyes and thank yous to the kind staff at MB Ice Arena for its incredible hospitality all week. 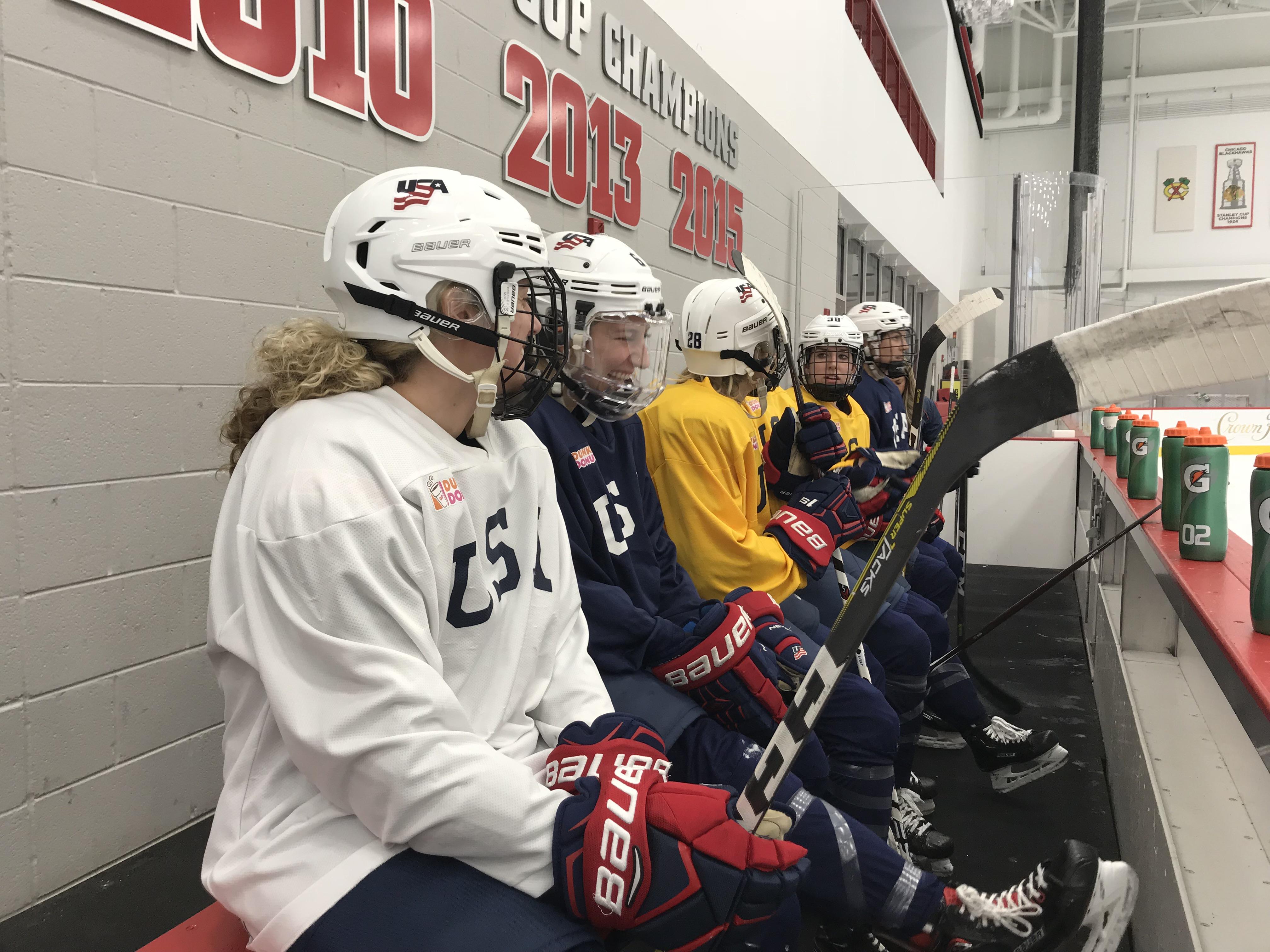 The fifth day of camp was highlighted by a morning off to get some much-needed rest after last night’s scrimmage game, followed by an afternoon on-ice practice, and strength and conditioning session.

ALL ABOARD
The full team of 23 players, including the 11 NCAA players, assembled in Chicago this morning for its first day of practice as a team. Some players arrived early enough to make it to team lunch at the hotel, and others were already getting settled in at the rink when the team arrived.

TAKE FIVE:
Caitrin Lonergan (Roslindale, Mass.), a forward at Boston College, joined camp on Friday. Though she has worn the USA sweater before, the Four Nations Cup will mark the first time that she will skate for the U.S. Women’s National Team.

When did she start playing hockey: I started playing hockey when I was 3 years old. My first memory of the game was pushing around two stacked milk crates on the ice learning to skate for the first time with the Hyde Park Learn to Skate program.

Sports she has played other than hockey: Soccer, lacrosse and rowing.

What she wants to do after hockey: I want to coach at a Division 1 College. I want to give back everything I possibly can to a sport that has given me so much in life.

Best advice she’s ever been given: “Never be too high and never be too low. – Joel Johnson. I use this advice that Joel gave me to prepare for each game I play. It’s something I remind myself when my energy can be too high or too low. I try and always find a balance between the two.

What it means to her to wear the USA jersey: It would be an honor wearing the sweater knowing the great players who have worn it before me. 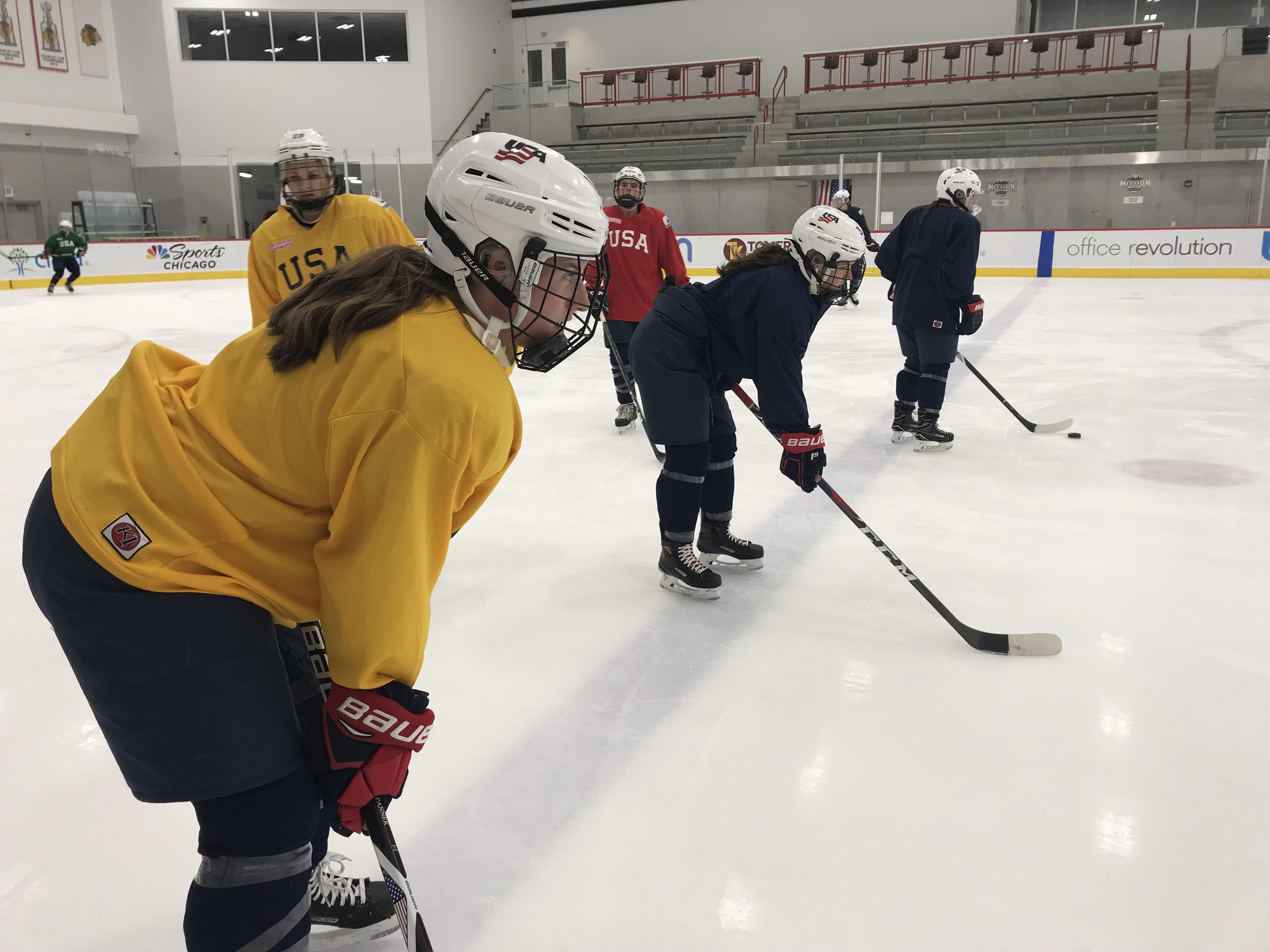 The fourth day of the U.S. Women’s National Team pre-tournament training camp at MB Ice Arena was a gameday complete with a morning skate, team pregame meal and scrimmage against a local boys team from the Chicago Mission hockey club.

BEHIND THE SCENES
Before morning skate, the staff at MB Ice Arena gave the players a behind-the-scenes tour of the Chicago Blackhawks training space and dressing room. The new facility is state-of-the-art, the players couldn’t help but stop and take photos.

GETTING GAME-READY
Today’s scrimmage gave the U.S. women an opportunity to play a game as a team for the first time this week. Hometown fan favorite Kendall Coyne (Palos Heights, Ill.) opened the scoring in the first period and was met with a huge applause from the crowd. Hilary Knight (Sun Valley, Idaho), Dominique Petrie (Hermosa Beach, Calif.) and Hannah Brandt (Vadnais Heights, Minn.) added goals in the second. The third period was used as an opportunity to practice special teams. 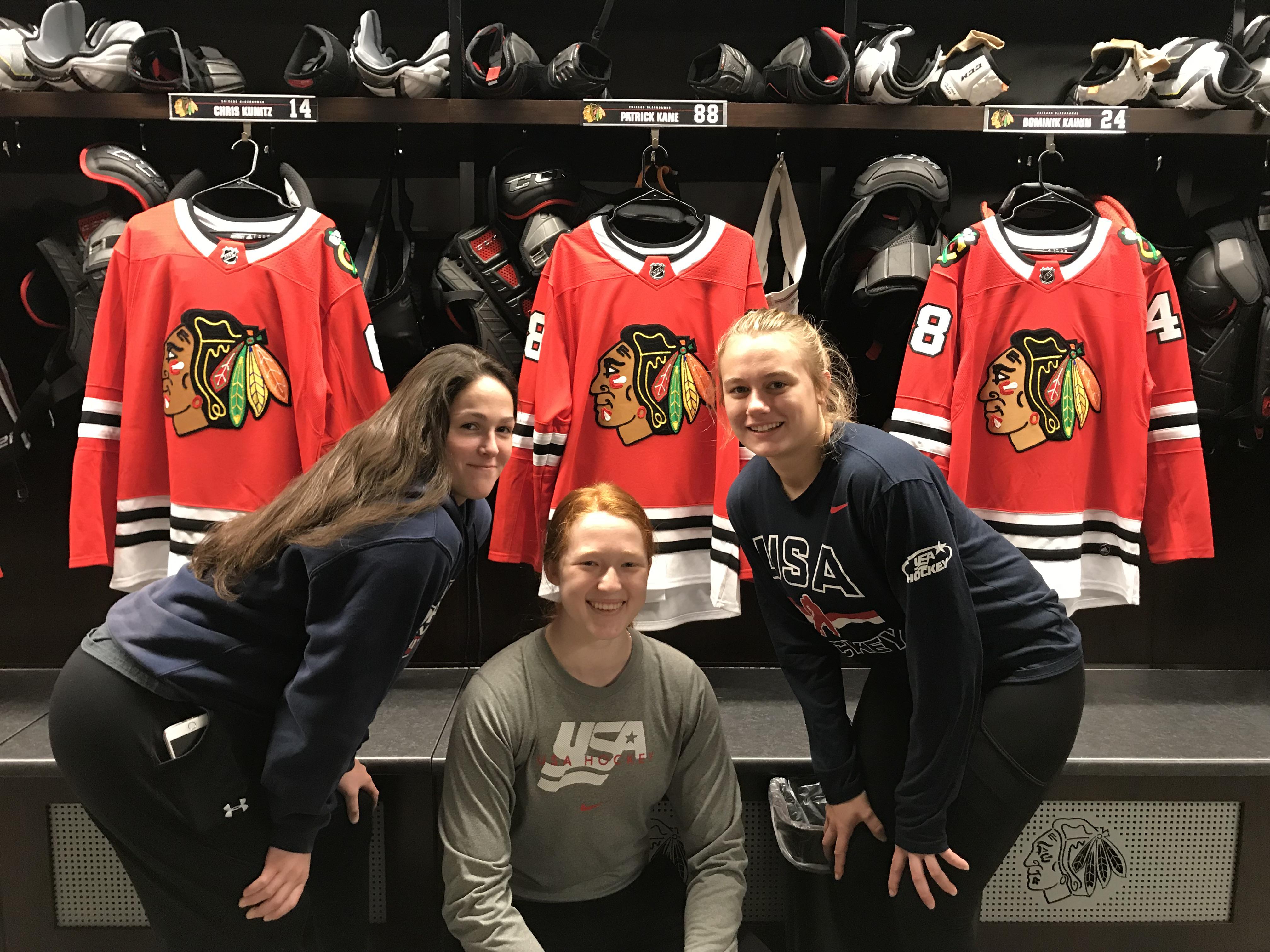 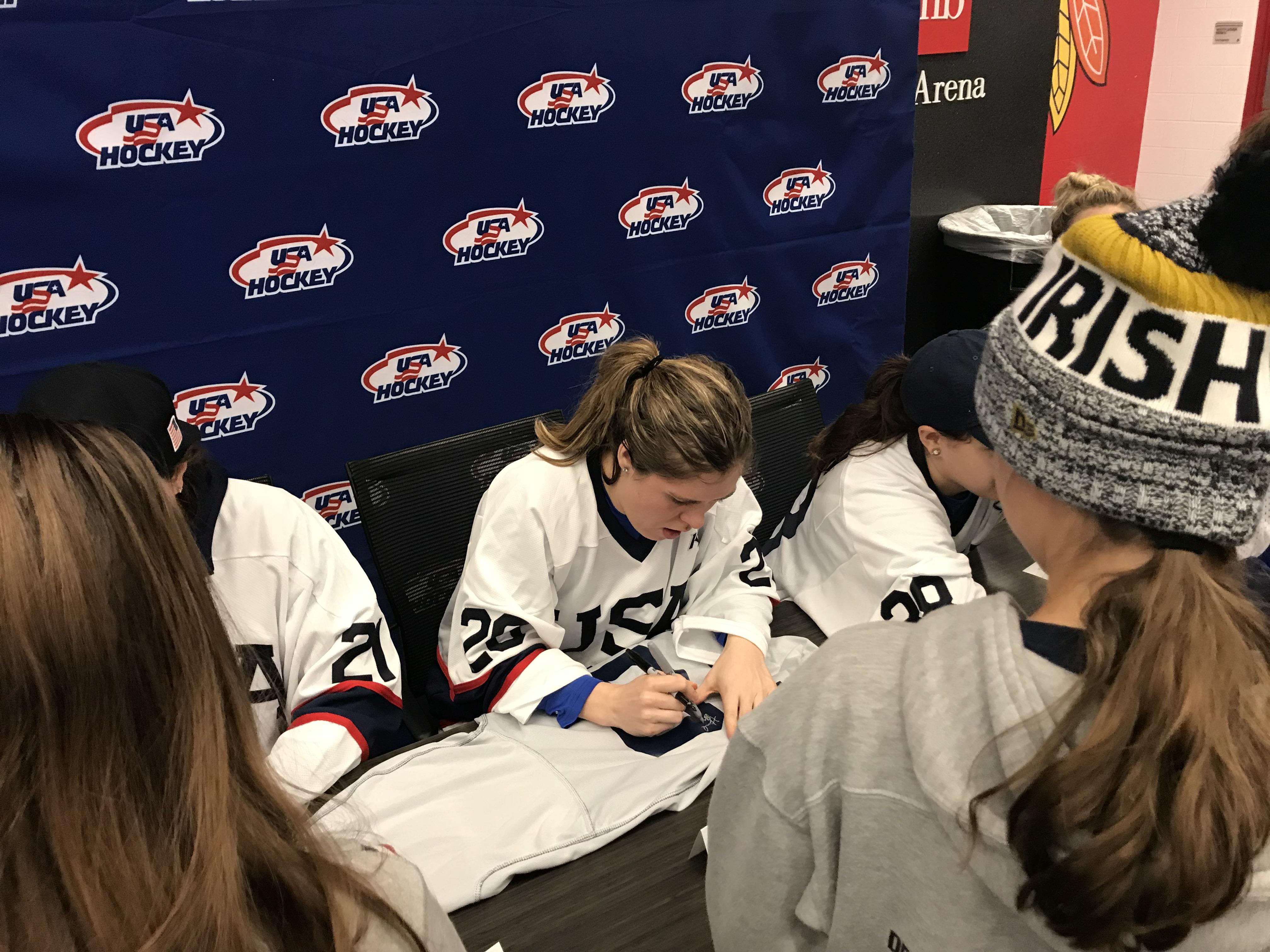 Today marks the third day of camp and it’s Halloween! Some members of the rink staff at MB Ice Arena were dressed in costumes in celebration of the day, but it was business as usual for the USWNT. The day opened with breakfast and an early on-ice session, followed by strength training. Players were given the afternoon off to explore the city or take some much-needed rest.

IN THE GYM
Today’s off-ice training session focused on muscle activation and movement patterns. Strength and conditioning coach Pete Friesen led the players through a circuit of exercises focused in those areas before players broke for lunch and headed back to the team hotel for their afternoon off.

WEDNESDAY WISDOM
Below is a selection of some of the U.S. players’ personal motto/favorite inspirational quotes that help them stay motivated to compete every day.

“If you can’t stop thinking about it, don’t stop working for it.” – Kacey Bellamy (Westfield, Mass.)

“Do whatever it takes.” – Brianna Decker (Dousman, Wis.)

If you’re not willing to go all the way, why go at all?” – Dani Cameranesi (Plymouth, Minn.)

“Set your goals high and don't stop until you get there.” – Dominique Petrie (Hermosa Beach, Calif.)

LOOKING AHEAD
Tomorrow (Thursday), the U.S. players will play a scrimmage game against a local team from the Chicago Mission hockey club at the MB Ice Arena. The game will start at 6:50 p.m. and is free and open to the public. Select members of the U.S. Women’s National Team will be doing an autograph signing immediately following the game for fans. 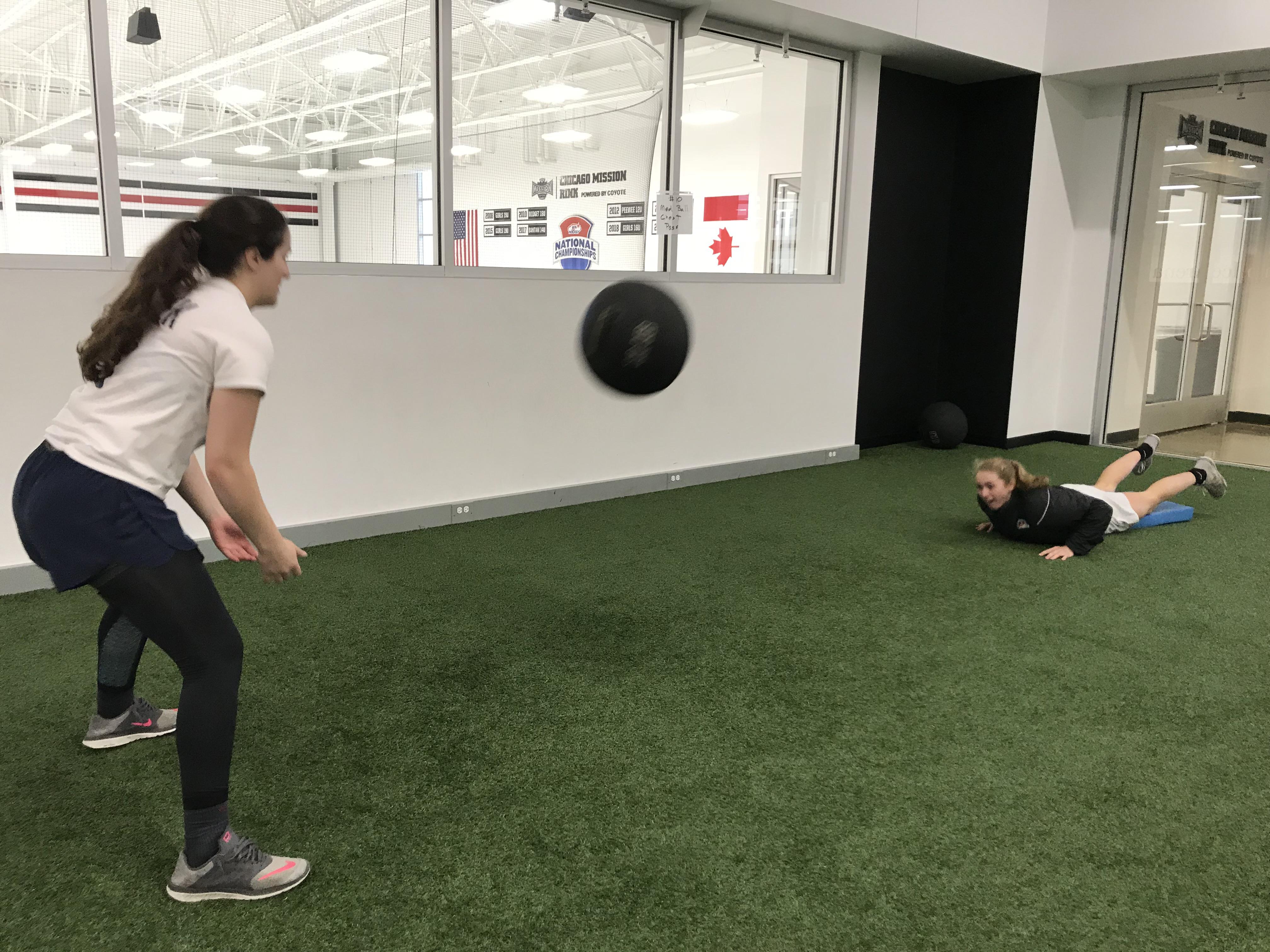 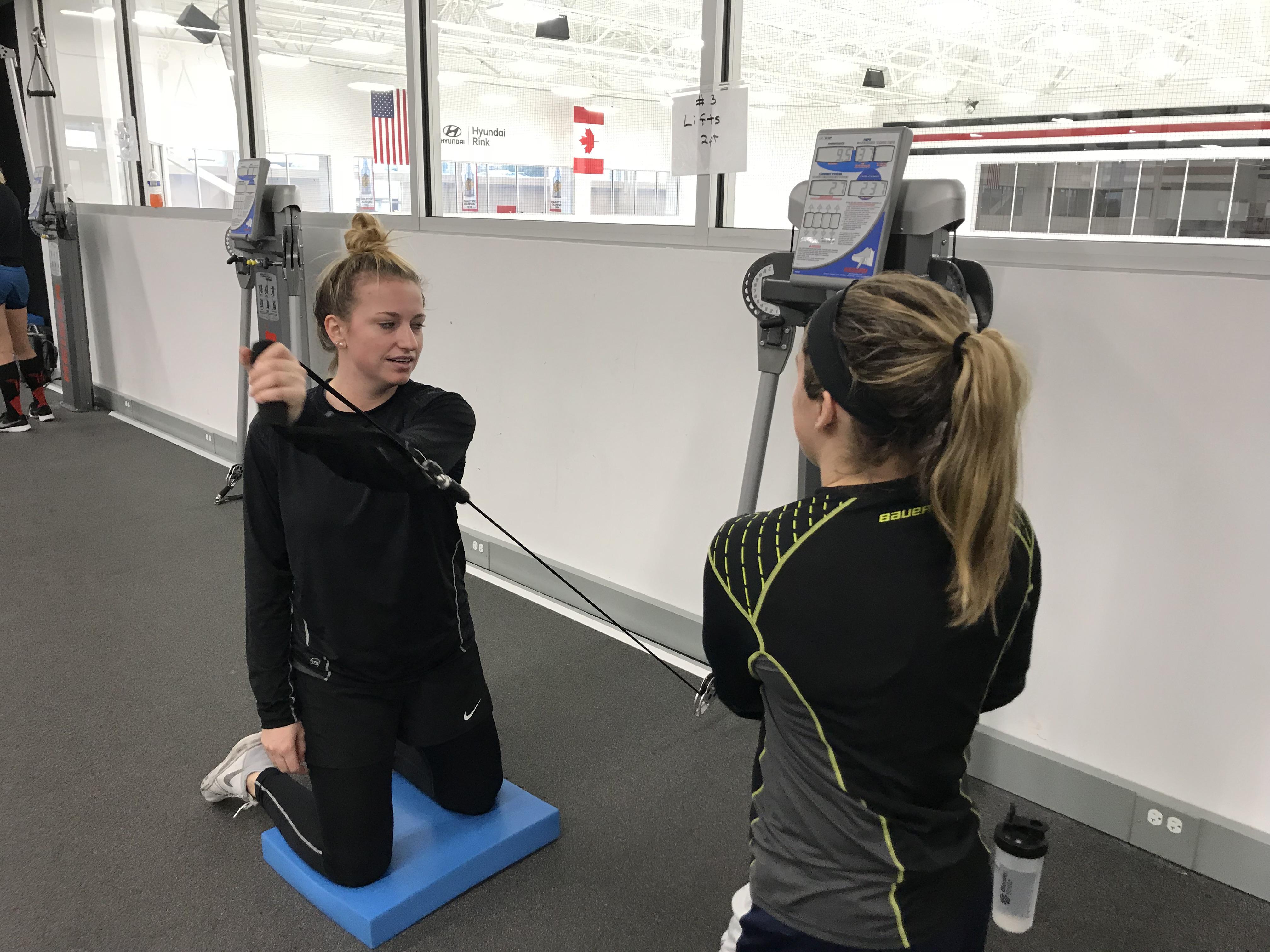 On the second day of camp, players and staff are starting to feel more at home at MB Ice Arena in Chicago. The day opened with an on-ice session followed by a strength and conditioning off-ice workout before lunch, and will finish with another session this afternoon, including a goalies-only skate before wrapping up the day.

INSPIRING THE NEXT GENERATION
Last night, members of the U.S. Women’s National Team helped out as USA Hockey hosted a clinic for local 12U and 14U girls hockey players. Hilary Knight (Sun Valley, Idaho) was among a group of players that helped the girls get ready for the clinic, tying skates and sharing some words of wisdom, while Kendall Coyne (Palos Heights, Ill.) and others were out on the ice helping to lead some of the drills with the girls.

A WELCOME DISTRACTION
During this morning’s off-ice training session, players took breaks between sets in the gym to poke their heads out and check out some of the Chicago Blackhawks practice, which was held on the rink just below.

GOALIES ONLY
This afternoon, goalies took the ice for a goalies-only session with goaltending coach Steve Thompson. Alex Rigsby (Delafield, Wis.), who is on the 2018 Four Nations Cup roster, will be joined by Under-18 program goaltenders Hannah Hogenson (Anchorage, Alaska) and Skylar Vetter (Lakeville, Minn.). While Rigsby has been around the program since she was a U18 in 2008, Hogenson and Vetter are both relatively new to the program. Both rookies have participated in camps with USA Hockey this summer and in previous years, and Vetter notably played with the U.S. Under-18 Women’s Select Team that competed in the 2018 Series vs. Canada this August in Calgary. 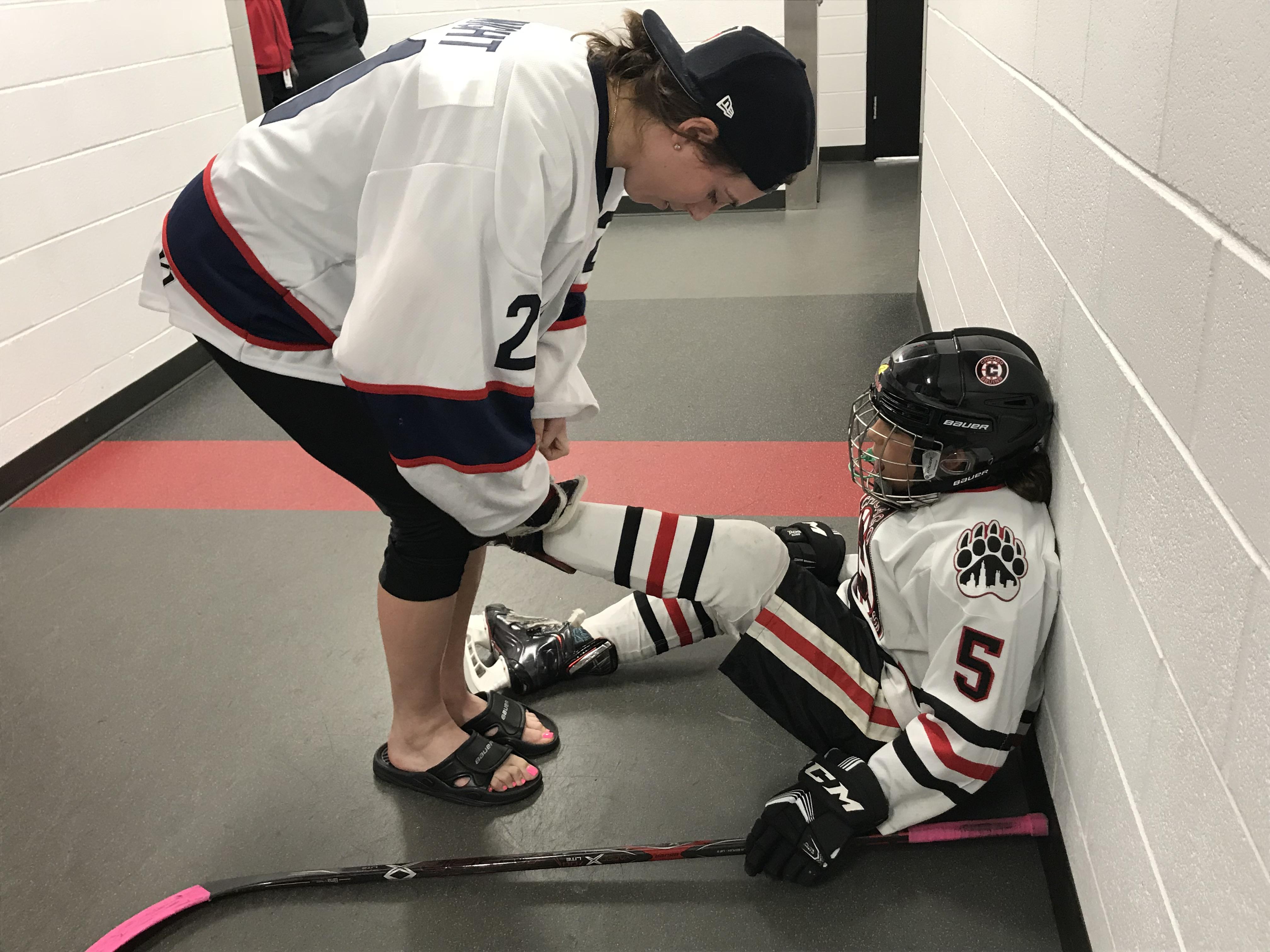 Players and staff converged in Chicago on Sunday (Oct. 28) to kick off camp at the Chicago Blackhawks community rink and training facility, the MB Ice Arena. Some traveled from just up the road to be here, including Under-18 player Abbey Murphy, a native of Evergreen Park, Ill., and others from as far as across the Atlantic ocean, as was the case for Sidney Morin (Minnetonka, Minn.), who plays for Linkoping HC in Sweden.

UNDER-18s AT CAMP
As part of the ongoing development process, Under-18 players Hadley Hartmetz (Phoenixville, Pa.), Caroline Harvey (Pelham, N.H.), Hannah Hogenson (Anchorage, Alaska), Murphy, Dominique Petrie (Hermosa Beach, Calif.) and Skylar Vetter (Lakeville, Minn.) are here at camp training alongside members of the U.S. Women’s National Team. They will be at camp until Friday, Nov. 2, training and staying with the USWNT until the rest of the rostered players, all active NCAA players, join up in Chicago to make final preparations as a team before the tournament.

"Being able to spend this week training with the Women's National Team is super exciting and I'm really looking forward to it," said Dominique Petrie. "It's a great opportunity for me along with the other U18s to learn and train from the best players. We are all extremely grateful and can't wait to get after it this week."

FRIENDS IN HOCKEY
Four players that arrived into Chicago early on Sunday joined up with the Chicago Blackhawks to be a part of its Celebrate Girls Hockey festivities. Megan Bozek (Buffalo Grove, Ill.), Amanda Kessel (Madison, Wis.), Gigi Marvin (Warroad, Minn.) and Shelly Picard (Taunton, Mass.) spent some time signing autographs for local girls hockey players and then were guests at the Chicago Blackhawks home game against the Edmonton Oilers.

STARTING OFF STRONG
The first day of camp opened with a welcome address from Jim Smith, president of USA Hockey, followed by an off-ice session led by strength and conditioning coach, Pete Friesen. The rest of the day includes an on-ice session and an opportunity to interact with local girls hockey players during a 12U and 14U clinic at MB Ice Arena. 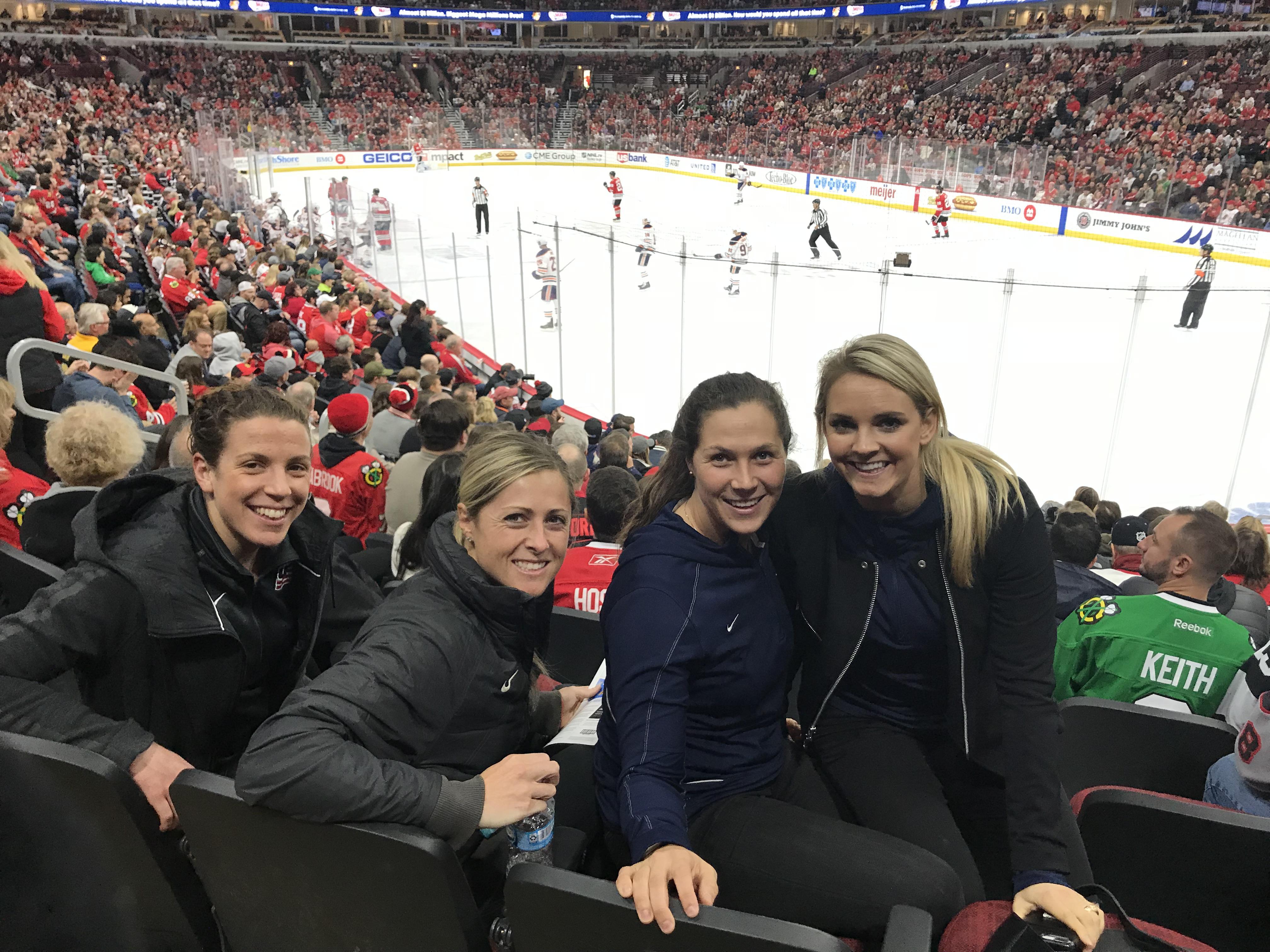 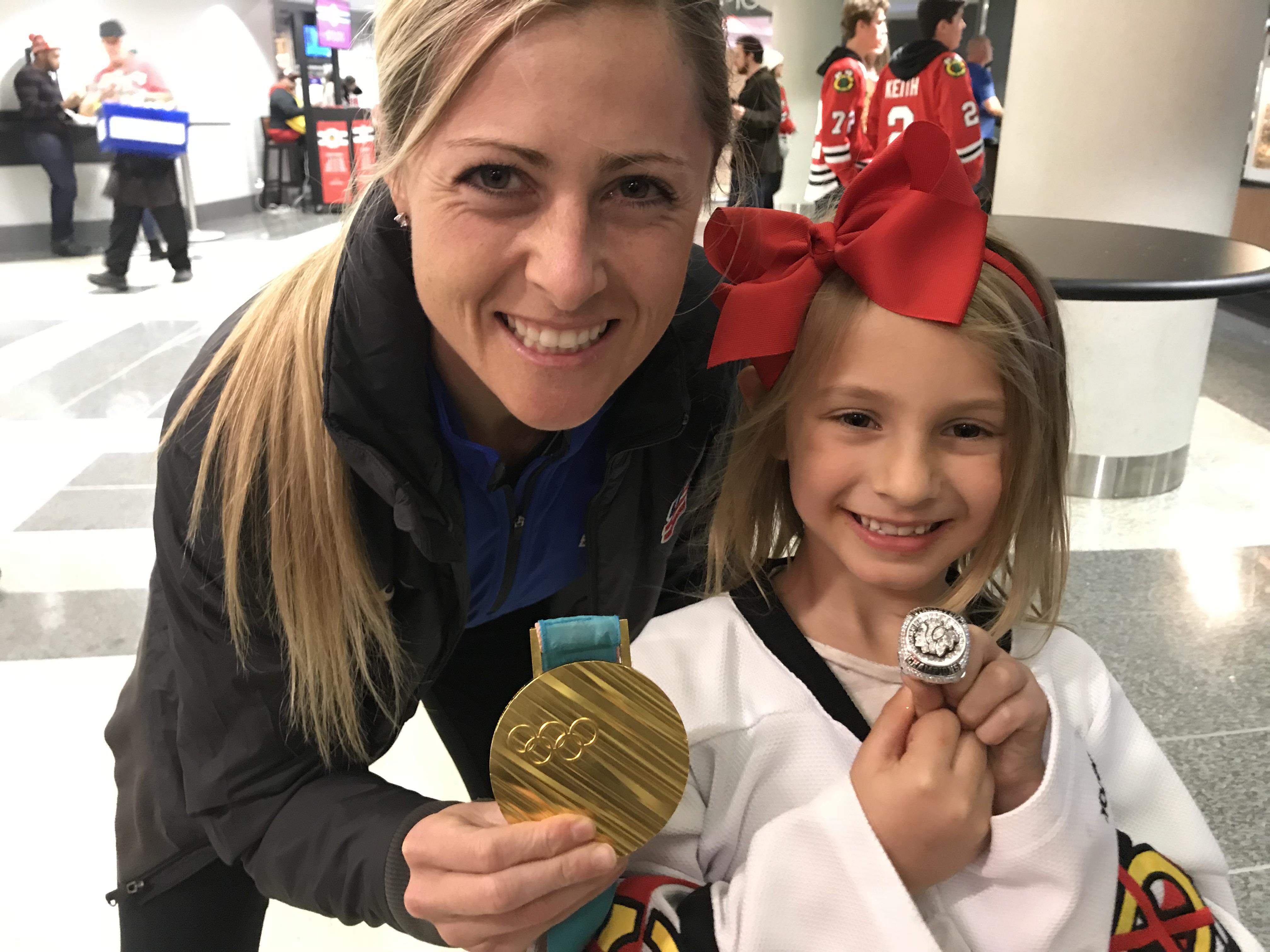 All practices will be held at the MB Ice Arena in Chicago. Practice times are subject to change.

*Scrimmage game is free and open to the public and will be followed by an autograph session with select players from the U.S. Women's National Team program.