The U.S. welcomes back nine returners as the Americans will try for an unprecedented fifth consecutive gold medal at the tournament, which takes place Jan. 6-13 in Obihiro, Japan.

“To have four in a row for the United States is pretty remarkable,” Crowell said. “I think the consistency within the program at this age group has been a big part of that. The young players keep coming up and I think they’re all better, so that speaks to what USA Hockey is doing to prepare our young females for these big events.”

The U.S. has played in the gold-medal game in all 11 Under-18 Women’s World Championships. The Americans have captured the gold medal seven times, including a history-making four consecutive championships.

They want to make it five straight this year.

“It’s a big number to think about,” Crowell said. “I think every year is a different experience with a different team, so we really have to focus on this year and winning this gold medal. If we can add to that historical figure, that’s great.”

Those nine returners helped the U.S. earn gold at last year’s Under-18 Women’s World Championship in Dimitrov, Russia. Included in the group is team captain Dominique Petrie, a current freshman at Harvard, who seeks her third straight gold medal.

“I think we have a nice blend of returning players, and a lot of fresh faces,” Crowell said. “Having a blend is important because you have the experience from people who have done it, and you also have the excitement and energy from new people seeking their first. The chemistry factor and creating a family environment in a short stint is a key piece to winning a gold medal.”

Among the nine returners are seven forwards and six of the top eight scorers from last year’s team.

“Abbey Murphy, Makenna Webster and Casey O’Brien formed one of the most dynamic lines in the World Championship last year,” Crowell said. “And they’re all back, which is exciting.” 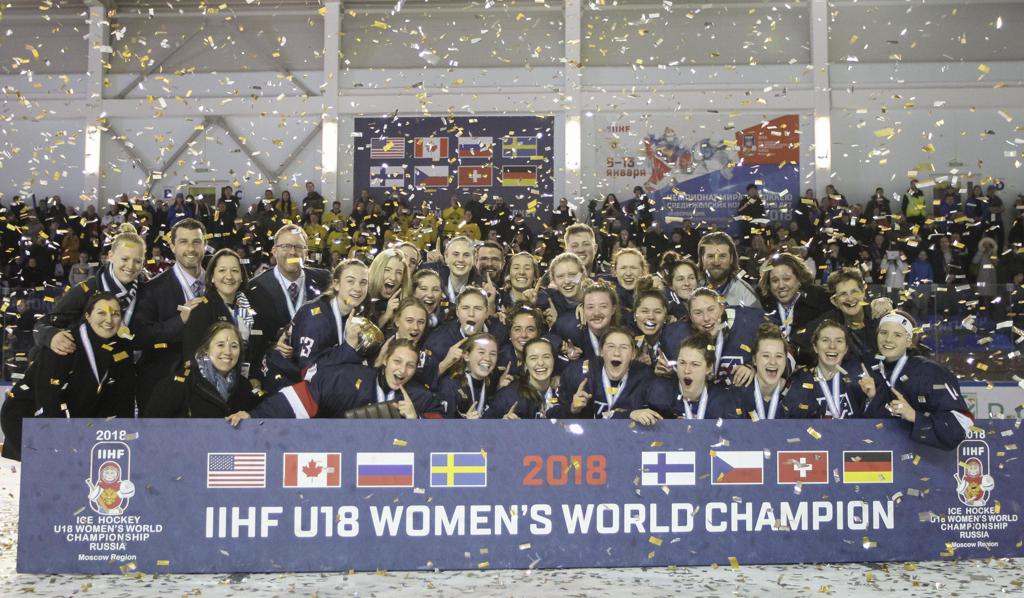 Hannah Bilka was the seventh-leading scorer on last year’s team with a game-winning, power-play goal and three points, while this year’s alternate captain, Katy Knoll, also scored twice, including once on the power play, and Sydney Shearen also provided an assist.

“The forward lines are definitely a fun puzzle to put together when you start with seven returners who have been through it,” Crowell said. “It’s a very talented group and off the ice they’re great people, too and they’ll take the new players under their wings and make them feel comfortable.”

“I think it’s an exciting group,” Crowell said. “Hadley and Maggie played key minutes for us last year and did a great job stepping up as young players. They’re a year older this year, they’re experienced, they know what it takes and they’re excited to take on a new role in terms of being leaders on the back end with so many new faces.”

Crowell is excited to have a dynamic group of newcomers joining Hartmetz and Nicholson. Included among them is Caroline Harvey, Lauren Bernard and Haley Winn, among others.

“They’re really tremendous players,” Crowell said. “They’re an exciting group who likes to move the puck. They skate well and they want to be offensive, which makes for a potent team.”

It helps that the group won last year’s tournament in Russia, which is about a 10-hour flight from the United States. It’s a similar journey to Obihiro, Japan.

“We were in Russia last year, which was unique and far,” Crowell said. “It’s not like playing in the U.S. or Canada. Those kids who have done that kind of trip and have played in those moments certainly help.”

The Americans hope that experience carries them to another gold medal.

“We’re very fortunate to have such a strong core of returning players,” Crowell said. “They’re the ones that will lead us and I think we have some great young talent, too, which makes for a nice blend.”